Air Force Combat Control Teams actually have their origins in WWII. Army parachutists would often miss the mark on their drop zone.

To combat this problem, the Army department instituted Army Pathfinders.

It was the Army Pathfinder’s job to parachute in prior to any large airdrops to provide drop zone coverage.

This is where the CCT motto, “First There” originated.

In WWII, Army Pathfinders were instrumental in the success of the Normandy invasion.

The name was later changed to Air Force Combat Controllers.

Airstrike control, communications capabilities, and expert airfield seizures are but a few of the operations to which a CCT is vital.

“The initial training “pipeline” for an Air Force Special Tactics Squadron Combat Controller costs twice as much time and sweat as does the journey to become a Navy SEAL or Delta operator.”

“Before their training is complete someone brainwashes these guys into thinking they can climb like Spiderman, swim like Tarzan, and fly like Superman — and then they have to prove they can, if they plan to graduate.”

Combat Controllers are highly specialized and must undergo extensive training in scuba, snowmobiling, and parachuting.

To become a Combat Controller in the United States Air Force, there are specific requirements and qualifications one must meet, which include:

Prior to becoming an Air Force CCT you must successfully complete the Air Force Basic Military Training course, commonly referred to as Boot Camp.

However, if you desire to be an Air Force CCT, the USAF recommends that you prepare prior to entering the arduous CCT Pipeline.

However, to become a CCT, airmen must past the CCT physical ability and stamina test (PAST).

The PAST consists of:

To aid in that effort, the Air Force provides an easy-to-follow 21 Day Fitness Program for Air Force Special Operations candidates.

Air Force Basic Military Training is eight and a half weeks in duration.

Skills and fundamentals taught during the rigorous eight and a half weeks during Air Force Basic Military Training include a multitude of topics and skills too numerous to mention here.  However, a few include:

Please note that this list is but a basic overview of the skill taught during Basic Military Training and is not all-inclusive.

After Basic Military Training, the long, onerous, difficult journey to become a CCT begins in earnest.

The path to becoming a USAF CCT is not for the faint of heart, nor the weak of mind.

It is estimated that the arduous CCT training pipeline attrition rate historically waivers between 70 to 80 percent.

Training is extensive and makes USAF CCTs among the most highly trained members of the United States Armed Forces.  CCTs must maintain their skills and must requalify and maintain currency in many of these skills throughout their careers.

Special Tactics AST is designed to produce mission-ready CCTs for the Air Force and the United States Special Operations Command.

Staff Sergeant Jacob Poulliot, a CCT who has been deployed to Afghanistan and Iraq, as well as participated in exercises in Korea, Australia, the Philippines, and Indonesia explains the training of a CCT, “We go through a very rigorous training process, which basically prepares us for any type of situation that we could encounter … It makes us better operators working in every type of environment.”

CCTs will also earn the right to wear:

Continued training is a part of life for a Combat Controller.

In addition to experience in reconnaissance, terminal control, and combat enabling tasks, prior to being awarded award of AFSC 1C251, CCTs must also complete the following courses:

How Much Are Air Force Combat Controllers Paid?

Pay for an Air Force CCT is identical to all other enlisted personnel (in all branches), based on an airman’s rank and length of service.

CCTs may also be entitled to other forms of compensation including basic allowance for housing (BAH) and base allowance for subsistence (BAS) pay if eligible.

It’s important to note that due to the large attrition rate of Combat Controllers, Air Force CCTs are often eligible for sizeable enlistment and selective re-enlistment bonuses based on the current needs of the Air Force.

What’s Life Like as an Air Force Combat Controller?

The Air force defines the mission of a CCT as:

In a nutshell, a USAF Combat controller provides command, control, communications, intelligence, surveillance and reconnaissance (C3ISR) to assist, control and enable the application of manned and unmanned, lethal and non-lethal airpower in all geographic and environmental conditions across the full spectrum of military operations.

This includes terminal control (air traffic control [ATC]) and targeting, and control of airstrikes (including close air support [CAS]) and the use of visual and electronic aids to control airheads and enable precision navigation.

The sheer scope and details of the seemingly overwhelming duties and responsibilities of a CCT, however, are far too involved and numerous to list here.

As stated earlier, a career as a CCT is not for the faint of heart, nor weak of mind.  CCTs are “gung-ho” professionals who take great pride in what they do.  One CCT spoke of his experience on the career website glassdoor.com: 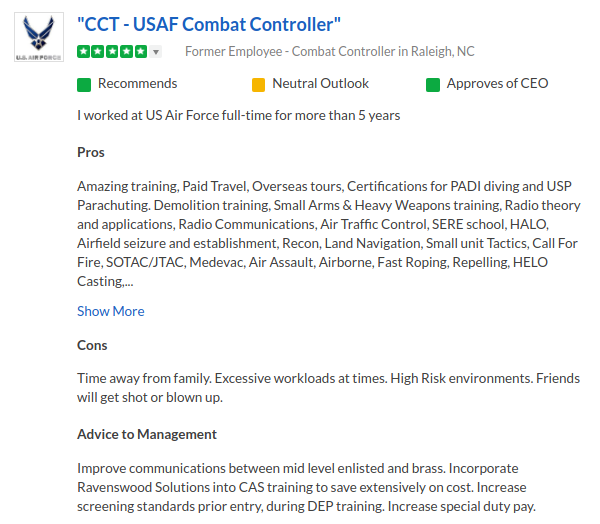 CCTs live and work by a set of standards.  They call them Special Operations Forces (SOF) Truths.  The SOF Truths are:

A CCT who asked to remain unnamed explains, “One of the ideals we embrace is the SOF truth that we invest in ideas, people, and equipment — in that order.  Because we have to embed with so many different SOF units, you not only have to keep up, but be better since you’re the outsider. Everywhere we go we have to prove ourselves over again. Each unit culture is different, so personality is a big thing for us during selection. You might be doing raids with Rangers one week to being underway with SEALs the next, and we need airmen who can get along with all of them when they show up.”

There are approximately 650 Combat Controllers serving in today’s Air Force.  So elusive and scarce are these “silent warriors” in the 321,444-strong USAF, that many airmen have completed a twenty-year career without ever having met a CCT.

Due to the peculiar duties performed by Air Force CCT, civilian opportunities are somewhat limited for CCTs looking to use all of the skills and experience learned and gained in their careers. Jobs with civilian military organizations such as DynCorp, Armed Maritime Security, and Academi are certainly options. There is also a smattering of positions for combat control instructors.

The CIA estimates that the United States is home to about a third of airports worldwide with 15,095. Former CCTs can certainly leverage their FAA-certification to become an air traffic controller.

CCTs leaving the Air Force can also use their security clearance (if active) to aid in their job search.

Just as we encourage all our Air Force airman, CCTs are strongly urged to take full advantage of their Post 9/11 GI Bill and all education opportunities afforded them during their time on active duty, such as the Air Force Tuition Assistance program and CCAF (Community College of the Air Force).

If a career in the United States Air Force is one of the options you are currently weighing …if you are not afraid to push your body to otherworldly limits …if you want to travel and are unafraid of the dangers and perils that an uncertain world our country faces all too often, a career as an Air Force CCT might just be your path.

Not only will you perform a valuable service to your country, but you will also be among the most elite members of the United States Armed Services.