It’s official, you are now on the path to becoming a United States Navy Sailor!

The paperwork is complete, you’ve met the height and weight standards, MEPS is complete, and you’re finally a member of the Navy’s Delayed Entrance Program (DEP).

Whichever career you decided to pursue in the Navy, the training and experience gained will become invaluable.

The next step is to begin training at the Recruit Training Command (RTC), otherwise known as boot camp, in Great Lakes, Illinois.

This article will give you a brief, but solid idea of what a recruit should expect.

Related Article – How To Prepare Physically For Navy Boot Camp

Before You Go To Navy Boot Camp

First things first, there are some things you should learn and memorize while in DEP. Have an idea of what the Navy core values are and what they mean to you — Honor, Courage, and Commitment.

You will be required to quote any one of the Eleven General Orders of a Sentry towards the end of your first week.

The Sailor’s Creed and the Chain of Command will follow you throughout your entire Naval career so ensure these are engraved into memory.

This information, along with what items are necessary to bring to RTC, is located online and at your local recruiter’s office.

When your ship date arrives, the yelling begins. Petty Officers will have you form up and listen to instructions while awaiting the RTC bus.

The first few days of boot camp is called In-Processing, and this is where medical, and dental is screened to ensure training can resume, your first military haircut, and picture IDs are taken.

Gear will be issued, the clothes you wore will be mailed back home and you will be allowed a short phone call (only about 30 seconds).

Be sure to leave a message if you do not get a hold of anyone because they might wonder why they received a box with your clothes in it.

Throughout these first few days, you will learn about the “ship” you’re living in, basic commands, classes, and how to stow uniforms.

At this point, you will take a DEP advancement test, where if you came in as an E-1 or E-2 and want to advance to the next rank this 30-question test is your ticket.

Among those first few things I mentioned in the beginning will be on it and you cannot get more than five questions wrong to pass.

More medical is completed and your first workout begins. Don’t give up!

Recruits will be required to complete their initial swim qualifications; jumping off a diving deck, swimming, treading water, and drown proofing.

For those that have wisdom teeth, these will be removed at this time and then you are Sick in Quarters (SIQ) for two days to rest.

Week 3 is a continuation of PT (physical training), folding gear, and inspections.

Additionally, recruits learn to stand watch, practice turning over (also how to turn over a 9mm pistol properly), and Marlinespike.

Marlinespike is the time recruits become educated on getting a ship underway, mooring it to a pier, and even an exercise on a man overboard drill.

This is also the time to practice seamanship skills which will be useful for Battle Stations.

Recruits earn their first ribbon called the National Defense Service Ribbon and most will earn their second medal after SAMT—Marksmanship Medal.

This is the highest award a Navy sailor can receive for weapons qualification; a Sharpshooter (S) or Expert (E) award receives a pin to attach onto the ribbon.

Another major event that happens during this week is a Drill Inspection.

It occurs on the way to and at the Pacific Fleet Drill Hall which is quite a distance from any barracks. Commands from the videotape will be executed and inspected.

Most of what recruits learned so far will be tested by other RDC’s brought to your ship.

Any penalty points received may result in Intensive Training (IT) by your RDC afterward so watch out for that!

When you get IT’d in your barracks, RDCs attempt to make the room “sweat”.

That’s when everyone is working out for so long and so hard that the moisture in the room accumulates onto the walls and ceilings and the room literally begins to “sweat.”

Related Article: 12 Best (and 3 Worst) Jobs In The Navy

Recruits will continue training and complete administrative tasks geared towards their future career this week.

They will attend briefings and more computer classes.

During week 6, recruits learn all about shipboard damage control, which means firefighting about a ship.

You will learn how to read Bulls-eyes located throughout ships, which tell you locations of specific compartments and fittings onboard.

These devices provide certain types of protection such as respiratory and eye protection used by the firefighting teams.

Extinguishing systems and Chemical, Biological, and Radiological (CBR) classes will also be taught at this time as they may be potential hazards you come across being in the military.

Recruits will also be trained to don gas masks in a gas chamber.

They will need to remove their mask, replace the filter cartridge while stating their full name and social security number as the room is filled with tear gas.

Be sure not to rub your eyes afterward, as it is a profound irritant and may induce vomiting as well.

Week 7 is the last full week of testing and training before graduation.

Each day will have a test, so this may be a stressful week for many.

There will be a second drill inspection, a final PFA (physical fitness assessment), zone inspection, uniform inspection, a “shipboard” firefighting exercise, and round out the week with Battle Stations.

To celebrate your accomplishments at RTC, recruits will attend a ceremony before graduation where they will remove their Recruit ball caps and replace them with ones that will let them be recognized as a United States Sailor in the Navy.

The final week at boot camp is mostly out-processing, pass-in-review, and yet more classroom and physical training.

If recruits fulfill all requirements, then they attend graduation.

Family members may be allowed to attend graduation and will need to be coordinated with each Sailor to be placed on an access list.

Ceremonial drill initiates the event, Pass-In-Review commences, and each Division arrives. The graduation begins promptly at 0900 and lasts about an hour and a half.

When it ends, recruits will be permitted weekend liberty prior to checking into their new command for A school.

Here’s just a sample of some of the jobs available to you after graduation (click here to see all of them):

How long is Navy Boot Camp?

Can you quit Navy Boot Camp?

Joining the military is a major commitment. Quitting is not an option; the Navy must find the recruit as unfit for duty either medically or psychologically and go through a separation process.

Keep in mind that this can result in a harsh separation, such as a bad conduct or dishonorable discharge.

However, most often it results in what’s known as a Entry Level Separation.

Can you fail Navy Boot Camp?

In the unfortunate event that a recruit fails their physical fitness test, swim qualification, or Battle Stations, they will be remediated or set back in training.

Failing a fitness test could place the recruit in a Fitness Improvement Team (FIT) that could potentially set back training by three to four weeks.

How much does Navy Boot Camp pay?

Depending on the recruit’s rank during boot camp, E-1 to E-3, they will be paid their base pay accordingly.

For example, in 2021, an E-1 recruit would earn approximately $1,785 per month with less than four months of service.

Their military pay record must be established first and that occurs during in-processing days.

If a recruit arrives at RTC before the 10th of the month, they will get paid on the 15th. From that day forward, service members receive pay every 1st and 15th.

Can you bring your phone to Navy Basic Training?

These items will be returned to you the day before graduation.

Can I smoke or use tobacco / eCigs at Navy Boot Camp?

Similar to the other military branches, smoking or the use of tobacco products are not allowed in boot camp.

To answer the question of whether or not Navy boot camp is hard depends on the physical and mental abilities of the individual.

For example, if you’re suffering from a condition like asthma or flat feet, then some aspects of Navy Boot camp will be difficult.

With that said, if you’re in complete 100% health, then it should be relatively easy.

Personally, this female enjoyed boot camp and every aspect of the training was new and exciting. I anticipated each test by studying incessantly. I made sure to listen and follow orders when instructed.

Overall, if you follow orders, stay motivated and push yourself, then you can achieve any number of obstacles!

What To Bring To Navy Boot Camp 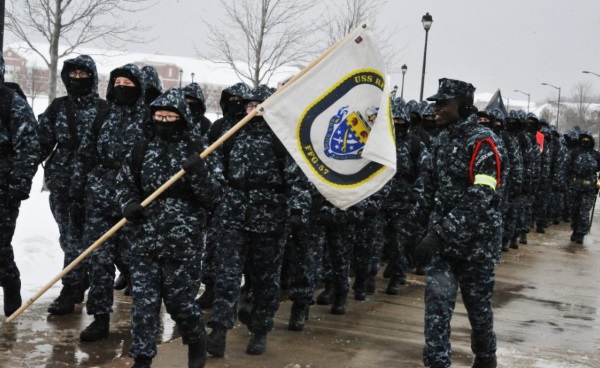 Learn more about Navy boot camp here, including details on every week, and frequently asked questions we get.