When I was thinking about joining up for the Navy SEALs, one thing that always got me super motivated to work out was Navy SEAL Cadences.

At the time, Youtube was around, but nowhere near the type of site it is today.

I literally had to buy a soundtrack on ebay that had a collection of all of the Navy SEAL cadences at the time, and pop it in my portable CD player.

Related Article: How To Check If Someone Was A Navy SEAL

While I never ended up attending Navy SEAL training, or even joining the Navy for that matter, these cadences still to this day get me fired up for a workout.

Below is a list (in alphabetical order), of all of the most popular Navy SEAL cadences, along with their lyrics.

I’ve embedded both the Sound cloud snippet, as well as the lyrics right below it.

I Want To Be A Navy SEAL Lyrics:

when my granny was 91
she did pt just for fun

when my granny was 92
she did pt better than u

when my granny was 93
she did pt better than me

when my granny was 95
she did pt to stay alive

say hey all the way
we run every day

hey all the way
that’s the seal way

How’d Ya Earn Your Livin’ Lyrics:

when i go home
my buddies they will say

oh when i go out
the ladies they will say

and when i go to hell
satan he will say

and when i go home
my mother she will say

How bout’ you?
Fired up

7. We Are The Sons Of UDT – Navy SEAL Running Cadence

We Are The Sons Of UDT lyrics:

Pick up your packs and run with me!
We are the Sons of UDT!

Pick up your steps and run with me!
We are the Sons of UDT!

Get on your planes and follow me!
We are the Sons of UDT!

Get on your boats and follow me!
We are the Sons of UDT!

Get on your ships and follow me!
We are the sons of UDT!

Related Article – Navy SEAL Ranks And Pay: How Much Do SEALS Make Anyway?

low-right-lefty-right
we love to double time

Every where we go
People wanna know

Who we are
Where we come from

Mama hide your children, whenever we’re about hey
People say we’re crazy cause’ the crazy things we do

4. I Don’t Want To Be No Green Beret – Navy SEAL Running Cadence

I Don’t Want To Be No Green Beret lyrics:

Stand up, hook up, shuffle to the door
Jump right out and count to four

I Don’t Know But I’ve Been Told lyrics: 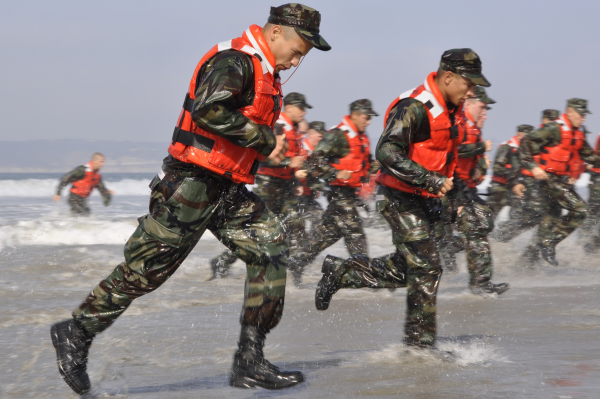 Check out our list of the top Navy SEAL cadences, including How'd Ya Earn Your Livin, Fired Up, We Are The Sons Of UDT, SEAL Team Navy, Everywhere We Go, I Don't Want To Be No Green Beret, and C-130 Rolling Down The Strip.