The U.S. military abides by the Uniform Code of Military Justice (UCMJ).

This is a framework of laws and regulations that applies to and governs members of each branch of the U.S. Armed Forces.

The UCMJ allows for non-judicial punishment (NJP) under Article 15 for lesser offenses among individual service members.

NJP does not require a trial, and therefore can be handled by the offender’s immediate chain of command as an alternative to a court martial.

1. What Is A Non-Judicial Punishment (NJP)?

A non-judicial punishment falls under Article 15 of the UCMJ.

It allows a commanding officer to determine a service member’s innocence or guilt for a minor offense.

If the service member is determined guilty, the commanding officer can administer a punishment “in-house,” without the need for a judicial hearing.

NJP is beneficial for violations of military rules that are not serious enough to require a court martial.

A court martial is a legal trial with a jury that consists of either commissioned officers, warrant officers, or enlisted personnel, depending on the rank of the accused.

As an alternative, a hearing for an Article 15 is a legal proceeding involving the accused’s chain of command without a formal trial and jury.

NJP may go by other names or terms, depending on your branch of service.

However, the procedure for an NJP is similar across military branches.

2. What Happens During An NJP?

Additional Rights Of The Accused

A military service member has rights in addition to those listed above, including:

It’s essential to understand that if the accused is found guilty before a court martial, they risk more severe penalties than NJP.

Ultimately, it is the responsibility of the commander to consider any and all information presented during the NJP hearing.

They must be convinced that misconduct was committed before imposing punishment.

Related Article – Honorable Discharge: 8 Things You Might Not Know

3. Reasons For A Non-Judicial Punishment (NJP)

In this context, a minor offense is defined as misconduct not more serious than what is handled at summary court martial level with maximum punishment of confinement for 30 days.

Examples of offenses considered to be minor are:

As a fit comparison to the civilian sector, an Article 15 hearing is similar to misdemeanor court.

A court martial is comparable to a felony court.

In the case of NJP proceedings, the commanding officer plays the role of judge and jury, which can seem potentially biased or unfair.

However, there is usually sound reasoning for NJP in addition to strict protocol.

Overall, Article 15 is intended to mitigate detrimental effects on a military unit’s cohesion and performance by punishing minor offenses under the UCMJ.

Of course, there are consequences when a service member receives an NJP.

These include potential short and long-term effects on your military as well as civilian careers.

In the short-term, if you accept an Article 15, you must fulfill the punishment determined by your commanding officer.

Here are some potential punishments for NJP offenses:

It’s essential to understand that these punishments are limited to the following:

It is at the discretion of the commanding officer to suspend Article 15 punishments for up to one year.

Therefore, if the accused meets the terms of the suspended sentence, then the punishment is not imposed.

An Article 15 can have potential long-term effects.

Though a commander may not impose a second NJP for the same offense, the service member may be subjected to court martial for the same misconduct.

This NJP can result in administrative discharge along with a negative service characterization.

Therefore, this may be reflected on your DD214 and affect any Veteran’s benefits.

Most Article 15 actions don’t affect a service member’s ability to remain in their military branch.

This is especially the case for first-time or very minor offenses.

However, if your command does not discharge you, NJP can prevent you from re-enlisting or making the next rank.

Ultimately, the potential short and long-term consequences of an Article 15 are far less severe than a guilty verdict by court martial.

Here’s a chart showing the short and long term punishments for all ranks and branches:

5. Examples Of A Non-Judicial Punishment (NJP)

An important point to understand in terms of NJP is that accepting an Article 15 is not an admission of guilt.

Instead, it is an acknowledgement on behalf of the accused that they accept the process and terms of the NJP.

For example, Lt. Col. Lance Smith of the 35th Fighter Wing Judge Advocate General (Air Force) explains the use of Article 15 as a tool for commanders to:

These examples illustrate the intended purpose and potential effects of non-judicial punishment for the commander, service member, and unit as a whole.

How long does an NJP stay on your record?

An Article 15 does become part of a service member’s official file.

The exception is for E-4 and below: after two years (or PCS/ETS) any Article 15 is eliminated from the record.

NJP is equivalent to civil action in that it doesn’t constitute a criminal or federal conviction.

However, it does go on the individual’s service record for E-5 and above unless it is expunged.

Can you still get an honorable discharge with an NJP?

A minor, isolated NJP should not affect a service member receiving an honorable discharge.

However, some members may receive a “General, Under Honorable Conditions” Discharge.

This General Discharge reflects satisfactory service but also an impact of conduct and/or performance issues that have resulted in NJP.

Does an NJP show up on a background check?

Since an NJP is equivalent to a civil action and/or misdemeanor rather than a criminal conviction and/or felony, it should not show up on a background check.

However, there are some reported instances of NJP showing up on federal background checks.

Can an NJP be overturned?

The imposition or results of NJP can be appealed by the accused in writing within five days of ruling.

Appeals are made through the Judge Advocate General’s office to the next senior level officer of the accused’s commanding officer.

Upon consideration, the higher authority may deny the appeal, lower the severity of punishment, or set aside the NJP.

However, the severity of the punishment cannot be increased upon appeal.

The purpose of non-judicial punishment in the U.S. military is to allow for individual service members to receive appropriate disciplinary measures for minor offenses at the discretion of their commanding officer.

Commanders may invoke UCMJ Article 15 as a tool to promote order and discipline within a military unit and avoid trial by court martial for an individual.

More serious offenses would require a court martial with potentially more severe consequences and punishment for the accused.

During the NJP process, the accused is entitled to specific rights and must be notified as such.

NJP can be appealed by following appropriate procedure.

Acceptance of the terms of an Article 15 is not an admission of guilt on the part of the accused.

However, this acceptance results in agreement to fulfill the stipulated punishments within their limits.

There are potential short and long-term consequences due to non-judicial punishment, which can affect a service member’s military and civilian careers. 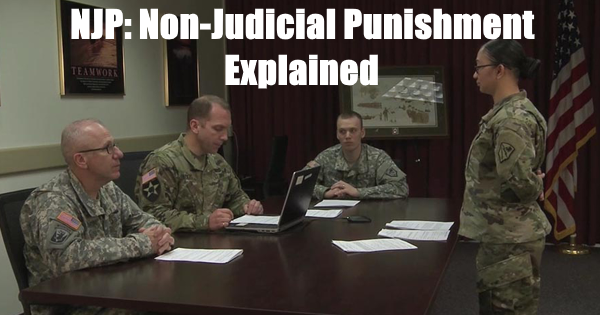 Learn more about what an NJP, or non-judicial punishment, is in the military, including the reasons you would get one, consequences, and a few examples.