Joining the US Army can turn into a rewarding career, with over 100 different job opportunities and retirement benefits that are hard to beat.

But what if you don’t want to go career military? What if you just want to serve for a few years and get out? What careers are available after that?

Whereas there are some common benefits awarded to all of those who serve, the following is a list of the best Army jobs that transfer over to civilian life.

All of these jobs are in demand in 2021, and can turn into a very well-paying career once your time in the service is up.

Becoming an Army Nurse is one of the most intellectually challenging jobs the Army has to offer, and that’s why Advanced Individual Training for 68C’s is a brutal 52 weeks long.

As an Army Nurse, you will have the rare opportunity to engage in your work both mentally and physically.

One day, you might find yourself taking blood at a major fort in the U.S., and the next you might be changing bandages on a small base in the mountains of Afghanistan.

One thing is for sure, you will get very good at calling in 9 line medevacs.

According to the Department of Labor, between the years 2016 and 2026, the need for Nurses is expected grow 15%, much more than the national average. (1)

Related Article: Navy Corpsman – Everything You Wanted To Know

By taking advantage of the Partnership for Youth Success program, you can be set up with an employer immediately after you leave the service.

After a few years in the Army as an Air Traffic Control Operator, you can easily earn over $100,000 without any additional education.

The skills you’ll learn at that time include:

They are the eyes and ears of landing strips and airports.

Although in practice the job is seemingly safe, if a 15Q messes up, the consequences can be disastrous.

Note that the Navy also has its own version of air traffic controllers as well.

About to get out of the Army as an Air Traffic Controller?

All you have to do is lose the uniform. Besides a few tips here and there, the duties performed by civilian Air Traffic Control Operators is virtually the same as the ones performed by those in the military.

Wheeled Vehicle Mechanics make the list because there isn’t a city in America (or the world, for that matter) that doesn’t need a good mechanic.

In addition, while in the service it’s up to the mechanics to keep the troops moving.

Because the Army relies on wheeled vehicles for just about every major mission, Wheeled Vehicle Mechanics are vital to the Army’s success.

Another reason joining the Army as a 91B is a good idea is that the entrance requirements aren’t as daunting as some of the others on this list.

Whereas jobs like Cyber Ops Specialists require a combined entrance exam score of over 200, the combined score required by 91Bs is around 170.

Potential civilian employers for 91Bs include—well—just about any automotive shop out there!

There’s an old saying in the Army that goes like this:

Infantry is on the list as top ten jobs in the Army for civilian life for reasons different than many of the other MOS’s.

After you leave the service, even if you don’t plan on working as a private military contractor, simply having served in the infantry can land you a good job.

Many companies recognize infantrymen as natural leaders and people with go-getter attitudes.

Even further, if a potential employer sees Army Infantry on a resume and he himself was also infantry, there’s going to be an immediate sense of trust and camaraderie.

As far as practical applications go for what you’ll learn in the infantry, the actual civilian options are limited.

As previously mentioned, there’s private military contracting, such as Academi and KBR (among many others).

As an Army Technical Engineer, you’ll gain skills that will lead specifically to leadership roles in the civilian world of construction.

Army Technical Engineers investigate, survey, and draft plans for construction projects, similar to the duties of a construction site foreman or even an architect.

The duties a Technical Engineer performs are more stationary than the actual carpenters, plumbers, and general laborers.

A Technical Engineer will use computer programs to draft blueprints, and even spend time in a lab analyzing materials.

Remember how I said mechanics make the list because they can find work virtually anywhere?

Anywhere there’s construction going on, there’s a demand for the skills a 12T has.

Army Technical Engineers need to be good at math and thinking about the big picture.

If you leave the Army as a 12T, consider getting higher education in architecture, engineering, or furthering your trade skills at a vocational school.

Aside from the fact that CI Agents get a badge, job duties for 35Ls are some of the most stimulating and interesting available in the Army.

Job locations include stateside and overseas assignments, and the duties vary from neutralizing threats to national security to analyzing forensic evidence.

Due to the classified nature of CI Agent’s work, potential Agents must be eligible for Top Secret clearance.

In short, this means no federal arrests, no record of court-martials, and no history of emotional disorders.

Jobs after military service for CI Agents gets really exciting.

If you’re thinking of one day joining the FBI, the CIA, the NSA or similar private industries, counterintelligence agent would be the way to go.

If you’re thinking of pursuing a career in law enforcement after the military, then you definitely want to serve as a Criminal Investigations Special Agent.

(Fun Fact:  Lower than felony-level charges are investigated by the military police)

Because the investigations sometimes lead to charging military personnel, 31D’s act independently from most of the big Army operations.

You should know that there are a few catches to becoming a CID Special Agent:

A few years of service in the military police may be enough to get you a job in law enforcement at the local, county, or state level.

However, with “CID Special Agent” on your resume, it is likely that you can easily land a job in one of the more prestigious law enforcement institutions like the FBI, the Department of Homeland Security, or even the NSA.

Note: The following jobs make the list because they are listed as “In-demand,” and therefore qualify for a special (as in, especially high) enlistment bonus.

In addition to being a mouthful to repeat, Satellite Communication Systems Operator-Maintainers are subject to earn a special enlistment bonus of up to $40,000. (2)

In addition, you’ll easily be set up for a successful career after the military.

25S’s go through 18 weeks of specialized training to learn the ins-and-outs of satellite communication.

Global communication is key to success on the battlefield, and so 25’s have to be confident that they can keep lines of communication up and running at all times.

After leaving the Army, a Satellite Communication Systems Operator-Maintainer can go on to work at a variety of interesting and in-demand job fields.

These include places like airports, telephone companies, and even at police and fire stations.

There are a number of reputable companies that partner with the military looking to hire ex-25S’s, such as T-Mobile, Comcast, and CISCO Systems.

Who figured out the exact house a high-value target is in? That’s Army 35Gs at work.

35G’s have to go through a highly demanding 24-week Advanced Individual Training immediately after Basic training. Once they graduate, the skills they’ll gain will include:

Just as how there’s a high demand for Imagery Analysts in the Army, the civilian and federal service worlds are seeking them, too.

Life after the service as a 35G can lead to a productive career in the private companies like Lockheed Martin, or an exciting career as an analyst at the Central Intelligence Agency.

Furthermore, with software like Google Maps available to every business, top tech companies are always seeking people with the skills that 35G’s have; companies like Apple, Facebook, and Google.

If the Infantry is at the frontline of war on the ground, then Cyber Operations Specialists are the first to fight in the digital world.

In the most exciting times, Cyber Ops Specialists work hard to lead defensive and offensive operations that serve the US military’s cyberspace domain.

However, on a regular day, 17Cs work as the IT guys of the Army.

They are computer experts, maintaining vital firewalls and securing routers in case of security breaches.

It should go without saying that Army Cyber Operations Specialists are set up for competitive, high-paying jobs once they leave the service.

Federal departments such as the FBI, the CIA, the NSA are always looking to hire 17Cs, as well as privately-owned businesses, such as Lockheed Martin and Northrop Grumman Corporation.

So, there you have it. Those are the top 10 Army jobs for civilian life.  While there are many potentially great careers in all branches of the military, these 10 really stand out.

Thinking about your time after the service is actually one of the most important things you should do before deciding on a branch to serve in.

Hopefully, this article will have given you some guidance in that regard.

As a final note, there’s no better guarantee that your life will be successful after the Army than taking advantage of the military’s generous education benefits.

We’ll be posting an article on that soon, so stay tuned! 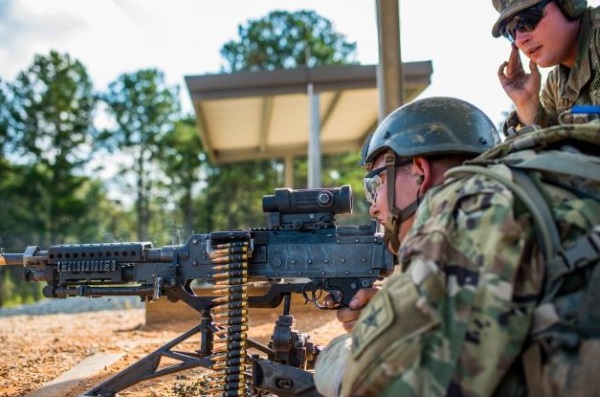 These 10 Army jobs will set you up for a sweet gig upon completion of your service. If you're about to join the Army, consider any one of these jobs.