The USMC wants to ensure that they get the right people to fill its ranks and remove unnecessary barriers that prevent them from joining or being retained.

On October 29, 2021, the commandant of the Marine Corps released Marine Corps Bulletin 1020, which made several significant changes to the current tattoo policy that was published on June 2, 2016.

Over the years, the tattoo policy has changed several times to support mission accomplishment and to maintain the expected military appearance and professionalism of its Marines.

For the first time since 2007, the USMC has completely overhauled its tattoo policy.

Note: This article discusses the new USMC tattoo policy changes for 2021 and 2022 in detail.  With that said, our article here discusses the overall policies and regulations in much more detail.

This includes pictures of examples of what is and what isn’t allowed, and much more.

With the old policy, it allowed Marines to have tattoos on most of their body with several restrictions that were put in place.

It was almost essential to bring the Marine Corps policy with you to a tattoo parlor along with a ruler if you wanted to get an authorized tattoo.

With the new policy, there are fewer restrictions placed on how many tattoos and where you can get them.

The USMC has made significant changes to its tattoo policy with the release of Marine Corps Bulletin 1020.

Below is what stayed the same with the new policy.

Marines or civilians interested in joining the Marine Corps have some exciting changes in the new policy.

Tattoos are authorized on any area of the body except for the head, neck, and hands beside the one ⅜” ring band on the one hand.

Any questionable tattoos will be submitted for review at HQMC.

If it is found not in compliance, further disciplinary actions will take place.

It is essential to know that even though the policy has changed, it is necessary to get all tattoos properly documented following the order.

Failing to get a tattoo documented may affect your ability for retention if the policy changes again.

#4. Do ultra-violet (UV) tattoos fall under the same restrictions as standard tattoos?

Yes. Regardless of whether they can be seen or not with UV lights, all tattoos fall under the same guidance.

#5. Are brands allowed, and do they follow the same rules?

Brands are authorized and follow the same requirements set in the bulletin.

Anything that is against good order and discipline. Extremist tattoos, obscene, sexist, and racist tattoos are not authorized. This would include confederate flag tattoos.

#7. When or how does the Marine verify what tattoos I have?

Your recruiter will submit all your tattoos for review during the enlistment or commission process to ensure it follows the policy. Once in the USMC, tattoos will be verified during height/weight verifications, special duty assignment requests, and retention requests.

If you received your tattoo while it was authorized, your current documented tattoos will be grandfathered, and no negative actions can be taken.

#9. What happens when a person violates the bulletin while in the Marine Corps?

Any violation of this bulletin is punishable under Article 92 of the Uniformed Code of Military Justice. Forced separation from the military, retention denial, and a loss of rank and pay may occur.

All Navy personnel who wear the USMC uniform must comply. All other personnel will follow the Navy tattoo policy here.

No, any tattoo on the face to include inside the mouth is not authorized.

#12. Is there a waiver to join the Marine Corps if I’m outside the policy?

Yes. They have exceptions to policy waivers on a case by case basis. However, it is highly unlikely that it would be approved. Additionally, extremist, obscene, sexist, and racist tattoos would not be considered.

Yes. However, you will be required to wear a crew-neck undershirt while in uniform.

#14. I got an unauthorized tattoo before they changed the policy. Can I still be charged under the UCMJ?

Yes. You could still be punished under Article 92 of the UCMJ if you got an unauthorized tattoo before the policy change.

#15. Is the confederate flag considered offensive according to the Marine Corps?

Yes. The confederate flag is now considered an offensive tattoo.

With the release of Marine Corps Bulletin 1020, there have been significant changes in the current tattoo policy.

One of the most significant changes was the authorization to have full sleeve tattoos up to the wrist bone.

Back in 2007, the USMC banned sleeve tattoos because of operational requirements and military appearance.

Officers and warrant officers now have the same requirements as enlisted Marines.

Previously, if a Marine had over four visible tattoos while applying for warrant officer, they had to sign an agreement not to receive any more tattoos.

Marines need to know that even if a tattoo is authorized, it may prevent them from being assigned specific, highly visible duties.

Over the last two decades, the tattoo policy has changed several times.

If you are interested in getting a sleeve tattoo, you may want to consider getting it now before the policy changes again.

While this policy may change again in the future, one thing for sure is that tattoo parlors around Marine Corps bases are about to get busy.

Commandant of the Marine Corps 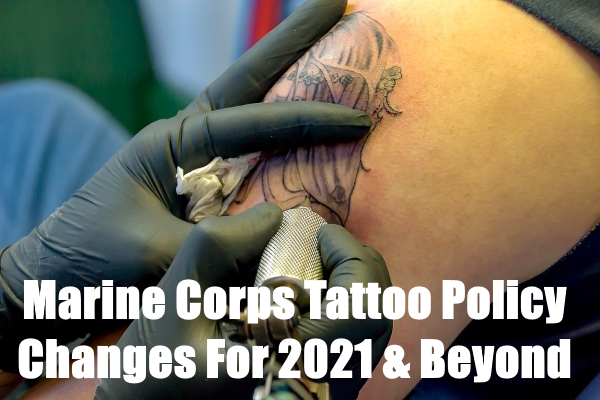 Learn more about the USMC's tattoo policy changes issued in 2021, including the allowance of full sleeve tattoos, and an update to tattoos deemed offensive.