Although they still have an aviation unit, the Navy offers air and sea services to support the Marines. Currently, there are more than 180,000 active Marines around the world ready to execute orders. They have a popular slogan: “The few. The Proud. The Marines.” Through their different bases, they continue to offer faithful service to the nation.

In this post, we will be looking into the different Marine Corps bases in the US. On a side note, if you’re looking at this list as a potential Marine, it’s not an extensive list of where you may be stationed. As a Marine, it’s possible to have a short tour at a Navy base or any other Joint Command base, but for 90% of your career, these are the places that you might find yourself.

Jump To A State

Overall Mission: This serves as a premier training base for Marine pilots. It is where most of the air-to-ground aviation training for Marines is conducted. It supports multiple military squadrons.

Overall Mission: Also known as 29 Palms, Stumps, or TwentynineStumps, this is the largest Marine Corps base in the US. The unit provides services and managing facilities to the operating forces and also ensure promptness of resident commands and tenants in the Combat Center.

Overall Mission: It acts as a training ground for many reserves and active Army, Marine, and Navy units. Several local, stage, and national agencies also use it as a training facility. It hosts I Marine Expeditionary Force.

Overall Mission: It enables operational readiness through infrastructure, logistics, and services in order to support the Marine Corps and other government components.

Overall Mission: This is where male recruits living west of the Mississippi River are trained. Over 21,000 recruits are trained here every year. This base hosts Recruiter School for Marine Corps.

Overall Mission: This base hosts the 3rd Marine Aircraft Wing. It serves as a training ground for new Tomcat crews. It is better known as Navy Fighter Weapons School.

Marine Corps Bases in the District of Columbia

Overall Mission: The Pentagon is the headquarters of the United States Department of Defense where they make the hard decisions needed to protect the security of our country.

Overall Mission: It fosters national collaboration and cooperation among regions in their jurisdiction. It also guards the southern region and promotes security and stability in their area of responsibility to support US security objectives at the national level.

Overall Mission: It offers sustainable and secure training as well as support and facilities to help Operation Forces carry out their mission. It produces readiness and provides support to Operation Forces by launching lethal force when called upon.

Overall Mission: This serves as a tilt-rotor and helicopter base in Jacksonville. It supports and enhances readiness for combat-ready units of the Marine Corps Aviation Combat Element.

Overall Mission: This base acts as a home for combat-ready units preparing for expeditionary deployment. It is home to II Marine Expeditionary Forces.

Overall Mission: This Marine Corps base hosts 2nd Marine Aircraft Wing. It operates and maintains the assigned aircraft. Through the Fleet Assistance Program, this base provides personnel in the fields of passenger and freight transportation.

Overall Mission: This is home to Atlantic Coast fixed Wing. It provides aviation facilities and supports to enhance the combat readiness of Marines and Sailors who are defending the US in the region.

Overall Mission: It acts as a Marines’ recruitment base where qualified young men and women are given rigorous basic training to teach them of Marines’ shared legacy, commitment to core values, and the need to serve the US.

Overall Mission: this is a military installation base of the US Marine Corps. It offers support in technology, construction, and accounting for Marines.

Overall Mission: This base provides services and facilities to the military, tenant commands, and civilian personnel to sustain and promote training readiness.

Where are the Marine Corps bases in the US?

Which is the largest US Marine Corps base?

29Palms in San Bernardino County, California, is the largest Marine Corps base in the U.S. Sometimes called “29Stumps“, it covers over 998 acres of desert, and boasts a total population of over 24,000 residents.

What is a PDS in the Marine Corps?

Aside from Recruit Training, occupational training, and deployments, Marines are assigned to a Permanent Duty Station, or PDS. This may be in the US or abroad.

Where do Marines train?

Marine Corp Recruit Training (Basic) is conducted at either Parris Island, SC, or San Diego, CA, depending on you where you enlist.

How many bases does the Marine Corp have overseas?

How many bases does the Marine Corp have overseas? The Marines have two overseas bases, Camp S.D. Butler and Air Station Iwakuni, both in Japan.

Check out some of our other military base lists below: 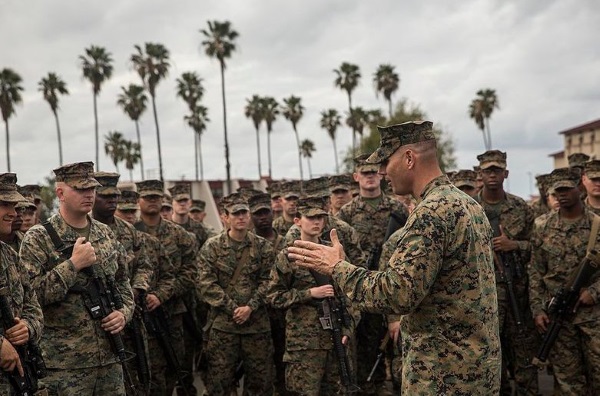 See a list of every Marine Corps base in the US. Includes major installations such as MCAS Yuma, Twentynine Palms, Pendleton, and MCRD San Diego and Parris Island.