As we come across people who work in the public eye, it is common to notice the impact some people have on the world around them.

From that, we often wonder how far-reaching is their influence, so we are curious about their military service.

In some cases, those who served in the military are relatively quiet about it, while others are not.

In other cases, we are confident our favorite actor did serve, and it is a surprise to learn they never had the opportunity.

Jump To An Actor / Celebrity

Was Mr. Rogers in the Military?

It is a long-standing legend that Mr. Rogers served in the U.S Military.

However, this is not true.

Mr. Rogers did sign up for the draft, and he initially had the indication he is fit for service.

However, somewhere along the line, his status changed to indicate he lost his qualification to serve.

It is safe to say that Mr. Rogers did serve his country by dedicating his life to the betterment of children.

Furthermore, the folks at PBS likely feel the same way. In 1969, Mr. Rogers spoke to the Senate Committee to obtain the needed funding to save PBS.

In the end, Mr. Rogers saved PBS and went on to earn numerous awards and a place in the hearts of millions of Americans.

Was John Cena in the Military?

Many people believe John Cena served in the military. However, he did not serve.

John Cena is a WWE star who incorporates a salute and some mannerisms into his attitude. He also is an actor and a television presenter.

He claims he nearly joined the Marines, but he went into wrestling instead.

Also, John Cena often discusses the high level of respect he has for the military, and he works with organizations that support veterans.

Specifically, he works with FitOps, which is an organization that supports veterans.

Was Clint Eastwood in the Military?

Clint Eastwood did serve in the military.

In high school, Clint Eastwood was a swimmer and a basketball player.

As an adult, he received a draft into the Army during the Korean War.

After basic training, he landed a job as a swim instructor and stayed in California for that position because of his swim abilities.

During his time in the service, he met and became friends with several people who became famous actors themselves.

While Clint Eastwood did not experience combat during his time in the military, he did produce a movie called Heartbreak Ridge about a battle in the Korean War revolving around a decorated combat soldier.

Was Drew Carey in the Military?

Drew Carey is a well-known comedian, and host of The Price Is Right. Before becoming a host on the game show, he had his own show and hosted Whose Line Is It Anyway?

Even before then, Drew Carey attended Kent State University, but he failed out of school on two occasions over three years. Drew went ahead and joined the Marines in 1980.

He served in the United States Marine Corps Reserves, and he served for six years.

While in the service, he worked as a field radio operator with the 25th Marine Regiment out of Ohio.

Was John Wayne in the Military?

John Wayne is well-known for playing war heroes in the movies, but the Duke did not serve in the military.

In fact, during World War 2, he had an exemption because he was the sole provider for his family. It becomes controversial because other actors in this same position volunteered instead of taking the deferment.

John Wayne’s lack of service became a source of contention between himself and friends and colleagues.

Despite the drama circling his lack of service, John Wayne advocated for the military by working with the YMCA and the USO.

The Duke toured overseas and worked to build morale for the troops.

Was Gordon Ramsay in the Military?

Gordon Ramsey may run a kitchen like a deranged drill sergeant, but he never served in the military.

However, Gordon’s son, Jack, joined the Royal Marines in 2019.

Gordon supports his son’s military service, and he also supports the troops.

He supports the troops by teaming up with soldiers and highlighting the military life on his shows.

By highlighting troops and military bases on his shows, he brings awareness while he cooks.

Related Article – List of Air Force bases in the US

Was Stan Lee in the Military?

Stan Lee, the beloved comic book creator, writer, and producer, did serve in the military.

After hearing about the attack on Pearl Harbor, Stan Lee opted to enlist in the Army.

He received an assignment to the Signal Corps, and he worked in communications.

During this time, working in communications included repairing telegraph wires.

Eventually, the Army realized Stan Lee is a writer, and they reclassified him as a Playwright.

After serving for three years, Stan Lee created Marvel Comics, and the Army gave him an honorary membership into an Infantry Regiment.

Was Dan Bilzerian in the Military?

Dan Bilzerian is a well-known poker player and actor.

Dan entered Navy SEAL training in 2000, but he did not graduate.

He tried several times to complete the training, successfully making it through the infamous ‘Hell Week’ 2 times.

However, because of violating safety regulations on the shooting range, the Navy dropped him from the program.

That’s the official story, at least.

I’ve actually heard from former Navy SEALs that there was much more too it.

Most notably, it appears that Bilzerian wasn’t looked at favorably by his class.

The instructors were apparently looking for a reason to drop him from the program, and found that reason on the firing range.

Therefore, because Dan Bilzerian joined the Navy but did not complete his training, he never served on active duty and is not a veteran.

However, Dan Bilzerian’s father served in the Vietnam war and received a Bronze Star for his service.

Was Billy Graham in the Military?

Billy Graham was the son of a dairy farmer who went through a profound religious experience as a teenager that led him to minister.

Billy Graham went on to become an evangelist who traveled the world to spread his message.

While he did many things in his life, Billy Graham did not serve in the military.

Billy Graham tried to serve, and in 1944 he was given an extension to gain enough weight to qualify.

While he worked to gain weight to be qualified, he ended up with the mumps and ultimately did not enter the service.

Was Gary Sinise in the Military?

Gary Sinise is a well-known actor who played Lieutenant Dan in Forrest Gump in 1993.

While Gary Sinise never served in the military, his support of the troops is well-documented and impressive.

Gary Sinise has 40 years invested in his career as an actor, and his advocacy for service members is as long.

Sinise works with the Disabled American Veterans organization and speaks for several other disabled veterans’ memorials and organizations.

Furthermore, the Marines named him an Honorary Marine.

While he did not serve in the military, he demonstrates dedication to serving and advocating for troops.

Was Toby Keith in the Military?

Toby Keith is a famous country music star, and even though many believe he served in the military, he did not.

However, Toby Keith’s father served in Vietnam and lost his eye due to an injury.

Toby Keith grew up having a tremendous amount of respect for those who serve.

As a singer, Toby Keith frequently works with the USO to travel and support the troops.

The USO awarded him with the Spirit of the USO Award as a thank you for his dedication.

Also, he is known to take the time to stop and visit with service members at his shows and inviting them backstage.

Was Sylvester Stallone in the Military?

Sylvester Stallone has a long history of playing the military hero in movies.

However, Stallone did not serve in the military.

Stallone did register for the draft, but he was not drafted to service.

Several rumors are floating around as to why, and some speculate the nerve damage to his face is a likely reason his draft number never came up.

Was Steven Seagal in the Military?

Despite playing in movies such as ‘Hard to Kill” and “Under Siege,” Steven Seagal never served in the military.

He grew up rather frail and sick with asthma as a child until he moved to Michigan.

After, he became heavily involved in martial arts and went on to be an instructor before starring in movies.

He is commonly confused as someone who served most likely due to playing military-inspired roles and as a CIA agent.

Was Chuck Norris in the Military?

Chuck Norris can do anything, so it is no surprise to his fans that he served in the military.

He joined as an air policeman, although he wanted to be part of the security police.

While in Korea, Chuck, whose real name is Carlos, earned his nickname ‘Chuck.’

Furthermore, Korea is where Chuck Norris picked up his love for martial arts.

However, his path diverged, and he began to enter martial arts competitions before becoming an actor.

Was ‘The Rock’ (Dwayne Johnson) in the Military?

When you look at The Rock, it is easy to think he was in the military.

However, Dwayne Johnson did not serve.

Dwayne Johnson has a long career in wrestling and as an actor.

Although, despite his lack of service, he does quite a lot to support the troops.

The Rock aligns himself with partnerships that have an ongoing mission to support troops and first responders.

Furthermore, The Rock speaks openly of his admiration for service members, who he refers to as the real superheroes.

Those who are in the spotlight often have their personal lives on display.

In some cases, facts surround the public figure’s military service are true.

Other times, it is a rumor.

However, even if someone did not serve, it does not mean they lack patriotism as many members of the public eye are true advocates to the men and women who wear the uniform. 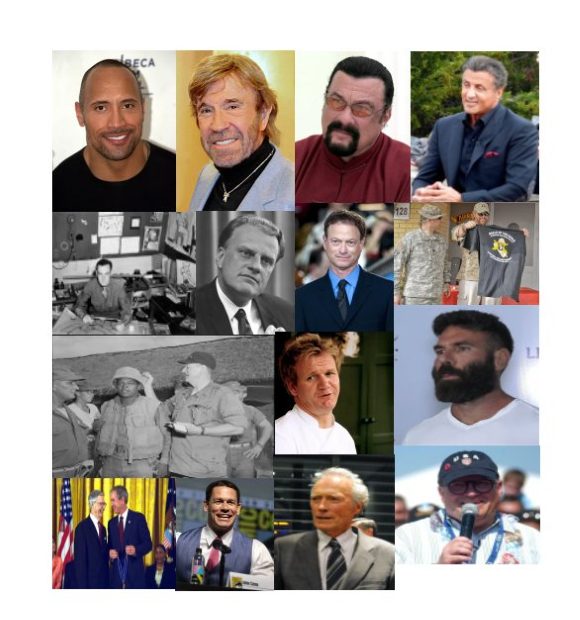 Actors Who Served in the Military

See a list of 15 actors and celebrities who served (and did NOT serve) in the US military. Includes details on famous actors like Clint Eastwood, The Rock, Steven Seagal, Chuck Norris, and more.