The advantages to serving in the U.S. Navy are numerous and include financial incentives.

The Navy Selective Reenlistment Bonus (SRB) rewards sailors to reenlist in a Navy rating (job) that is in high demand.

It is a financial reward that compensates sailors that possess unique skills or acquire special training to perform duties in a Navy rating that is in high demand.

The United States Navy is not much different from civilian careers in that some are in more of a demand than others.

Even better, the U.S. Navy recently updated its SRB plan to include payouts for additional Navy ratings.

Find out which military careers entitle you to the Navy Selective Reenlistment Bonus.

What is the Navy Selective Reenlistment Bonus (SRB)?

Sailors can earn additional pay for a variety of reasons, including serving in a Navy rating that is in high demand.

The military is not much different from the civilian workforce in that some careers are in need of more assistance.

Therefore, the Navy Selective Reenlistment Bonus (SRB) can help you earn extra pay while serving in the military.

The purpose of the pay bonus is to get sailors that reenlist to join Navy ratings that need more help.

Sailors value the SRB program because it not only provides higher pay but also helps you develop critical job skills and experience.

These benchmarks are important to obtain as they reflect on the performance of the U.S. Navy as well as help maintain its impressive scope and size.

Financial payouts for the Navy Selective Reenlistment Bonus depend on different factors.

Furthermore, bonus pay can get adjusted or taken away depending on the reenlistment requirements of the Navy rating.

Lastly, the U.S. Navy can put a cap on the pay bonus due to budget concerns.

The amount you receive from the Navy Selective Reenlistment Bonus (SRB) depends on several factors.

One of the most important is the Navy bonus zone of the sailor.

The bonus zone is nothing more than the amount of time the person has served in the U.S. Navy at the time of reenlistment:

Your monthly base pay amount and Navy rating can also influence the amount of bonus pay.

The number of years you decide to reenlist in the United States Navy also plays an important role.

Yet nothing is more important than tenure in the U.S. Armed Forces which is why sailors that have served longer always earn more.

It is important to make note of your tier as each category has multiple levels and eligibility dates.

Additionally, the Navy does place caps (award ceilings) on bonus pay which means you want to take advantage of the money before another sailor gobbles it up.

Thus, taking an initiative is important if you want to get the well deserved SRB pay bonus.

*NOTE: The Navy nuclear field is no longer listed as a separate SRB tier. It can apply to any tier, but usually is categorized in Tier 1.

Who is Eligible for the SRB?

The Navy Selective Reenlistment Bonus (SRB) is only available for select Navy ratings (jobs) that are in need of more help.

The good news is that the U.S. Navy recently expanded to include 78 new ratings for 2021.

As a result, most of the Navy ratings for 2021 qualify for the SRB program due to an enhanced need for returning service members.

The U.S. Navy provides the SRB bonus to active duty or full-time support (FTS) that agree to reenlist in Navy ratings that are currently experiencing a shortage.

In addition to offering the SRB bonus to far more Navy ratings, the military branch also upped the ante.

Indeed, select Navy pay bonuses for reenlistment could get you up to an additional $100,000.

However, other ratings have received a decrease in bonus pay (and 44 ratings have been eliminated from the SRB program).

Nonetheless, the 2021 updates are good news for most service members (new and returning).

Furthermore, the changes in the reenlistment bonus amount will not impact base pay for sailors, which remains unchanged for all 107 ratings.

The United States Navy estimates that changes to its SRB program will enable an additional 5,200 sailors to qualify for higher pay.

Once again, bonus pay is contingent on several factors including years of service and Navy rating.

Lastly, Navy pay bonuses are subject to change without notice so keep in mind that these updates are not permanent.

Speaking with a local Navy recruiter can provide you with more information regarding pay bonuses that are currently available.

When do I receive the SRB bonus?

There are various stipulations to the Navy Selective Reenlistment Bonus (SRB).

In general, sailors can expect to earn half of their Navy Selective Reenlistment Bonus immediately upon renewing a service contract.

Meanwhile, the second half of the award amount is paid out in a series of evenly distributed payments.

Sailors are locked into the bonus pay amount that is agreed upon in the contract yet these terms are always subject to change.

Thus, if you are seriously considering reenlisting in the U.S. Navy, now is a great time to take advantage of some excellent financial incentives.

The purpose of the Navy Selective Reenlistment Bonus program is to relocate sailors to areas of critical need.

Consequently, the Navy ratings and expectations of the SRB plan are constantly adapting to fulfill the latest needs of the military branch.

The Navy reenlistment zone is one of the most important factors in determining a payout amount.

For this reason, sailors that fall in Zone B or Zone C should seriously consider reenlisting in a Navy rating that can earn them close to six figures in bonus pay.

Moreover, the United States Navy announced in 2020 that sailors can now reenlist up to a year ahead of the end of their service date.

The expanded window of time has reportedly opened the door for approximately 10,000 sailors to qualify for the SRB program that were previously denied.

As a result, we recommend speaking with administrative if the end of your service is approaching a year in order to capitalize on new Navy pay bonuses.

What other Navy bonuses are available?

The United States Navy has released its planned budget for 2021.

According to the data, the U.S. Navy will dedicate nearly $380 million to reenlistment bonuses for the coming year.

The number is slightly down from 2020 ($382.7 million) yet still noteworthy since the Navy expanded the reenlistment bonus to include several more ratings.

Therefore, you should first take advantage of the Navy Selective Reenlistment Bonus if your end-of-service date (EAOS).

It is possible to have multiple Navy Enlisted Classifications (NECs) that qualify for the SRB program.

There are several other Navy pay bonuses that you may qualify for even if your service contract is not set to expire in the next year.

The Navy SRB program is dedicated to filling ratings (Navy jobs) that are in need and currently experiencing shortages.

Consequently, the Navy ratings and payout amounts are frequently changing to reflect the greatest needs within the military branch.

Notwithstanding, the Navy Selective Reenlistment Bonus could earn you some serious extra coin for deciding to reenlist in a position of need.

Sailors receive half of the bonus payout immediately upon signing a new service contract.

Meanwhile, the second half of the Navy SRB bonus is paid out evenly through monthly installments.

Sailors receive their funds via direct deposit and can assist with living costs or family expenses. 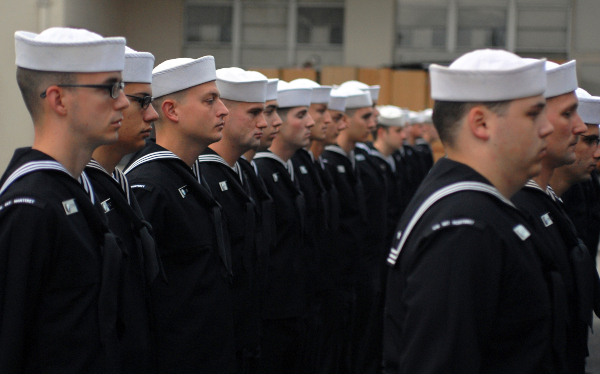 Learn more about the Navy Selective Reenlistment Bonus, or SRB, including the different zones, pay tiers, eligibility, and more.