When you leave the military, you will probably wonder what to do with old military uniforms.

While there are rules and regulations surrounding what uniforms need returning to the supply clerk, what is alright to donate, and what to do with insignias, there is not much oversite.

However, there are some ‘best-practices for handling extra old military uniforms.

What The Regulations Say About Old Military Uniforms

Uniforms are technically government property, but soldiers often buy their own extra uniforms with their own money.

However, the government gives a uniform allowance for uniforms and will swap put uniforms for fresh ones when needed.

When you look at equipment and uniforms, generally, anything worn on the outside is non-retainable.

Items that have direct contact with the skin, however, are retainable. Meaning you can keep them.

However, this process varies by military branch, so it is vital to ask your chain of command as you begin the process of leaving the military.

When you leave the Armed Forces, the supply clerk might ask for some equipment back, and they might even ask for uniforms.

Some service members opt to destroy uniforms after leaving the service.

While there is not much oversite determining what is done with old military uniforms, the disposal or destruction is technically not authorized.

However, throwing them away or destroying old military uniforms is still common.

This prevents them from being used for stolen valor purposes, which we discuss in detail below.

How to Dispose of Old Military Uniforms Properly

Unlike the flag, there isn’t really any improper way to dispose of old military uniforms.

It’s not uncommon to simply throw the uniform away in the trash bin, as it’s not recognized as being improper.

In addition, you can simply burn the uniform. Again, it’s not considered against etiquette in doing so.

Some service members choose to go this route in order to prevent their old military uniform to be used for stolen valor purposes.

Ideally, upon leaving the military, you have the space to keep one uniform.

However, having one uniform is ideal for special occasions post-military life, especially for welcome home parties or even funerals.

However, three months is the typical rule for wearing your uniform after your honorable discharge.

If you received a dishonorable discharge, you are not to wear your uniform at all.

If you retired from the military, you could wear your uniform whenever you wish as long as it reflects the grade/rank you were at retirement.

If you are wondering what to do with old military uniforms and opt to donate some or all of them, remove your patches and insignia first.

Many discharged service members donate their uniforms to military thrift stores or shops that benefit veterans.

If you live near a military base, call and find out if they do disaster training for the medics.

The training for medics involves fake blood and having to cut up uniforms to practice trauma care. No one wants to lose a fresh pair of BDUs in that situation.

Also, consider reaching out to your local ROTC or JROTC program to see if they need donated uniforms.

Your local recruiter is a great place to find out where to donate uniforms locally.

In many cases, they’ll actually take your old military uniform.  Here’s how to get in touch with them:

What To Do With Old Badges, Medals, and Ribbons

The Department of Defense tends to leave a lot up to individual military branches.

However, the Department of Defense does not authorize medals to be donated or transferred to anyone else.

You can return these items when you have a change of duty status. Otherwise, you might consider keeping them.

In fact, if you earned them, keep them!

You might want to consider putting them in a shadowbox and hanging it on your wall.

There is some controversy surrounding the idea of selling old uniforms.

Stolen valor is a term used to describe those who lie about serving in the military, or greatly embellish what they did.

For example, someone could claim that they were special forces, when in reality they were simply a cook.

With that said, some argue that you lower the risk of someone impersonating your rank if you remove your insignia and patches from your old military uniforms.

Really the only way to keep someone from using your old military uniform from being used for stolen valor purposes is to either:

The Department of Defense expects those who leave the military to remain vigilant to avoid unauthorized use of old uniforms.

While regulations surrounding what to do with old military uniforms are not largely enforced, you have good options.

There are reasons to keep one or some of your old uniforms.

However, if you decide to donate your uniforms, remove the patches and insignia first.

Also, consider donating uniforms to an on-base thrift store or to an organization that supports veterans.

Also, you might contact your local base to see if there are training programs that need extra uniforms. Your local J/ROTC programs and your local recruiter likely have ideas, as well.

How To Donate Your Care to a Veteran 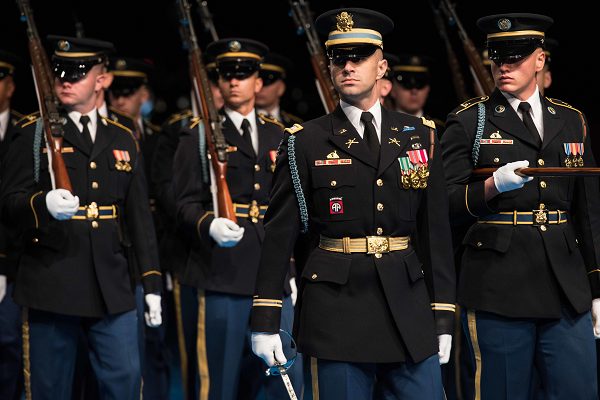