Recruiters are usually the first interaction you receive when joining a branch of the Armed Services.

They are the ultimate salesperson and have all the influence to steer you in the direction that fits them best.

Everyone has heard a, “but my recruiter told me this” story.

Most recruiters are not bad, but they have quotas to meet and that pressure can lead to bending the truth or outright lying.

Bottom line- do your research, read your contract and don’t fall for the 12 military recruiter lies below.

Related Article – Do Army Recruiters Get A Commission To Sign You Up?

1. You can’t choose your MOS

This is one of the biggest lies told by military recruiters in all branches and it’s complete B.S.

You can 100% choose your rate, MOS, or AFSC, but of course you need the ASVAB and other test scores to qualify.

Don’t let them talk you into something you might regret down the road!

2. There’s no signing Bonus for that.

This is a lie that recruiters might tell you to get you to sign up for a different job.

Do your own research!

There are signing bonuses for specific jobs, shipping timelines and more.

3. Yeah, you will definitely learn skills for a great career in the civilian world!

This is a lie that recruiters tell you to get you to sign into an open or high demand field.

While there are some jobs that provide you with skills you need to have a great civilian career, some jobs do not have an equivalent at all.

This is something to consider when you do not plan to spend 20 year in the Military.

Related Article – 3 Steps For Visiting An Army Recruiter Near You

4. Yeah, you can become a Navy SEAL if you’re in the Marines.

This lie is pretty popular and is almost the same as saying you can become an Air Force pilot if you’re an Army driver.

First, you need to be in the Navy to be a Navy Seal.

5. You can quit anytime you want to, with no legal recourse.

This is a complete lie, but thankfully, one not told very often.

You cannot quit the Military at any point without legal recourse.

When you make a commitment to join the Military you sign a contract.

Once you attend Basic Training your contract begins.

Even prior to going to Basic Training you make a commitment.

It is easier to leave prior to shipping to Basic Training, but you can still be held accountable (although it rarely happens).

There are ways to leave the Military, but all will come with some sort of legal recourse such as receiving a Dishonorable Discharge.

This is not something you want following you down the road.

6. Just sign up for this MOS/Rate/AFSC and you can train for a similar job or switch later.

This is a lie that recruiters tell you to sign you up for a different job other than the one you’re requesting.

They may tell you that signing up for a certain specialty in the same field that you would like to work in will allow you to cross-train.

While some job functions may overlap-don’t depend on it!

They may also tell you that you can just switch later.

It is possible to switch, but it is not as easy as it sounds and it does not happen often.

There are many stipulations, required signatures and position availability requirements.

If the job you have your heart set on is not open, come back later.

7. You do not need to get Airborne in your contract.

Don’t let a recruiter promise you something later that you might not be able to do.

You can sign up for Airborne later, but it is not easy to get into.

If you would like to sign up for Airborne, do it during recruiting and make sure it is in your contract.

8. Don’t worry about getting that in writing.

This lie is along the same lines as the one above.

If a recruiter promises you something and it is not in your contract/in writing, do not be surprised when it does not happen.

Anything that is promised to you during the recruiting process, make sure it is in writing.

This is a lie, everyone is eligible to deploy.

Some recruiters might tell you that if you sign up for a certain job, or certain branch (Air Force is common) that you will not have to deploy.

Regardless of your job or branch, you are still eligible to deploy.

Some branches or positions may deploy more often than others, or have a higher chance of seeing combat, but everyone is still eligible.

If you are unwilling to deploy, the Military may not be for you.

10. If that medical issue doesn’t bother you any more then do not put it down.

This lie might not hurt the recruiter in the long run, but it could hurt you.

The recruiter might tell you not to put a potentially disqualification medical issue down to assist with meeting their quota.

Medical screening is there for a reason.

All Military branches have high-impact physical requirements and that old injury could become a larger issue.

11. Go open contract and you can choose any job you want later

Yes going open contract, such as Navy Fireman, will allow you to “strike” for a few different ratings such as Engineman (EN), Machinist Mate (MM) or Damage Controlman (DC), but it does not guarantee you will get the rating you want.

There must be availability for that rating when it comes time to strike.

You can attempt to get a rating in a different unit, but it can be very difficult.

You also might not meet the qualifications for that specific rating that you are striking for.

Do your research and go in with the idea that it may not work out exactly how you intend it to.

Sure, some might get free housing, healthcare and food, but not everyone and it is not as glorious as it may seem.

If you are single, your “free” housing is likely in the barracks.

Some higher ranking or married members will get Basic Allowance for Housing (BAH) but that is calculated based on several variables such as marital status, rank, dependents and location.

Tricare insurance is great, but it comes with stipulations.

It may be free for some, but your marital status and dependent information will effect this.

Not only that, it comes with stipulations such as costs being covered in on-base facilities.

These facilities are often very busy and appointment availability is limited, so if your need is immediate, you will be visiting a facility off of the base.

Yes, you will receive meals for yourself but it is not meals of your choice.

You will be allowed to go to the chow hall and eat whatever meal item is being served.

Housing, Healthcare and Food are great perks, but they are not completely free, or as elaborate as they may seem.

While the lies military recruiters tell might seem harmless, they can have a serious detriment to your overall experience of serving.

You want to serve your country, but at the same time, want to set yourself up for future skill-sets that can translate to the real world.

As mentioned previously (over and over because it’s that important), do your research!

It can save you a ton of headaches, and potentially even keep you from scrubbing toilets for the next 4 years of your life. 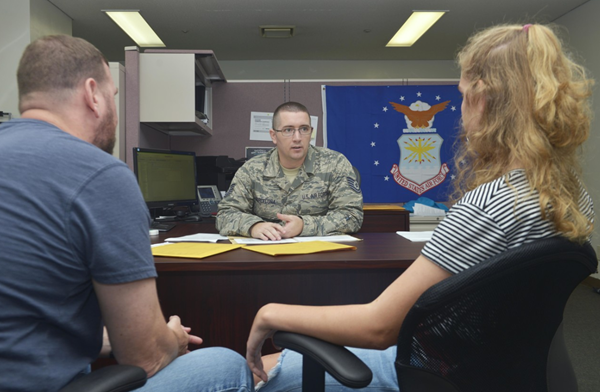 See the most common lies military recruiters tell to get you to sign up. Includes switching your MOS later, signing bonuses, and more.