The Army and Air Force are both important components of the United States Military.

The Army is the oldest fighting force, while the Air Force is the newest.

Both the Army and the Air Force support the United States in offensive and defensive air and ground operations.

While they both fall under the Department of Defense and Title 10 operations, there are several differences.

Continue reading for five Army Vs. Air Force differences and details on both entities.

What is the US Army?

The Army is a Department of Defense Military branch that protects the United States, its citizens, and its interests.

It was founded in 1775 and has been one of the main fighting forces since that time.

The Army is comprised of a diverse group of individuals in roles such as civil affairs, doctors, lawyers, pilots, infantry, and many more.

The Army has active, reserve and guard units that all work together to support the US around the world.

How big is the US Army?

Of this number 483,941 were in active duty, including cadets.

81% of the active duty Army are enlisted members, while 16% are Officers.

The Army holds over 150 MOS positions with capabilities in air, water and ground support.

What does the US Army do?

The Army supports operations around the world.

The Army has multiple tanks and fighting vehicles to provide offensive and defensive attacks, as well as patrols and protection.

They will support air operations with helicopters and unmanned aerial vehicles.

Army personnel also run special missions and have elite groups such as the Rangers and Special Forces.

The Army is responsible for completing Title 10 duties.

This means that they enact on any requests that matches the National Defense Strategy.

They are to be readily deployable, able to fight and win in any conflict situation.

According to the Army’s mission, Army personnel are responsible for providing prompt and sustained land dominance by defeating ground forces and controlling adversary land, resources and populations.

What is the Army’s Command structure?

The largest command structure is called a Field Army and it can hold over 90,000 soldiers.

The smallest unit is called a fire team with four soldiers. 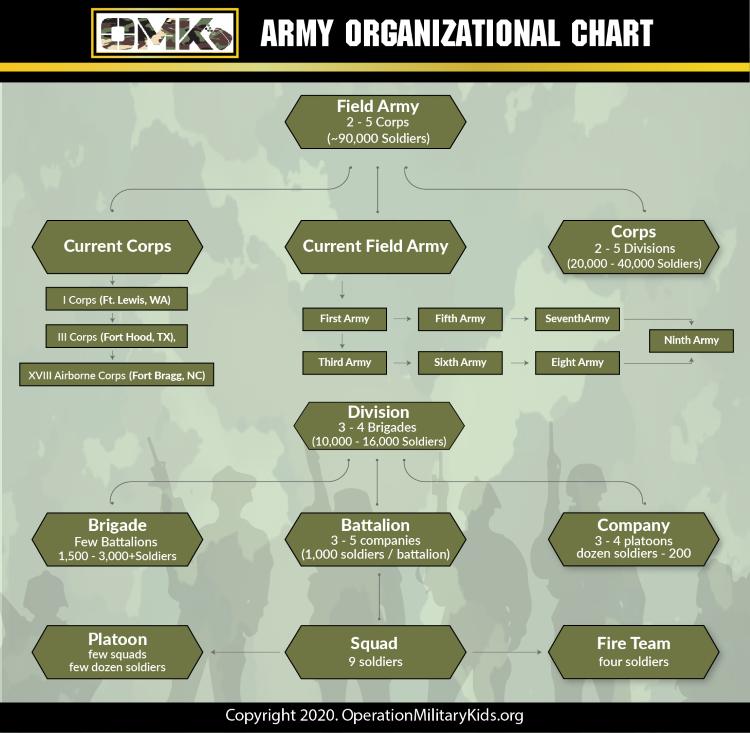 Each unit is comprised of smaller unit components.

Each unit is commanded by a person of a different rank.

What is the Air Force?

The Air Force is a Military Branch under the Department of Defense.

It is capable of air, space and cyberspace attack capabilities.

The Air Force consists of active, reserve and guard units.

This branch is constantly working towards technological advances that allow them to fly faster, reach further and be prepared in any of their primary focus areas.

How big is the Air Force?

These figures do not include the Guard, Reserve or members in the Air Force Academy.

What does the Air Force do?

The US Air Force currently has the largest Air Force in the World.

The Air Force provides protection for the United States on the ground, in the air, and above the sky.

Their mission is to, “Fly, fight and win in air, space and cyberspace.”

Advancements in Air Force technology have led to the ability to fly faster than the speed of sound, reach areas previously untouchable with robotics and guide precision weapons with the largest GPS constellation in history.

Advanced technology allows for the USAF to provide intelligence, surveillance, and reconnaissance (ISR) missions to protect US assets around the world.

They can create strikes, counter strikes and track strikes on land and in air.

The Air Force is responsible for protecting the skies, space, and cyberspace.

They use over 30 satellites to coordinate and protect the United States.

The National Defense Authorization Act for the Fiscal Year 2020 approved a Space Force to be held under the Air Force.

What is the Air Force’s Command structure?

The Air Force has a similar structure to the Army.

In between the two, you will find squadrons, flights, and groups.

All ranging from over a dozen to a few thousand.

The Air Force falls under the President and Secretary of Defense.

It consists of Military Departments and Unified Commands.

Both the Army and the Air Force have aircraft and support ground operations.

They also both battle targets through cyberspace.

However, their main responsibilities differ.

They do support cyber security, but that is one of the main functions of the Air Force.

The main responsibility of the Air Force is air, space, and cyberspace.

The Air Force does have ground operations, but the duties of their ground operators include mechanic, medical, policing and other support roles.

Another major responsibility that the Army does not have is space operations.

The Air Force runs a large network of satellites and is expanding its space program.

Both Army and Air Force individuals can deploy.

Specific jobs, the needs of the specific branch, as well as many other factors can have an impact on who will deploy.

This is due to a number of factors including how they support operations and the ability of the Air Force to change out units as a while.

Deployment length is not the only difference in deployments, locations also vary.

Army members are more likely to be deployed directly to combat areas (over 80% of deployed troops), while just over 40% of Air Force members were staged directly in combat areas.

Air Force members were more likely to be staged in strategic locations outside of the combat area or other known locations.

Both the Air Force and Army fall under the Department of Defense, but their missions differ in strategy.

The Army has a mission to, “…deploy, fight and win” by providing a prompt and sustained land force.

The Army has a mission that focuses on combat and being tactical.

The Air Force’s mission is to, “…fly fight and win in air, space, and cyberspace.”

This mission includes being superior to other Air Forces and being technically advanced.

The Army currently has five types of helicopters:

They have a C-12 Huron fixed-wing aircraft as well as the unmanned aerial vehicles MQ-1 Gray Eagle and RQ-7 Shadow 200.

The Air Force has dozens of aircraft types.

These types include helicopters, fixed-wing, and unmanned aerial vehicles as well.

The complexity and range of aircraft types has also resulted in Air Force pilot training to be lengthier than Army pilot training.

The type of positions in the Army and Air Force differ, as well as the number.

Currently, the Army has over 150 different MOSs.

These positions are broken into branches and fields.

The Army has one of the more diverse career field opportunities out of any Military branch.

The Air Force has just over 130 positions in nine different areas.

The majority of positions involve aircraft either piloting or maintenance.

Because the Air Force is smaller in size, has less available positions, and higher entry testing requirements, it is also generally harder to get into.

This may change as the Space Force is developed.

The Army and Air Force both support the United States at home and abroad.

While they may vary in overall size, there are several other differences.

Above we covered what the Army and Air Force is, their size, what their responsibilities are, and what they do.

We also discussed the differences in responsibilities, deployments, missions, aircraft, and positions.

Regardless of their differences, both are vital to the success of United States defense.

What is the difference between the Air Force and the Army?

The most significant difference between the Air Force and the Army is their respective areas of responsibility. The Army is land-based and is a ground fighting force. The Air Force seeks to retain air superiority and conduct aerial warfare.

Does the Army or Air Force pay more?

All branches of the U.S. military pay according to rank and time in service. However, promotions in the Army can sometimes be faster than the USAF, which leads to increased pay.

Lasting 10 weeks of rigorous physical training and challenging warfare drill, Army BCT can be easily said to be harder than Air Force Basic. USAF basic training increased basic training from 6 to 8 weeks in 2008.

Is the Air Force part of Army?

Historically, the Air Force was established as the Army Air Forces but was organized as a separate branch of the U.S. military as part of the National Security Act of 1947.

Which is easier to get into, the Air Force or the Army?

With more openings and less stringent requirements, it’s easier to enlist in the Army than the Air Force. The Army minimum ASVAB score is 31, and you will need to score a 36 to join the Air Force.