The military separates Veterans into 4 different types for a reason.

The type of Veteran determines eligibility for military benefits along with other special recognition.

Moreover, the type of status depends on several factors including length of service and roles in combat (if applicable).

Additionally, the status of a Veteran is influenced by what type of discharge they received.

Therefore, it’s crucial to be aware of the 4 types of status for Veterans:

Sadly, many Veterans are surprised to find a reluctant hiring force and other issues adjusting back to civilian life.

Unfortunately, there are many negative stereotypes and assumptions made about military vets.

For this reason, it’s important to bridge the gap between civilians and Veterans to avoid misconceptions.

The official definition of a military veteran, according to 38 U.S. Code – 101 is:

A person who has served in the naval, air, or space military service and was released or discharged honorably.

In general, the military categories Veterans into 4 types depending on several factors:

Those that depart from the U.S. Armed Forces under honorable circumstances traditionally receive better benefits and recognition.

Nonetheless, that is not to suggest that everyone who served in the military (even dishonorable discharge) deserve some type of designation as a U.S. Veteran.

Veterans are eligible for special benefits, recognition, and military discounts.

Accordingly, it’s important to know which type of Veteran you represent.

The military separates Veterans based on type of service.

In general, active duty refers to full-time personnel in the U.S. Armed Forces, including:

Meanwhile, inactive duty is classified as a role that is not full-time.

Additionally, it may include special “extra” duties as well as training outside of active duty for the Armed Forces and Reserve Corps.

There are a few essentials that determine the status of a Veteran.

In general, the military reviews the type of service along with duration in the military.

Furthermore, Veterans Affairs (VA) may consider other factors such as personal conduct and character, circumstances of your role in the military, and type of discharge.

Here are the most relevant to determining what type of Veteran you are:

The U.S. Armed Forces has both active, full-time roles along with reserve and part-time assignments.

In general, those that served in any branch of the U.S. Armed Forces is considered active duty / full-time service.

Meanwhile, the process gets a little more complicated for members of the U.S. National Guard and Reserves.

Accordingly, they may or may not earn the status of a Veteran depending on the role served in the branch.

Despite it, all members of the National Guard and Reserve receive Veteran status for serving longer than 20 years.

Finally, any member of a reserve component that has a disability or injury linked to training may earn additional benefits.

The length of time you serve in the military also matters.

Fortunately, for most active duty military personnel, this is not an issue.

The minimum requirements range from 30-90 continuous days for certain types of Veterans.

On the other hand, those that are discharged honorably may have to serve 2 years or more to achieve the same status.

It’s worthwhile to last 90 days for the benefits associated with the Post 9/11 GI Bill.

Meanwhile, those that make it 2 years also receive additional benefits from the Montgomery GI Bill.

It’s important not to confuse your time of service in the military with duration of service.

The duration reflects to how long you served while time of service is more reflective of the type of role and performance.

For example, the time of service may refer to when a person was in service during peacetime.

Then, it can also account for the amount of time in service during wartime efforts.

The only exception is if the service member sustained an injury or disability that prevented them from meeting the minimum requirements.

Purple Heart recipients are also exempt from any guidelines regarding time of service.

Lastly, the military grants an exception to those that passed away because of service, regardless of type of service.

The majority of U.S. Veterans are administratively, or honorably discharged.

In other words, the service member fulfills the obligations of a service contract.

Thus, the Veteran receives a honorable discharge from the U.S. Armed Forces.

For starters, these types of Veterans may inherit health insurance and other VA benefits.

There are 2 different distinctions for service members that are administratively discharged:

Of course, dishonorable discharge is a type of eye sore in an otherwise noteworthy military career.

The U.S. Armed Forces enforces law and order, just like any type of society.

Consequently, there are repercussions to violating military law.

For this reason, the military has the power to terminate service prior to the end of a service contract.

If the service member is found guilty of the infractions, one punishment is the status of dishonorable discharge.

Additionally, the status is public to potential employers that may feel hesitant moving forward with the hire.

There is more than 1 type of Veteran despite the misconception.

Accordingly, spreading awareness narrows the gap in misunderstanding between civilians and military Vets.

It’s useful to know which type of Veteran you are to see if you qualify for special benefits.

War Veterans are classified as active duty or reserve members of the military that have been in an area of conflict.

The area of conflict may take place on land or over surrounding waters to support activities against a national enemy.

Generally, these military personnel spend time on foreign soil where they may be stationed for years.

However, it doesn’t just include those in combat roles as many other military specialties apply.

For example, mechanics and nurses often serve behind enemy lines where a serious threat exists.

The second type are Combat Veterans.

Combat Veterans are active duty or reserve service members that have encountered any degree of combat for a length of time.

In general, this also occurs on foreign soil yet is open to any situation involving conflict.

Combat Veterans receive the acknowledge whether on an offensive, defensive, or friendly-fire situation.

These types of Veterans, like War Veterans, are entitled to additional benefits from the VA.

Retired Veterans are any military personnel that have served 20 or more years.

The length of time must come in an active duty or reserve position.

Furthermore, the type of Veteran is often expanded to include those that are “medically retired” because of injuries sustained during service.

Medically Retired Veterans do not need to exceed the 20 years of service requirement.

Therefore, it’s one of the more desirable of the 4 types of Veterans classifications.

Military retirees are eligible for the full package of benefits.

Furthermore, these privileges expand to military bases for medical and commissary needs.

Those that make a career out of the military also earn a pension, another noteworthy reward.

In general, Retired Veterans have a huge advantage in the civilian world when applying for new jobs.

When you think about it, the Veteran has spent the last 20 years or more focusing on a specialty in the military.

Accordingly, the training and experience can translate into a rewarding civilian career, as well.

The U.S. Armed Forces looks out for those injured in the line of duty.

Thus, any soldier that is permanently disabled or requires an extensive time to recover, qualifies for the status of a Protected Veteran.

Veterans under this type of designation are entitled to exclusive benefits.

Additionally, there is the possibility of receiving a pension for the rest of your life.

More importantly, Protected Veterans are safeguarded from discrimination, including in the workplace.

Disabled Veterans generally receive ratings that are labeled in the form of percentages.

The higher the rating translates into the more the Veteran is qualified to receive in terms of benefits.

As a result, disabled Vets may claim a comprehensive benefits package that ranges from 10 – 100%.

Lastly, the injuries doesn’t always have to be sustained during active-duty to qualify for disability benefits.

There are 4 types of veterans.

The status of a veteran is categorized to determine benefits and other special privileges.

In general, the U.S. Armed Forces recognizes military service even for those that were dishonorably discharged.

Thus, if you ever served the military under any capacity, you are deserving of special recognition.

Military veterans are entitled to certain government benefits as well as discounts on flights, car rentals, food, and apparel. 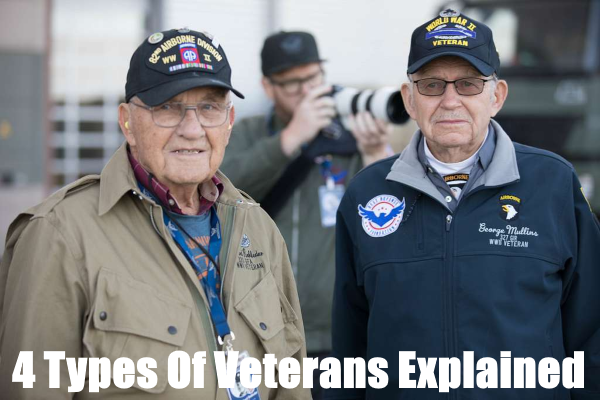 Who Is A Veteran

The 4 types of Veterans are determined by years of service, discharge status, and other factors. Learn about eligible benefits here.