Military acronyms are funny whether intentional or not.

The U.S. Armed Forces narrows down common phrases and titles to save time.

Often, when you are in combat, information needs to get exchanged quickly which contributed to the rise in acronyms.

Today, there are hundreds of military acronyms, some of them quite hilarious.

The U.S. military loves to title anything with an acronym.

While it’s a logical process to shorten the amount of time information needs to get communicated, acronyms are often funny.

The silly letters come together to form an acronym that is even more ridiculous or hilarious than its original intention.

FARP is a military acronym short for “Forward Arming and Refueling Point”.

However, over the years it has transformed into a walking punchline for troops.

FARP is actually a small aviation unit stationed on the front line that assist pilots with military operations.

While they carry out a really important objective, FARP is also the source of many jokes.

In the military, PMS stands for “Professor of Military Science”.

In the real world, well, we all know what “PMS” represents without getting into too much descriptive detail.

Consequently, every Professor of Military Science is accustomed to giggles and chuckles when they announce their acronym to classrooms.

It only proves that never students never become fully mature, regardless of age.

Speaking of immaturity, it doesn’t get more absurd than MANCOC.

The funny military acronym is the condensed version of Maneuver Advanced NCO Course.

The Army non-commissioned officer was the brunt of so many jokes that the military branch eventually changed the title to “Senior Leader Course.”

Regardless, some members of the Army still jokingly refer to it as MANCOC.

While it may sound like a lesson in sex ed, MANPADS is actually a part of the military ensemble.

The portable surface-to-air missiles are effective at taking out low flying enemy aircraft.

As a result, Man-Portable Air-Defense Systems are totally necessary even if soldiers give each other a hard time for carrying them.

Just remember, there is no shame in carrying a diaper if it keeps you protected from enemy aircraft.

MANPADS is not the only sexual innuendo that has infiltrated military acronyms.

There are many others like the infamous DICC, short for “Defense Intelligence Collection Cell”.

During the Bush administration, DICC was commonly cited next to memes of Dick Cheney.

It’s among the most funny military acronyms for troops needing a boost in morale.

Related Article – What Is A POG In The Military? And 5 Other Military Terms

FAP is perhaps the dirtiest of all the military acronyms.

However, when it was originally conceived in the military the acronym meant nothing more than “Family Advocacy Program”.

Family Advocacy Program (FAP) is integral to assisting service members and their families with the challenges that come with service.

Accordingly, they deal with some pretty serious topics such as domestic violence, child abuse, and neglect.

Unfortunately, the organization also suffers from having the same abbreviation as a popular smut reference.

SNAFU is one of many popular military abbreviations that are short for a phrase.

These types of military acronyms are also wildly funny.

For example, SNAFU is generally interrupted to mean “situation normal all fouled up.”

Meanwhile, while the message behind FUBAR is far from funny, it does sound a little goofy.

Then, there are the types of military acronyms that make absolutely no sense.

For example, did you know there is actually a military acronym “PPPPPPP” (infamously known as the 7 P’s)?

ASRAAM ranks among funny military acronyms for no other reason than it’s impossible to say the phrase 3x without cracking a smile.

How else can you explain another country just got ASRAAM’d by the United States?

In all seriousness, the Advanced Short Range Air-to-Air Missile is extremely impressive.

The high-speed, heat-seeking missile is mostly used in air-to-air combat by British and Australian Air Forces.

In fact, the United Kingdom successfully launched an ASRAAM attack in 2021 against the Islamic State in southern Syria.

CATS is one of many funny military acronyms related to the animal kingdom.

And, if that is not enough of a mouthful, consider the Navy SEALs has been used for so long that most people forget its an acronym.

Related Article – Here’s What Jody Means In The Military

For the most part, the military is no nonsense, orderly, and disciplined.

As a result, acronyms like MAGIC CARPET and DISCO appear contradictory to the atmosphere of the military.

Maritime Augmented Guidance with Integrated Controls for Carrier Approach and Recovery Precision Enabling Technologies (MAGIC CARPET) is quite the mouthful.

It almost seems like the title was crafted together specifically to reflect that abbreviation.

Meanwhile, processing requests at the DISCO (Defense Industrial Security Clearance Office) is not nearly as glamorous as one would assume.

Finally, MARS is not a highly-confidential mission to the moon but the acronym for the Military Affiliate Radio System.

There are phrases in the military that make no sense or are only effective when taken in the right context.

For example, FONSI is short for “finding of no significant impact”.

In context, there is really nothing humorous about the phrase other than FONSI is a funny sounding military acronym.

The same could be said for BOHICA, another quagmire.

BOHICA, when used in the right context, can describe an unpopular superior or an event that is about to happen which is stupid yet necessary to endear.

In other words, it’s like saying “Something really dumb is about to happen. Just go with it.”

The other interpretation for BOHICA is “bend over, here it comes again.”

However, where BOHICA gets strange and funny is when military personnel use it in everyday speech with civilians.

Therefore, avoid throwing this one into general conversation as most people have no idea what you mean!

You think the U.S. Armed Forces could have came up with a better title than Common Access Card (CAC) to describe its military ID.

For starters, using “CAC” in any sentence makes the person addressing someone sound like they are from back east (Boston, perhaps?).

Despite the amusing name, CAC cards are vital and necessary to carry at all times.

Service members must present their CACs at military installations as well as to gain access to DoD computer systems.

However, the fact that you need to insert a CAC into a VAG (virtual access gateway) for special access – is a joke that writes itself.

The acronyms the military develops are designed to be memorable.

Nevertheless, based on pronunciation, military acronyms are usually funny, too.

By accident or design, abbreviations like DRBOB have evidence of being “backronyms”.

In other words, they started out with a shortened abbreviation yet were expanded to create a more memorable acronym.

How else can you explain DRBOB, an otherwise forgettable Defense Resale Business Optimization Board?

DRBOB creates a few smirks in reference to the co-founder of Alcoholics Anonymous (AA), Dr. Bob.

Speaking of references to prominent individuals, the military acronym AOC took on a whole meaning after the election of Alexandria Ocasio-Cortez.

The polarizing young representative from New York has sparked plenty of debate depending on what side of the political spectrum you lean.

Whereas DICC was popular during the reign of Vice President Cheney, AOC has also taken on new leverage.

In the military, AOC means nothing more than “Army Operating Concept” – or a plan for the future.

Now, the designation may cause applause or shivers depending on your political affiliation.

The U.S. Armed Forces has plenty of acronyms that are related to food, as well.

Then, there are sophisticated abbreviations that appear created on purpose because someone was craving NACHOS (Naonscale Architectures for Coherent Hyper-Optic Sources).

These acronyms redeem it for the others that sound repulsive or twisted.

Last but not least, FISTer is easily one of the more funny military acronyms.

We don’t need to expand into great detail to explain what image the term creates in most people’s head.

In the military, a FISTer is a Fire Support Specialists.

These soldiers serve as forward observes in artillery units situated on the battlefield.

As a result, they have the responsibility of calling in fire support.

Fire Support Specialists are crucial to operations and that doesn’t prevent them from proudly reminding others daily about their association.

The military is constantly evolving including creating new acronyms to describe roles, equipment, programs, and operations.

As such, there are hundreds of military acronyms, some of them very funny.

While by design or accident, funny military acronyms are a temporary joke or distraction from the seriousness of warfare.

It’s the equivalent of having a running joke at a place of business or within a school organization.

Therefore, the funniest military acronyms are embraced with both pride and shame, laughs and embarrassment. 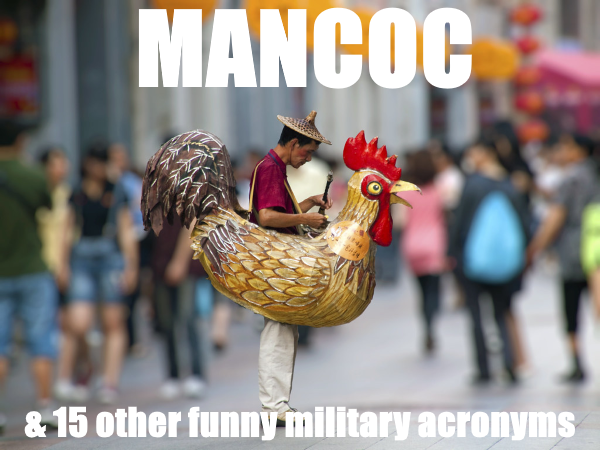 Military acronyms are funny whether intentional or not. The military relies on acronyms for brevity yet that also makes them hilarious, too.