When people think Combat Jobs in the Navy, they usually only think of one thing: Navy SEALs

What most don’t realize is, there are numerous other combat jobs that you can join up with.

While they don’t necessarily share the prestige and exposure that SEALs do, they are nevertheless an important part of the Navy’s overall mission.

Here are 5 of the best combat jobs in the US Navy.

Note: Click Here to read our full article on VBSS.

One of the most well-known combat jobs (if you can really even call it that) is Visit, Board, Search, Seizure, otherwise known as VBSS.

VBSS teams do exactly what it sounds like; they visit ships, board them, search them, and in some cases seize them.

This is an essential mission in certain areas of the world, including the Persian Gulf, Gulf of Aden, and the Arabian Sea.

Most VBSS teams in the Navy are made up of a variety of on-board personnel.

The thing that differentiates them from the other combat jobs in the Navy is that it’s not actually it’s own rating.

When you serve on a VBSS team, you do so essentially as a volunteer.

While not operating in the capacity of a VBSS team, you’ll be doing whatever your full time rating and/or job is.

That could be everything from an electricians mate to a hull technician.

A typical day in the life of a VBSS team member might include boarding a ship, examining their cargo and logs, and questioning crew members.

Because of the nature of their mission, VBSS team members receive hazardous duty pay in additional to their normal pay.

“We build, We fight”

That’s the official motto of the US Navy Seabees, a branch of the Navy that doubles as both builders and soldiers.

Officially known as Naval Construction Battalions (CBs, get it?), Seabees are another one of the best combat jobs you can have in the Navy.

They are divided up into 7 occupational field ratings:

Their primary mission is to construct and maintain American military bases around the world, as well as support humanitarian efforts in war-torn regions.

As a result, they are often in direct contact with enemy forces.

They are essentially trained both as builders, as well as combat soldiers.

All Seabees get their start at Fort Leonard Wood in Missouri after Navy boot camp, and training lasts a little over 3 months.

The life of a Seabee can be both rewarding, as well as exciting, making it one of the most sought after jobs the Navy has to offer.

Additionally, the skills you learn as a Seabee can directly translate into many civilian jobs.

If you’re looking to be in the thick of it on the battlefield, then becoming a corpsman will get you there.

They are the most highly awarded and decorated rate in the United States Navy.

Just like the other enlisted rates, applicants must have a high school diploma or equivalent.

There are 38 different medical specialties to choose from when becoming a corpsman, but two in particular see the most combat—Field Medical Service Technicians and Special Amphibious Reconnaissance Corpsmen (SARC).

The Marine Corps does not have their own medics, so they rely on the Navy for all medical care needs.

Fleet Marine Force (FMF) corpsmen are trained for the battlefield.

Those that work with Marines are considered “green side,” while “blue side” corpsmen work on ships, in hospitals or clinics.

They are generally attached to Marine Recon units or attached to U.S. Special Operations Command (USSOCOM).

SARCs are also trained to operate hyperbaric chambers which they learn to recompress for hyperbaric treatment.

SWCC provide vital mission support to the Navy SEALs, but they aren’t actually SEALs themselves.

They operate high-performance boats, protect the waters from enemy combatants globally, and are overall apart of an elite team that carries out special operation missions.

Additionally, SWCC conduct some of their own special reconnaissance missions. Some of the various duties you may perform as a SWCC include:

Navy SWCC can be either enlisted personnel or a warrant officer. Senior enlisted SWCC operators with years of experience may apply for commissioning as a Chief Warrant Officers (CWO).

If you are a civilian and want to become a Navy SWCC operator, talk to your local Navy recruiter and if you are currently in the Navy, speak with your Command Career Counselor, LPO, or LCPO.

You can also contact the SEAL and SWCC Scout Team for more information.

No combat jobs in the Navy list would be complete without a mention and discussion of the Navy’s primary special operations force: The US Navy SEALs

A Navy SEAL can be either enlisted or an officer, depending on the amount of responsibilities and leadership role you want to put yourself in.

They are members of the Naval Special Warfare (NSW) community who take on the most seemingly impossible missions and objectives.

Navy SEAL training is considered to be the most physically and mentally demanding in the military.

Their motto says it all, “The only easy day was yesterday.”

One other Navy job that is technically a combat job would be Explosive Ordnance Disposal technicians, or EOD.

These are the guys you see dressed up in those bulky suits, faceplate, and other clunky gear.

They are responsible for the safe disarmament and disposal of explosives, and it can be a very “nail biting” job.

With that said, they are highly trained experts that keep their cool under pressure.

As you can see, there are plenty of combat jobs in the Navy that don’t demand you to go through the rigors of BUD/S (the training requirement for SEALS).

There are actually several other jobs in the Navy that are considered combat-related, but these are the only ones that involve on-the-ground operations.

If you’re thinking about enlisting and want to be involved in the action, definitely talk to your recruiter about one of these career choices. 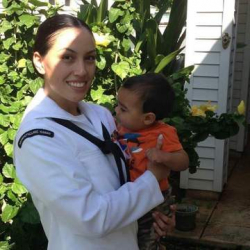 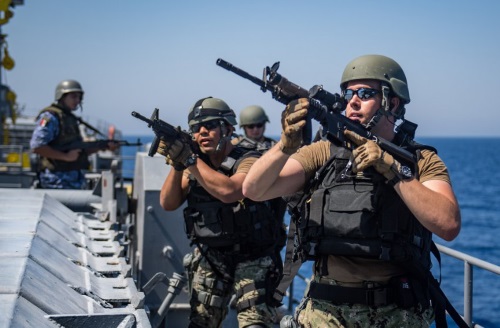 4 Replies to “5 Best Combat Jobs In The US Navy”