Navy SEALs conduct some of the most sophisticated and dangerous operations in the world.

There are many benefits to becoming a Navy SEAL including the prestige and satisfaction of serving the country in such an important capacity.

Continue reading to learn more about the 8 benefits of being a Navy SEAL:

Navy SEALs deserve improved pay because of the many hazards and conflicts they encounter while serving the country.

The United States relies on Navy SEAL teams to handle small-unit special operation missions that may partake in a variety of cumbersome climates.

However, they also receive two substantial bonuses for the special forces work.

The first bonus is awarded after you qualify for Navy SEAL basic training.

Special bonuses allow SEALs to earn a decent living even if they are still underpaid for all their skills and attributes.

SEALs may receive special bonuses for diving, parachuting, and demolitions.

All in all, Navy SEALs can potentially earn hundreds each month in extra revenue for serving the country in such a dangerous capacity.

U.S. Navy SEALs are one of the most recognizable special forces in not only the country but the entire world.

Navy SEALs command a high degree of respect for their intense levels of training and capabilities.

All in all, U.S. Navy SEALs are one of the nearest things the country has to a “super soldier”.

Navy SEALs are primarily responsible for capturing the enemy, some of which are very high-level targets.

SEALs may also gather intelligence and reconnaissance for the United States government.

They traditionally work in foreign environments, and in a variety of climates and weather.

For this reason, there is a tremendous amount of prestige and honor in becoming a U.S. Navy SEAL.

Even people that do not know much about the military are traditionally in awe of Navy SEALs because of the extensive media coverage surrounding them.

Consequently, most Navy SEALs are incredibly proud and grateful for their time served in special forces.

They usually build a very strong connection with their small units and commodore within the branch.

There are less than 2,500 active-duty Navy SEALs in the world so the fraternity is not only small but extremely close and loyal.

On top of that, as an active duty SEAL, you can potentially have a crack at trying out for their elite counter-terrorism force.

You know who I’m talking about…SEAL Team 6, or DEVGRU as they’re official known.

They are by far one of the most prestigious and well-known special operations forces in the world.

As of 2020, all active SEALs in special forces are males, however, the department did open enlistment to females starting in 2015.

Navy SEALs are not only admired by civilians but also other sailors and practically every member of the U.S. Armed Forces.

Therefore, if you are looking to make a statement and seek high status, joining the U.S. Navy SEALs is one of the best decisions you can make (so long as you can pass training).

Navy SEALs also enter a promising job market after they decide to retire from the military.

Every former service member has concerns about returning to the civilian world and landing steady employment.

Unfortunately, some ratings (military jobs) in the U.S. Navy have more crossover appeal to civilian employers compared to enlisted personnel that handles a job specific to the military.

Nonetheless, every service member has opportunities after leaving the United States Navy because of your resume.

Employers prefer hiring veterans because they acquire skills and high character attributes that are hard to find in other prospective employees.

While most of the work they perform is specific to the U.S. Navy, having the title “U.S. Navy SEAL” on a resume stands out.

There is a good chance not only your hiring manager and supervisor will be interested in your time serving the country, as well as coworkers.

Thus, existing SEALs shouldn’t have a problem landing civilian work after retiring from the Navy (especially if you don’t mind starting a new career).

Navy SEALs often work in private security or law enforcement because some of their training is applicable to the civilian world.

They can also continue to serve the federal or state government in some capacity, for example working with the CIA or FBI.

The job opportunities that are available after leaving the military rank among the 8 Benefits of Being a Navy SEAL.

They frequently tour around the world and engage in small conflicts with the enemy.

SEALs serve as first-line special operatives that generally attack the enemy before enlisted forces arrive in the same setting.

Despite all their hard work and our reliance on Navy SEALs for personal freedom and independence, they don’t get much time to relax.

Thankfully, the U.S. Armed Forces provide PTO (paid time off) to every single employee of the military, including special forces.

As a result, Navy SEALs earn vacation time like other paid employees of the federal government.

They may use this paid time off work to spend time with family and friends which is incredibly important.

It allows SEALs to relax and enjoy some leisure before they return to protecting the country from outside dangers.

The military actually provides a decent benefits package even if some sailors complain that they are underpaid based on basic salary.

It’s extremely vital to have high-quality health insurance in an era where it is becoming harder to find an employer willing to offer this type of benefit.

Medical insurance covers you and your family from emergencies that may require a trip to the ER or surgery.

Furthermore, the U.S. Navy offers dental coverage to sailors to protect their teeth.

Oral health care is also very important and staying up-to-date with checkups keeps you healthy out on the road.

You and your family will appreciate these benefits and it’s easy to understand why getting health insurance is one of the 8 benefits of being a Navy SEAL.

There is one aspect of serving the United States Navy that people regularly fail to highlight – retirement.

What other job industry do you know where you can serve the country for 20 years, get paid, and retire in less than two decades?

It is possible to retire early through your efforts with the U.S. Navy and special forces.

While you will not earn enough money to stop working after you retire from the military, the benefits you receive continue if you serve the country long enough.

There are many other incentives for making the military your career like reattribution bonuses.

Navy SEALs work hard yet after a couple of decades of service may retire early and transition into civilian life.

You’ll continue to receive payments from the federal government for the rest of your life as well as financial aid for returning to school.

Thus, former SEALs often have the choice between finding a civilian job or returning to school before they figure out their next step in life.

Nonetheless, serving the country for just 20 years can equal a nice, fat paycheck from Uncle Sam for the rest of your life!

#2 – Belonging to a Brotherhood

“The Men With Green Faces” represents a brotherhood within the United States Navy.

Navy SEALs originate from the 1960s and Vietnam War, yet have roots that date back much further in the history of special forces.

As a result, Navy SEALs are very proud of their history and reputation within the U.S. Armed Forces.

There are less than 2,500 SEALs which makes the fraternity very small and close.

SEALs go by nicknames like “Frogmen” and “The Men With Green Faces”.

They frequently recite the motto “The Only Easy Day Was Yesterday” and “It Pays To Be A Winner”.

Belonging to a special brotherhood like the Navy SEALs offers a place of belonging and acceptance for new recruits.

There are many that strive to become a Navy SEAL yet only a select few will officially make it past training.

If you are fortunate enough, you can guarantee that you have become a member of a super-elite and special group among the troops.

The remaining advantage of being a Navy SEAL is housing.

Housing is expensive and competitive in many places in the United States, especially for families with children.

The military assists military families by providing housing while they are stationed somewhere away from home.

Thus, military personnel has the option of living on the base or relocating somewhere nearby.

Basic Allowance for Housing is provided each month when you elect not to use government-provided housing like on a military base.

The BAH of each service member depends on their location, pay grade, and the number of dependants (if applicable).

Additionally, the government takes into account property values in the area when establishing your BAH.

Nonetheless, Navy BAH offers an allowance for housing if you do not wish to live on a military base or other forms of government-provided housing.

The United States Navy SEALs are a special forces division of the military branch.

There are less than 2,500 Navy SEALs in the world and the fraternity is super tight.

If you are fortunate enough to enlist and make it through SEAL training, you’ll join one of the most prestigious special forces in the world.

There are 8 benefits of being a Navy SEAL that serves you well not only during your time in the military but for the rest of your life. 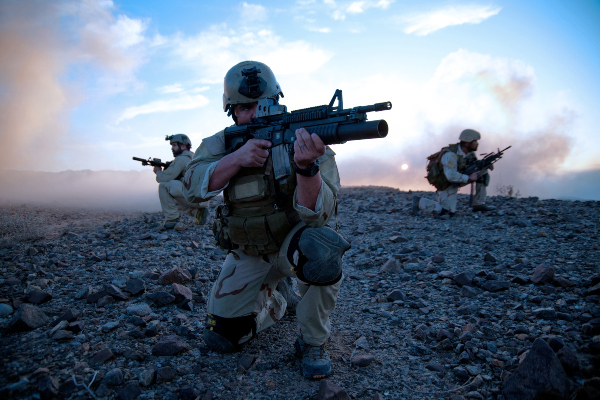 There are numerous Navy SEAL benefits that make it an attractive choice for military service. See what the pros and cons of being a Frogman are here.