If you are new to the Army, you have heard of Army Class A uniforms and are likely confused about the uniform class difference.

The Army has a Class A uniform, which has similarities and differences from the Class B uniform.

However, the Class C uniform is a little easier to understand.

Currently, the Army has three service uniforms, which we will review.

However, the third service uniform is in the process of phasing in, and new recruits receive all three informs.

The Class A Uniform for the Army is the more formal of the three.

Typically, the more formal Class A uniform is referenced as ‘Blues’ and the Service Uniform.

All Army soldiers have a standard black beret to wear with the Class A uniform. The patch positions over the left eye, with the overhang going to the right.

For soldiers who are special forces or Rangers, their berets are of different colors.

However, some soldiers may wear a blue service cap, depending on their position.

Soldiers wear a long or short-sleeved white button-up collared shirt for the Class A Service Uniform.

Those who are general officers wear a dark blue jacket for their Class A uniform.

However, everyone else wears a lighter blue jacket.

There are specific rules for badges, names, and other insignia for the formal Service Dress uniform.

Men wear a tie with their Class As.

The tie is either black satin or silk.

Also, there are three different knot options, including the Windsor, half-Windsor, or the four-in-hand.

Soldiers wear a black belt with the Class A uniform.

Also, those who hold the rank E5 and higher have gold trim on the pants.

Women may opt for a skirt instead of trousers.

Shiny, black leather shoes are necessary for both men and women.

The Army is phasing in the new Army Green Service Uniform, which is often called Class B.

The style of uniform is a classic throw-back to the popular style after World War II.

The decision came about in 2018, and the new uniforms are available to buy for those already in the Army.

However, new recruits and senior officials began to have issued the new uniforms since the end of 2018.

The expectation is phase three will have the new uniforms in the closets of soldiers between now and the end of 2027.

The caps for the Class B Army uniform are the garrison cap.

A garrison cap is a hat without a brim.

However, a service cap is a variation of this new uniform.

The shirts are a darker tan in color.

Also, all buttons must remain fastened.

Some of the shirts are short-sleeved while others are long.

The jacket for the new Class B uniform is a classic throwback to World War II.

One jacket option is the ‘Marshall” style, but other styles are up for consideration.

However, jackets are optional with the Class B uniform.

The pants or skirt are the same color as the shirt.

Skirts are optional for women.

Brown shoes are necessary for the Class B Army uniform.

However, some MOS call for jump boots instead of brown shoes.

Ties are not worn with the short-sleeved button-up shirt option.

However, long-sleeved shirts do require a tie.

Those servicing in a tropical environment will see a variation of this uniform that is more suitable for the climate.

However, the base commander makes that call if the tropical version of the Class B’s is suitable.

When you think of soldiers in the Army, you likely imagine the popular camouflaged uniform.

The Class C, or Combat Uniform, is the daily uniform worn by soldiers.

There are two different colors of camouflage.

The first is the highly recognized green camouflage, while the other is a lighter, more neutral tan color that blends into different backgrounds.

The patrol cap has the insignia on the front with the soldier’s last name on the back.

Also, it is regulation that the soldier’s hairstyle does not interfere with the wearing of the patrol cap.

Lastly, the camouflage will match that as the rest of the Class C uniform.

However, some soldiers, depending on their MOS, wear berets instead.

Badges are sewn on the Class C jacket.

The jacket is a colored shirt-type jacket with sleeves that roll up or down.

If a soldier is not on deployment, they also wear a patch reflecting the flag of the United States.

The tee worn under the Combat Uniform jacket is either sand or tan in color.

Belts are a part of the Army Class C uniform, and the approved colors are the same as the tee.

The boots for the Class C Army uniform are coyote or tan leather.

Soldiers own two boots for hot weather wear and one for colder temperatures.

Soldiers are issued boots, but many buy their boots from other retailers.

However, be sure the boots are compliant with Army Regulation 670-1, which defines the expectations of Army Uniforms.

The Class C Army Combat Uniform includes pants that must be either bloused at the bottom or tucked into the boots.

Best Military Uniforms in the World

What To Do With Old Military Uniforms 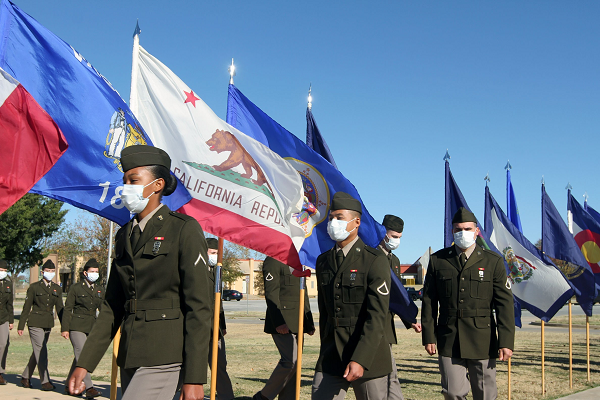 Learn more about the differences between Army Class A, B, and C uniforms, including when and where to wear Army Dress and Greens.