Army Parachute Riggers (MOS 92R) have an important job of handling parachutes and their packaging.

Paratroopers rely on Parachute Riggers (92R MOS) to not only carefully pack the rig, but also supervise and repair the cargo when necessary.

Army Parachute Riggers have to go through rigorous training yet can spend a fulfilling time in the Army serving an important purpose.

Army Parachute Riggers (MOS 92R) have an important responsibility in the military.

After all, lives are at stake depending on how they handle and repair aerial equipment like parachutes.

Are you interested in joining the Army and becoming 92R MOS?

Here is all the education, qualifications, and training you need to complete in order to start your military career.

The Army is a demanding place yet allows you to grow both in a career and as a person.

The first step to joining the Army is finishing high school with a diploma or receiving your GED.

Those that are interested in becoming an Army Parachute Rigger (MOS 92R) may also want to consider some college credit or even a degree.

There are many soldiers that wish to work 92R MOS so the competition is stiff.

You will need to complete the Armed Services Vocational Aptitude Battery (ASVAB).

The ASVAB is a combination of tests that allow the military to better understand your strengths and weaknesses.

In terms of qualifications for a Parachute Rigger, the Army focuses more on personal assets and attributes to gauge prospective candidates.

The Army has helped make it more understandable as to the type of person they are looking for regarding MOS 92R.

High attention to detail is commonly cited as the most important characteristic of high-quality Army Parachute Riggers.

The Army really emphasizes attention to detail with 92R MOS because one mistake on the job could lead to tragedy.

Consequently, Army Parachute Riggers must not only constantly pay attention to what they are doing, but also check and recheck the handling of their parachutes.

Secondly, those that are mechanically inclined will do well as a Parachute Rigger since you regularly perform maintenance and repairs.

Army Parachute Riggers are also great team players that can work alongside other paratroopers and forge a long-lasting relationship.

If you survive Basic Combat Training then it is time to progress to your Advanced Individual Training.

AIT will focus entirely on your Military Occupational Specialty (MOS).

Advanced Individual Training varies in time based on the MOS, and for 92R you can expect 16 weeks to complete the combination of classroom and field learning.

You will learn more about Army rigging techniques and maintenance of air-sea rescue equipment.

There is also a focus on the repair of inflatable rafts and other survival equipment.

What does an Army Parachute Rigger Do?

An Army Parachute Rigger (MOS 92R) may primarily deal with parachutes, yet the job duties call for much more than just that emphasis.

Army Parachute Riggers are jacks of all trades that have the ability to make high-quality repairs with the upmost safety in mind.

Covering all the job duties of MOS 92R is not possible until you join the Army and learn more, yet here are the basics.

As the name suggests in the MOS, Army Parachute Riggers are assigned to handle, supervise, and repair equipment, supplies, and vehicles for airdrops.

They also focus on fixing webbed equipment and clothing.

Riggers are tasked with the fabrication and assembly of airdrop platforms, rigging components, cushioning materials, and other equipment.

A huge part of the role of an Army Parachute Rigger is to load and secure supplies into an aircraft prior to departure.

By this time, MOS 92Rs have performed technical, routine, and in-storage inspections on cargo, extraction, and personnel parachutes.

Inspecting parachutes and other airdrop equipment is a routine that is very important to ensuring the safety of paratroopers.

Consequently, Parachute Riggers will inspect equipment before, during, and after each use.

Riggers focus on the parachutes, their extraction and release systems, and basically every single part no matter how minor.

If one mechanism fails the entire parachute could become inoperable and potentially spell a horrific hazard.

When inspections do not meet rigorous Army testing and standards it is time to make repairs in order to ensure optimal safety.

Paratroopers would not take to the air so confidently if it was not for their trust in qualified, attention-to-detail oriented Parachute Riggers (MOS 92R).

They do inventory and issue all the airdrop equipment used in an operation.

It is important that machines and tools used for fabrication, modification, and repair are reliable and in working order in order to make quick adjustments, if needed.

Lastly, you may have the rare opportunity to join paratroopers and experience what it is like to jump thousands of feet out of an airplane!

What does an Army Parachute Rigger make?

The Army pays soldiers based on years of service and rank.

Most Army Parachute Riggers have ranks between E-1 and E-4.

The lowest classifications and pay-grades on the spectrum, however, you can quickly advance with the right work ethic.

E-3 and E-4 Army Parachute Riggers may earn higher salaries than the table (below) based on experience.

Additionally, soldiers with some experience and higher rank can earn hazard pay, which currently ranges from an additional $150 to $165 per month.

The U.S. Army has several benefits included with a monthly salary:

There are plenty of job reviews associated with an Army Parachute Rigger (MOS 92R) around the web.

The general consensus is it is difficult to beat the MOS given the opportunities to learn and the ability to do something rare and unique.

Parachute Riggers have a close relationship with the paratroopers and pilots they serve which helps build a special bond only they can share.

The best review we located on Indeed.com came from this soldier: 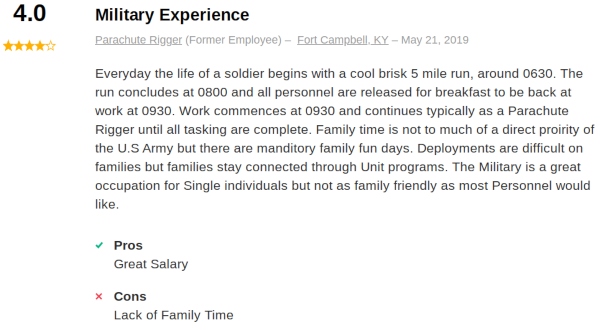 Even though the role of a Parachute Rigger may sound exclusive to the Army there are actually other related jobs.

For example, parachute rigging and supply companies like to provide opportunities to former MOS 92R.

These types of companies prefer Army Parachute Riggers because they have become experts in airdrops.

Regardless of the occupation, the skills you achieve in the U.S. Army will prepare you well for civilian life.

There is no shortage of possibilities from working on commercial airlines to consulting survival equipment manufacturers.

Other jobs that you may want to consider based on the need to have a high attention to detail include:

An Army Parachute Rigger (MOS 92R) is an expert in airdrops.

They help rig equipment and parachutes to perform at maximum level once they are dropped from aircraft.

The military role calls for close attention to detail, as Army Parachute Riggers must ensure that parachutes and other airdrop equipment are carefully inspected, loaded, and prepared to extract properly.

As a result, Army Parachute Riggers feel like they serve an important purpose knowing that they help keep paratroopers safe in the sky.

What ASVAB scores do you need for MOS 92R?

To become an Army Parachute Rigger (MOS 92R), you’ll need score an 88 on General Maintenance and an 87 on Combat when you take the Armed Services Vocational Battery.

How long is AIT for an Army Parachute Rigger (MOS 92R)?

Advanced Individual Training (AIT) to be an Army Parachute Rigger lasts for 16 weeks to complete the combination of classroom and field learning. You’ll learn how to rig and maintain air-sea rescue equipment, inflatable rafts, and other survival equipment.

What is the 92 Series MOS field in the Army?

The 92 Series is also known as the Quartermasters Corps, and it includes several specialties that supply Army with supplies. They include logistics, petroleum supplies, food service, laundry, parachute riggers, and even mortuary affairs.

The distinctive red ball cap for parachute riggers was adopted in 1949 by the 11th Parachute Maintenance Company, and its wear was used to help identify riggers in critical areas like loading areas and drops zones.

Army Parachute Riggers are expected to jump with parachutes that they’ve packed and must jump once every three months to maintain their status.