The U.S. Army has reinstated its “pinks and greens,” a new edition of uniform that pays homage to the original service uniforms of the World War II era.

The new Army pinks and greens, designated and referred to as Army Greens, are to be completely phased in as the new service uniform by 2028.

This uniform is a tribute to the heritage of those in the Army who served more than 60 years ago and a revival of one of the most iconic-looking military uniforms.

Here are 8 things you need to know about Army pinks and greens.

1. The Return Of Pinks And Greens To The Army

In 2018, the U.S. Army announced that a new version of the World War II “pinks and greens” uniform will be instated as the new everyday dress uniform.

The first prototypes of this uniform revival were showcased at the Association of the United States Army’s annual meeting in 2017.

The final version of the uniform is intended to be a historically accurate representation of General George C. Marshall’s uniform.

Marshall served in the position of Army Chief of Staff during the Second World War.

In addition, female soldiers will have options for their shoes.

Additional items for the uniform will also be available for soldiers to purchase, such as the “Ike” jacket.

This jacket is based on the “cropped” coat worn and made famous by General Dwight D. Eisenhower during World War II.

Other add-ons for the new Army Greens uniform include:

The Army began issuing the new pinks and greens, known officially as Army Greens, in 2020.

The Army Greens, featuring updated khaki-colored pants and a green jacket, will become the new service uniform by 2028.

This means that Army Greens will be the everyday business-wear uniform, mandatory for all soldiers in 2028.

2. Is This Army Uniform Actually Pink And Green?

The Army “pink and green” uniform does not actually feature any pink at all.

However, there is a very slight pinkish tone to the taupe khaki trousers and skirts worn as part of the traditional-looking uniform.

In fact, pink is among the colors that are against regulations for the Army’s grooming standards, as it is deemed unprofessional.

The official name of the Army’s new uniform is “Army Greens.”

Therefore, there is no mention of “pinks” and a subtle encouragement to refrain from using or applying the reference “pinks and greens.”

Related Article – Army Class A, B, And C Uniforms Explained

Army Greens are intended to be “cost-neutral” for enlisted soldiers whose annual clothing allowance should cover their purchase.

Enlisted service members receive a uniform when they enter the Army and an annual clothing allowance for uniform repairs and replacements.

Officers typically receive a clothing allowance when they report for active duty, but do not receive stipends for repairs or replacements.

The initial cost estimate for the new Army Green Service Uniform dress coat was $163 for enlisted female soldiers and $82 for enlisted men.

This overall disparity in uniform costs has been labeled the “pink tax.”

The pink tax refers to an imbalance reflecting the fact that there is typically a higher cost associated with uniforms and other “non-military” clothing items for female service members when compared to those for males.

Therefore, the Army-wide uniform change to Army Greens put a spotlight on the pink tax issue and brought forth the FATIGUES Act of 2021.

The Military Forces Assuring that Treatment of Items by Gender are Uniform and Equal across the Services (FATIGUES) Act of 2021 was passed in the Senate.

The bill was part of the National Defense Authorization Act of that year.

This legislation supports and has a direct financial impact on female soldiers and service members across the military.

Lawmakers brought to light the cost disparity among male and female service members for the purchase of necessary wearable items.

Such disparity indicated an unfavorable financial burden for women in the military.

Research was conducted by the nonpartisan Government Accountability Office.

This confirmed and revealed that out-of-pocket uniform costs for military women were almost double that for men.

Therefore, this bill eliminates the pink tax on military uniforms by addressing and balancing such financial gender inequities in the military.

4. Origin Of “Pinks And Greens” Term

The “pinks and greens” nickname for the Army uniform of World War II was a colloquial term originated by the soldiers at that time.

World War II soldiers started this nickname for the uniform because one of the sets of pants had a slightly pink hue, which was paired with a dark green coat.

The pinks and greens were worn during the Korean War as well as World War II.

5. Brief History Of Pinks And Greens

The original pinks and greens uniform was developed between World War I and World War II.

It was a variant of the Army officer’s service uniform, which featured a dark green coat and matching colored, “olive drab,” trousers.

In 1924, an alternate option of trousers was offered in a contrasting taupe color, eventually displacing the olive drab pants.

The pinks and greens uniform was deauthorized for active duty, reserve, and National Guard officers between 1958 and 1959.

It was replaced by “Class A” service uniforms, worn by all ranks.

The Class A uniform featured a matching coat and pants in a grayish-green shade.

6. Reasons For The Revival Of WWII Uniform Look

The adoption of the new uniform is intended to serve a middle purpose between the formal Army dress blues and the Army combat uniform.

It will fill the gap created by the deauthorization of the former Army Green uniform that was in place from 1954 to 2015.

Though the revival of the pinks and greens uniform will be known as Army Greens, this look will be an homage by current Army soldiers.

The uniforms pay tribute to what is known as the “Greatest Generation,” or the G.I. Generation of the Second World War and those who served.

Here are some further reasons for the Army bringing back this uniform look:

After nearly six decades of absence, the revival of pinks and greens as Army Greens will be a tribute to military heritage.

In addition, it reflects a recognition of a proud uniform tradition.

7. What Will Happen To The Blue ASU (Army Service Uniform)

In 2014, the Army retired the dress green uniform which had been in place for six decades.

The dress greens were replaced by the blue Army Service Uniform, a version of the Army dress blue uniform.

With the implementation of Army Greens as the general service uniform, the blue Army Service Uniform will resume its status as a formal dress uniform.

These “dress blues” will return to their former use for ceremonial and parade occasions.

The overall response to the new Army Greens uniform has been positive.

The reinstated pinks and greens is considered a modernized yet historically accurate version of the Army’s perhaps most recognized uniform.

Army leaders anticipate that this revitalized and updated uniform will enhance pride among service members when wearing it.

There is also an expectation that the new uniforms will be an important element in Army recruitment.

This includes a positive restoration of the image of military service to the country among the public.

In addition, soldiers of all ranks reportedly prefer the uniform as everyday business attire, in favor of the previous blue Army Service Uniform.

Reasons for this approval include the higher quality fabrics featured in the new uniforms, allowing them greater durability and longevity.

Unlike some of the previous uniform sets, the Army Greens are tailored to fit each soldier.

This provides a sharp, distinctive, and commanding look.

Additionally, the manufacturing of the Army Greens incorporates an environmentally friendly textile production.

This production process for the uniforms is used for the first time in the United States. 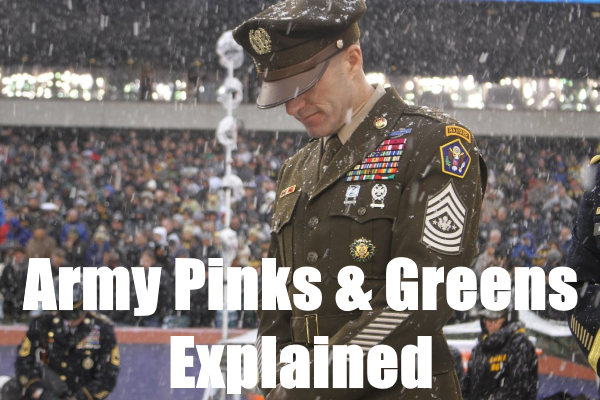 The Army Pinks and Greens uniform is a revival of the Army uniforms from years past, learn more about them here.