Not everyone who joins the Armed Forces spends their entire career in the military.

Therefore, upon completion of their military service, many members move on to jobs in the civilian sector.

There are several military careers that qualify Soldiers, Sailors, Airmen, and Marines for excellent job opportunities outside of the military.

Here is a list of the 15 best jobs for service members to seek after the military.

One of the most sought-after professions in the legal field, paralegals are responsible for helping out with the day-to-day activities of lawyers.

They differ from legal secretaries in that paralegals have a deeper understanding of the law and how it’s interpreted.

Paralegals essentially work under the direct supervision of a practicing attorney and can tend to many of the same tasks that lawyers do.

According to Indeed, the typical salary for a paralegal hovers around $52,000 nationally.

Obviously that number can be much higher, depending on the firm at which you work, your experience level, and your location in the U.S.

Some of the military jobs that would prepare for a career as a paralegal include:

Another profession that offers an easy transition from military service to the civilian sector is financial consultant.

A civilian financial consultant may work with individuals, families, or businesses in support of financial planning.

They would construct plans to meet the financial objectives of their clients, including preparation for retirement, estate planning, investments, and tax strategies.

Median pay for a financial consultant is about $88,000 per year, and there is positive projected job growth.

A military fiscal technician is responsible for budgeting, reviewing expenses, and other unit financial and accounting responsibilities.

This position would prepare you to become a civilian financial consultant.

Firefighters are essential to civilian communities, and those with military experience in this field are in demand.

Protection of property and people from fire is just part of the overall responsibilities in a career as a firefighter.

Firefighters are often among first responders in emergency situations, providing aid as paramedics and hazard prevention.

Indeed reports the national average salary for a firefighter at over $52,000 per year.

Since each branch of the Armed Forces features its own firefighting units, experience as a military firefighter in the Army, Navy, Marines, or Air Force would prepare you sufficiently to transition to a civilian firefighter.

This includes the layout of websites or pages, utilizing graphics, videos, pictures, and more.

The annual salary for a web designer is approximately $57,000 per year, depending on the field in which you work as well as your experience.

If you have military experience in web design or information technology, a career as a civilian web designer may be right for you.

These individuals plan, direct, and coordinate medical and health services.

Civilian healthcare managers may be in charge of medical facilities as a whole, specific departments, or other medical practices.

In the military, healthcare administrators manage military healthcare facilities, including hospitals and clinics.

They oversee medical and administrative functions to meet the healthcare needs of service members and their families.

According to Indeed, the average base salary for a healthcare manager is $60,891.

Physical fitness is an essential part of military service and mission readiness.

Service members can apply their skills, knowledge, and training to become a civilian personal trainer.

These goals may include:

The median annual salary for a personal trainer is reported at about $63,000.

This salary may vary depending on location, client base, and other factors.

Though serving in the military emphasizes physical fitness, a position as an Army master fitness trainer in the provides a strong foundation for becoming a civilian personal trainer.

A career as a human resources manager is another excellent option for those transitioning from military service to the civilian job sector.

This would include recruiting, hiring, consulting, and serving as a link between management and employees.

Median pay for HR managers is about $120,000 per year and can vary depending on the type of business.

The military features similar occupations in human resources to assist soldiers with their careers and support unit staff.

If you have served as an HR specialist in the military, you would be prepared for a civilian job as an HR manager.

A systems engineer may work in a variety of fields, including software, manufacturing, transportation, and product development.

Their job varies depending on the industry in which they work.

Overall, a systems engineer develops a process to create a program or product from beginning to end.

The annual salary for a systems engineer can range from $50,000 to $200,000, depending on the industry and person’s experience.

Being a military interpreter and/or translator is an important role in terms of communication and intelligence.

As a civilian career, an interpreter/translator professionally aids communication by translating communication in a source language to a target language.

This is beneficial in the fields of international relations, business, etc.

In general, the annual salary of an interpreter/translator is $45,000.

Some of the military jobs that would prepare for civilian interpreter and/or translator roles are:

Nurses are in extremely high demand in civilian communities.

Nurses provide medical care to patients in hospitals and clinics, including pre- and post-operative care.

Nurses are essential in the treatment, care, and support they provide for patients in all areas of health care.

Nursing salaries can be even higher depending on the person’s degrees, certifications, licenses, experience, etc.

There are nurses in each branch of the Armed Forces, serving in military hospitals and care facilities all over the world.

Therefore, whether you have served as a nurse in the Army, Air Force, Navy, or Marines, your experience and training make you a highly valuable candidate for civilian nursing jobs.

Information security is an ever-growing occupational field in the civilian as well as military world.

These measures are necessary for protection against cyberattacks and other organizational infrastructure threats.

The median pay for this position is about $98,000 and continues to rise.

Service members with occupational experience in any of the following fields would be well-prepared to become a civilian information security analyst:

Software developers, engineers, and programmers are essential in both the military and civilian worlds.

People in these occupations design, analyze, and implement programs that allow computer systems and applications to function properly.

In the military, software developers/engineers use their skills to enhance war fighting and intelligence capabilities.

These skills can also be applied in civilian jobs to organize and display data as well as ensure efficient and effective software operations and applications.

The average annual salary for a software developer/engineer is about $85,000.

Some of the military jobs that would prepare you to enter the civilian sector in this field include:

Aviation technicians/mechanics play vital roles in the operation and condition of aircraft.

This includes maintaining aviation equipment, making repairs, and providing inspections for all types of aircraft.

The average salary for this occupation is approximately $70,000 and depends on the person’s qualifications and experience in addition to other factors.

Since all branches of the Armed Forces feature some form of military aircraft, you would be well-prepared to transition to a civilian occupation with service experience as an aviation technician/mechanic.

After their service is complete, many military police officers transition into civilian law enforcement and/or security careers.

Similarly, civilian police and security officers provide protection and law enforcement for those under their jurisdiction.

In addition, they perform criminal investigations and emergency services in many cases.

The average national salary of a police/security officer is $42,000 per year.

Each branch of the Armed Forces has its own military police or security forces units.

Therefore, service members with this police/security experience would easily transition to a similar career in the civilian job market.

The field of government contractor appeals to many military service members searching for civilian occupations.

In general, government contractors compile project requirements and issue proposal requests and bid analyses in addition to awarding and managing the contract.

These contracts are often affiliated with defense, making valuable the roles of prior military service and leadership.

The average salary for government contractor is about $108,900 annually.

Experience in military logistics, finance, and even law is also beneficial for this occupation. 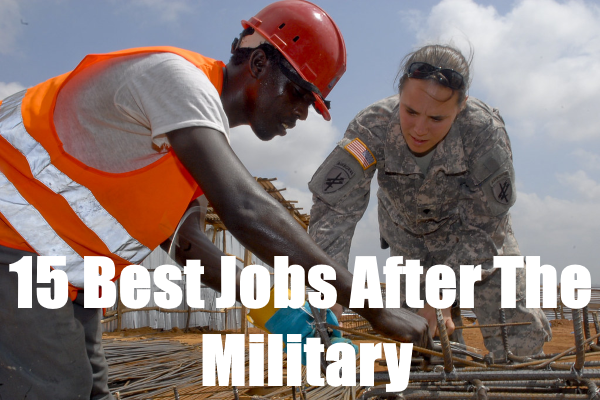 Jobs After The Military

If you're wondering what the best jobs are after the military, consider checking out these 15 options. Many of these are high paying jobs, that military veterans easily qualify for.