Florida is one of the most desirable places to live thanks to its culture and mild year-round temperatures.

The state is also home to several important military bases and installations.

Florida BAH rates vary depending on the city.

As a result, we have provided the Florida BAH rates for Jacksonville, Miami, Tampa Bay, Orlando, Pensacola, and more!

Alternatively, click here to calculate Florida BAH rates for any city in the state, or use the calculator below.

Jacksonville is surprisingly the largest city by area in the United States.

As a result, the city offers the widest selection of available housing.

Jacksonville transformed into a critical deep-water port city in the late 19th century.

For this reason, its home to several notable military ports and installations.

The military bases (along with nearby Naval Submarine Base Kings) represent the 3rd largest military presence in the United States:

Miami is another significant city in Florida for having a military presence.

The metropolis has one of the largest skylines in the country and is a major hub for finance, commerce, and international trade.

Tampa and St. Petersburg combine to form the Tampa Bay area along the Gulf Coast.

Tampa is the 3rd most populated city behind Jacksonville and Miami in Florida.

Meanwhile, St. Petersburg exists on the Pinellas peninsula directly between Tampa Bay and the Gulf of Mexico.

Tampa has been a noteworthy place for the military since the 19th century when Fort Brooke was established.

Orlando is also known by the nickname “The City Beautiful”.

It’s a fitting title even if Orlando is not situated directly on the shoreline (like most of the cities on the list).

Orlando attracts millions of tourists each year thanks to Disney World and Lake Eola Park.

Orlando is also home to a major hospital for the United States Navy:

Pensacola features one of the largest military presence in the state.

The city exists along the western portion of the Florida Panhandle with a major seaport.

The United States Navy built its first Air Station here and the region is also home to the world-famous Blue Angels flight team.

Explore some of the historic military landmarks in Pensacola, FL.

The region has a long history of conflict dating back to clashes with the British and Spanish.

Tyndall AFB was established shortly before the creation of the United States Air Force in 1947.

Today, its the base operating unit and host wing for the 325th Fighter Wing (325 FW) of the Air Combat Command (ACC).

Panama City is also home to a Navy Base under the command of the NSA:

Learn more about the history of Tyndall AFB.

Tallahassee – the capital of Florida – is the largest city in the Panhandle.

It’s also a little of an oasis outside the hustle and bustle of the larger metropolises in the state.

While there are no military bases directly in Tallahassee, it’s a reasonable drive to installations in Panama City.

Here are the Florida BAH rates for Tallahassee, FL:

Gainesville is another college town home to the University of Florida.

Furthermore, it’s the headquarters for Camp Blanding of the United States Army.

Camp Blanding was established in 1824 and has a rich history and tradition.

Camp Blanding also serves as a training center for many ROTC units in the U.S. Army and Navy.

Hera are the Florida BAH rates for Gainesville, FL:

Military families that are not huge fans of big cities can appreciate the small-town charm of Melbourne, Florida.

The city exists approximately an hour southeast of Orlando along the Atlantic Coast.

The harbor of Melbourne is directly opposite Satellite Beach and Cocoa Beach.

It’s also home to Patrick Air Force Base which was recently converted into a Space Force installation.

Patrick AFB has a long history starting with the U.S. Navy before getting transferred to the Air Force and, later, Space Force.

It plans to serve as a major installation for the new military branch that was created by former President Trump in 2020.

Fort Myers is another smaller community (population 62,300) south of the Tampa-St. Petersburg-Clearwater metroplex.

It’s a major tourist destination along the Gulf Coast as previous residents include Thomas Edison and Henry Ford.

Fort Myers was named after a military fort that was erected during the Seminole Wars.

It was also a significant player during the U.S. Civil War for the Confederate Army.

Today, Ft. Myers is a wonderful place to reside for military families even if nearby bases are a bit of a drive. 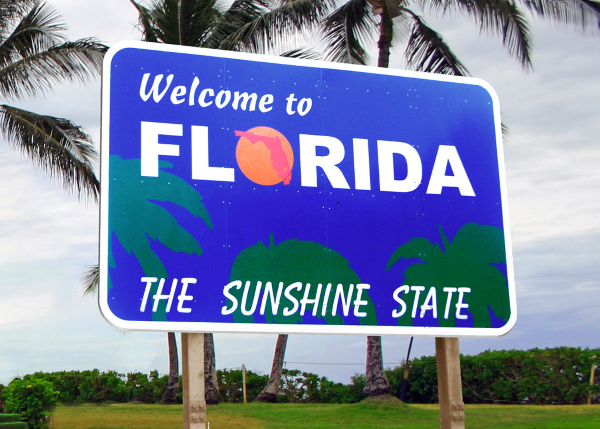 The Florida BAH rates attempt to make housing more affordable for military families. It offers a monthly rent check based on military rank.