There are a total of 7 active US Military bases in Arizona.

Since Arizona is landlocked, there are no Navy or Coast Guard bases in the state.

Overall Mission: Camp Navajo was established as a munitions depot supplying the Pacific theatre, but recently many of those responsibilities were transferred to other bases.

The base still stores some munitions but is primarily used as an industrial park.

The Army National Guard also performs training exercises at and around the base.

Overall Mission: Fort Huachuca began life as Camp Huachuca, a frontier base for the US cavalry.

Today, it primarily operates as an intelligence and communication hub for West Coast and Pacific operations.

It has also been used for testing and simulation of desert operations.

Overall Mission: Built in 1943, Yuma Proving Ground was briefly out of operation until the start of the Korean war.

It is one of the largest military bases in the world.

Overall Mission: Davis Monthan Air Force Base is a key part of Air Combat Command, and supplies many of the aircraft used in USAF West Coast and Pacific operations.

The base also contains one of the largest USAF “boneyards,” land fields where retired aircraft are stored and disassembled.

Overall Mission: Luke Air Force Base is a major training facility for the F-16 pilot program.

They are in the process of upgrading to the new F-35s and will house 144 of them once the upgrade is complete.

Luke AFB is also the home of the Goldwater Air Force Range, a bombing range for used for training, tests, and NATO operations.

Overall Mission: Marine Corps Air Station Yuma has at various points in its history belonged to the USAF and US Navy and has been under the control of the Marine Corps since 1959.

Multiple Harriers and F35 squadrons are hosted at the airfield. 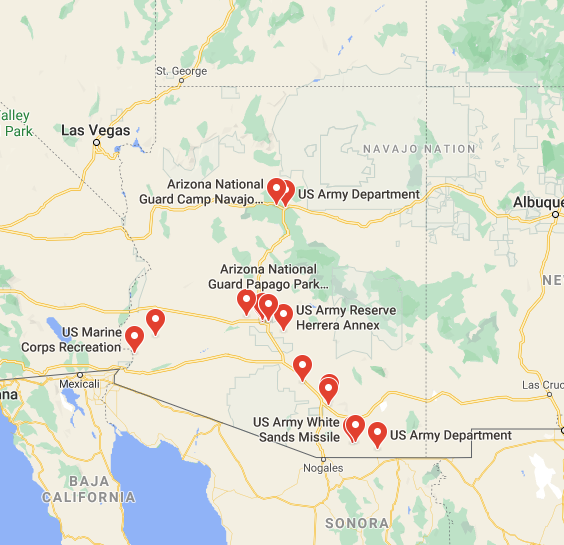 Arizona is home to 7 major US military bases. See a list of each Army, Air Force, and Marine Corps base in AZ, including when it was founded and their core mission.