The United States military has a fairly large number of installments in Japan, five of which are US Navy bases.

The history of US Navy bases in Japan varies greatly from site to site. Two of the Navy bases shown below were founded in the late 1800s.

One was founded around the time of the second world war, one around Vietnam, and one in the early 1970s.

The diverse history shows that each base was started to fulfill a specific need.

From import to departure and everything in between, the US Navy has many jobs to fill throughout its 5 bases in Japan.

Check out some information on each Navy base in Japan, its past, and what it does today below:

Overall Mission: The US Fleet Activities Yokosuka base is the Navy’s main headquarters in Japan.

The base provides logistics, recreational, and administrative support to Naval units stationed in the country.

2. US Navy Base Fleet Activities: Sasebo

Overall Mission: This base works to “enable forward deployed US and ally forces while providing superior support to their families.”

Overall Mission: This base’s mission is to provide combat readiness to all units and tenants of the Western Pacific.

4. US Navy Base Misawa Air and Submarine Patrol

Overall Mission: This Navy base works in conjunction with the US Air Force to provide support to deployed units in and around Japan, as well as to provide a challenging, rewarding, and culturally rich experience to all who serve there.

Overall Mission: This is a port base, and it serves as the main departure site for utility landing craft and air-cushioned landing vehicles to leave Japan with troops, vehicles, or supplies. They also respond to humanitarian, disaster relief, and combat needs. 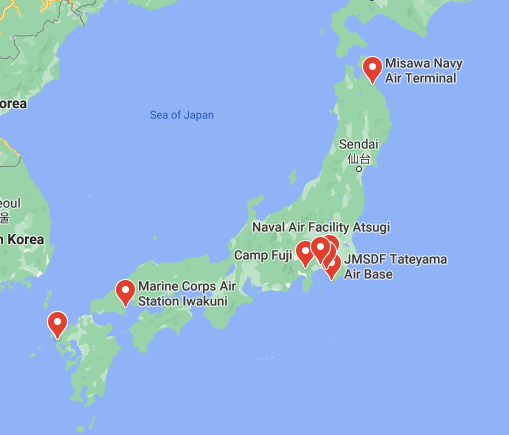 Japan is home to 5 major US Navy bases. Learn more about each base, including where it's located, units stationed there, when it was founded, and more.