Marines receive training to ensure they are elite soldiers capable of fighting enemies by land, sea, and air. To ensure Marines are combat-ready at all times, it is necessary to complete a Marine CFT (Combat Fitness Test) on a regular basis.

The Combat Fitness Test is a vital instrument used to evaluate Marines and their physical fitness.

Also, the score is tied to a Marine’s promotion potential and has a lasting impact on a Marine’s career.

What is the Marine Combat Fitness Test (CFT)?

What is the Marine Combat Fitness Test (CFT)?

The Marine Combat Fitness Test is a scored test.

Every six months, Marines engage in the Marine Combat Fitness Test on base.

Also, it is important to note this test is different than the Marine Corps Physical Fitness Test (PFT).

The design of this test ensures Marines are ready to face the physical demands of combat situations.

Therefore, there are three events Marines must complete to ensure they are combat-ready.

The events occur in a particular order that cannot be changed.

Also, the events must happen in a single event and in under two hours.

However, there are rest points between events for hydration and recovery.

The rest times recently decreased from five minutes to only three.

There are three events in the CFT. These include:

Soldiers run this event while dressed as quickly as possible.

How to Perform the 88-Yard Run

The 880-yard run is performed by running in combat boots and camouflage Battle Dress Uniform (BDU) pants and a tee shirt.

It takes two laps around a track to meet the 880 yards, and it simulates what it is like to run in combat while dressed in BDUs.

Soldiers run this event on level ground that is free from debris.

There are no sharp turns in this event, so Marines do not lose time.

Scoring for this event is based on gender and age.

Points are deducted every two seconds below the time related to a perfect score.

Getting Ready for the Marine CFT 880-Yard Run

Preparing for this event revolves around increasing speed and endurance while running.

The event is high-powered but relatively short in length.

Therefore, work to a higher speed by building fartleks into your runs. (yes, this is an actual thing)

When your run, take two minutes at a time running faster than usual before falling back into your normal speed for four minutes.

Repeat these intervals throughout your run.

The second event is the ammo can lift that simulates lifting heavy items overhead during combat.

How to Perform Ammo Can Lifts

When performing the ammo can lift, you will have two minutes to complete as many as possible.

You begin this event with the ammo can at shoulder height and press the can over your head with both hands on the ammo can.

The proper stance is with the head up, and chest elevated.

Your feet should stay shoulder-width apart or staggered in a warrior stance.

When the ammo can is highest, the elbows should briefly lock before returning to the start position.

Scoring the Ammo Can Lifts

The ammo can lift count as a repetition every time the ammo can correctly reaches the highest point.

Also, the repletion will not count if the move down to the start position is uncontrolled or the ammo can drops to the ground.

Points are deducted for every ammo can lift under 60.

The best way to prepare is by actually doing ammo can lifts until you can meet the expectations.

However, you can build and maintain the strength necessary with barbells and dumbbells in your fitness routine.

Also, work in speed sets of ammo can lifts to increase your endurance.

The Maneuver Under Fire (MANUF) event happens on a smooth surface and is a shuttle run with many different tasks related to common combat movements.

How to Perform the Maneuver Under Fire

There are four legs to the MANUF.

All four legs are each 100 yards in length.

You begin in the prone position, and when told, you get up and sprint for 25 yards.

Next, you drop to the prone position again before high crawling for ten yards, and then a modified high crawl for another 15 yards.

Next, you perform a diagonal run while moving around flags and other obstacles.

The last part of this leg is a casualty drag.

The second leg continues with a casualty drag and turns into a fireman’s carry through the rest of the second leg.

The third leg begins with an ammo can carry through various obstacles and conditions, and ends with a grenade throw and performing push-ups.

The final leg of this event continues the ammo can journey until you reach the finish line.

The scores are calculated based on gender, age, and time to complete.

Points are reduced for every two seconds up to the longest allowed time of five minutes and 59 seconds.

Getting Ready for Maneuver Under Fire

The MANUF event is a physically demanding event that includes all large and small muscle groups.

The best way to prepare is to continually engage in a well-rounded workout plan that addresses both speed, endurance, and strength.

We’re in the process of building a calculator for both the Marine CFT and PFT.  We’ll update this section with a link to it as soon as it’s ready!

We address common questions related to the Marine CFT below.

A perfect score is challenging for the CFT.

However, a perfect score for all three events is 100 points each.

The scale for earning points depends on your age and gender.

What is a failing CFT score?

A failing Marine CFT score is one below 150.

What happens if you fail the Marine CFT?

If you fail the Marine CFT, you may retake the test.

However, there are still consequences.

The failed test remains a part of your fitness record even if you pass subsequent CFTs.

How often do you need to take the USMC CFT?

The Marine CFT is rigorous and Marines take this test every six months to ensure they remain combat-ready at all times.

How much does the ammo can weight in the CFT?

Related Article – How to Prepare for the USMC Swim Qual

The Marines are elite soldiers who must maintain the ability to handle combat by land, sea, and air.

To ensure all soldiers are ready, the Marines conduct a Combat Fitness Test (CFT) every six months.

This test ensures soldiers can perform in combat situations.

There are three events in the CFT.

The design of all three events simulates movements and actions a soldier is likely to see during combat.

Currently, to past the CFT, a soldier must perform better than the minimum in at least one event.

The events include an 880-yard run, ammo can lift event, and a maneuver under fire event.

There are ways to prepare for the CFT, but the best preparation is to have an ongoing commitment to a well-rounded fitness routine.

4 Steps For Visiting A Marine Corps Recruiter Near You 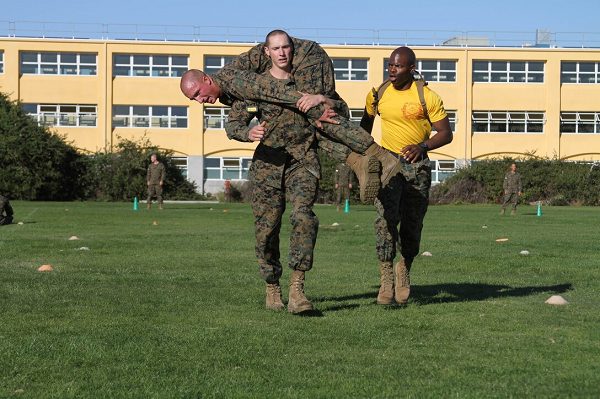 The Marine Corp Combat Fitness Test, or CFT, is a test designed to evaluate Marines and their physical fitness. Learn more about the Marine CFT, including the test standards, scoring, and more.