Each base in Kansas serves a different purpose, from Infantry training to Military Police work to supporting branch missions.

Each base also has a rich history behind it, with some bases starting as early as the mid-1800s.

Below is a brief rundown of each of the five military bases in Kansas. If you’d like to learn more about any specific base, feel free to follow the link to its official site (also provided below).

Each of the three Air Force bases in Kansas belongs to the Air National Guard:

Overall Mission: This base focuses on in-flight refueling not only for Air Force units, but also for all US military and US allied nation aircraft when needed.

They also train to carry and provide cargo, medical equipment, and personnel to units in mission.

Their aircraft is the KC-135 Stratotanker.

Overall Mission: This base focuses mainly on “Intelligence, Surveillance, and Reconnaissance.”

They also perform ground support and cyber systems missions to protect and defend the US.

Overall Mission: This is an Air Support Operation base, with a heavy focus on weather and meteorological forecasting to support US Air Force flights in the area.

They plan, control, coordinate, and request aircraft operations and missions with the knowledge they find.

They also have a special operations team that performs tactical air control.

Overall Mission: This large, historic base serve a multitude of missions. It is home to an Active Duty Military Police Brigade as well as a National Guard Infantry Division.

It also hosts many essential Army centers and offices, including the Military Corrections Complex which holds the US Disciplinary Barracks (the only military personnel maximum security prison).

Overall Mission: This base is home to the historic 1st Infantry Division, also known as “The Big Red One,” which has been serving for over 100 years.

It also serves as a training location for members of the Kansas National Guard and Army Reserve.

The base’s main goal is to deliver and support readiness in each of these units. 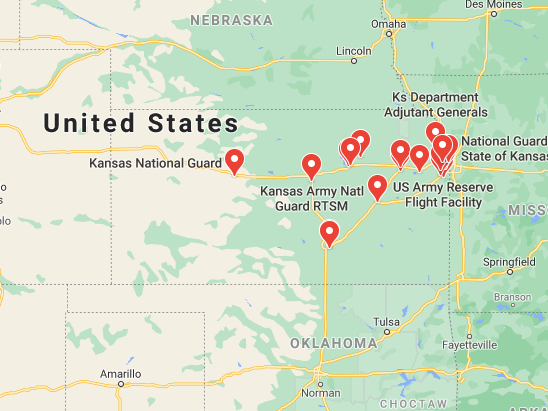 Kansas is home to 5 major US military installations. Learn more about each military base in KS, including its location, overall mission, and more.