The majority of the bases are operated by the US Army, but the Marines and USAF also have bases in the country.

See a list of every US Military Base in Germany below, including info on its location, how long it’s been in use, its overall mission, and more.

US Air Force Bases In Germany

Overall Mission: Ramstein Air Force Base is the headquarters for USAF operations in Europe and Africa.

Nato Allied Air Command also operates out of Ramstein AFB, and is considered the largest US military base in Germany.

Overall Mission: Spangdahlem Air Base is a NATO Air Base with the USAF as the major tenant.

The base’s primary unit is the 52nd fighter wing, which specializes in the suppression of enemy air defenses.

US Army Bases In Germany

Overall Mission: First Built by the Luftwaffe in 1935, the USAF took over operation of the base in 1945 and turned control over to the US Army in 1947.

USAG Ansbach and the attached Katterbach Kaserne base played a significant role during the Cold War, but operations have since been scaled back.

The base currently houses Aviation regiments of the US Army.

Overall Mission: USAG Baumholder is the site of the largest concentration of US Army personnel outside of the United States.

The base is also a major training site for NATO forces.

With the construction of a similar, but more advanced facility in Wiesbaden, Dagger Complex was downgraded to a data center, and is scheduled to be closed in the coming years.

It is also the central operating point for several smaller facilities in the surrounding area.

Overall Mission: Grafenwoehr is currently the central command for the US Army Garrison in Bavaria.

They provide support operations for the other garrisons throughout the regions.

They also oversee training activities for the surrounding garrisons.

At over 223 square kilometers in size, it’s also considered the largest US Army base in Germany.

Overall Mission: USAG Hohenfels is a subordinate garrison of the Grafenwoehr Bavaria Garrison.

Hohenfels is the site of major training exercises, including force on force combined arms training.

Overall Mission: USAG Kaiserslautern is currently in standby mode, and so is not involved in any active operations.

It has most recently been one of several staging areas for operations in the Middle East.

It performs support functions for other bases in the area, and is considered the smallest US military base in Germany.

It has also been the headquarters of EUCOM and Special Operations Command in Europe since 1967.

The base also contains the Panzer Kaserne Marine Base, as well as elements of the US Navy.

Overall Mission: More commonly called Clay Kaserne, this base is the US Army Europe Headquarters.

The base previously hosted Lindsey Air Station and retains elements of an airfield to this day.

This US Military base in Germany has elements stationed on the base to support the core mission.

Most notably, those elements are tasked with providing aircraft and aircrews for the core mission. 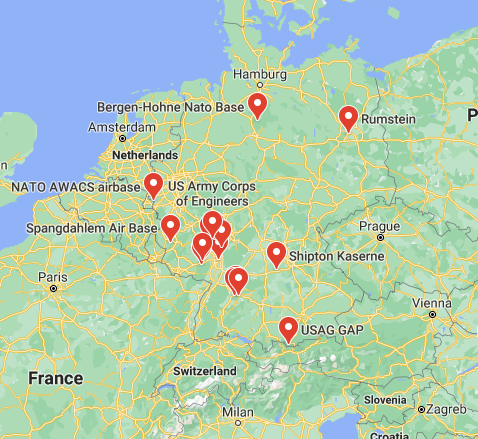 US Military Bases In Germany

Germany is home to 12 major US military bases. Learn more about each base, including where it's located, how long it's been in use, and more.