A United States Navy Aviation Ordnanceman (AO) are enlisted sailors that serve as aircraft armament (weapons) specialists charged with the servicing, handling, storing and inspection of all types of weapons and ammunition carried on Navy aircraft.

It is the AO that the Navy trusts and counts on to inspect, maintain and repair aircraft mechanical and electrical armament/ordnance systems.

In addition, ordies, as they are often called, service missile, bomb, and rocket releasing and launching devices.

Although the Aviation Ordnanceman was not officially established as a rating by the Navy until 1926, it actually began over a decade prior.

This is when in 1915, the Navy sent a Chief Turret Captain, a Chief Gunners Mate, and several other mechanics to Pensacola, Florida to work on what would be the beginning of aircraft armament and ordnance systems.

Just four years prior the Navy took possession of its first aircraft, a Curtiss Triad (Hydroplane).

Navy ordies take pride in their motto IYAOYAS (If You Ain’t Ordnance, You Ain’t Sh*t).

Approximately 8,300 men and women work as Aviation Ordnanceman in the Navy today.

To become an Aviation Ordnanceman in today’s Navy, there are specific requirements and qualifications to meet:

Prior to becoming an Aviation Ordanceman in the Navy, you must first become a Sailor. Recruits accomplish this via successful completion of Navy Recruit Training, commonly referred to as Boot Camp.

RTC Great Lakes is commonly referred to as “The Quarterdeck of the Navy.”

During these eight weeks, the Navy will teach you the basic skills required of all US Sailors.

Aviation Ordnanceman Navy A School is nine weeks long and is comprised of group instruction, classroom, and shop.

After completion of their core “A” school, AOs will also attend either a three-week airwing strand course or a two-week ship’s company strand course depending on the type of duty station they are initially assigned (ship duty or shore duty).

They should also pursue warfare qualifications depending on their duty station, such as:

The Navy provides online training to qualified AOs through their Credentialing Opportunities On-Line website, referred to as Navy COOL.

Additional training, such as Aviation Ordnanceman Class “C” schools are available to AOs as their Navy career progresses.

How Much Are Navy Aviation Ordnanceman Paid?

The Navy’s Rating Information Card describes the AO rate as:

“Aviation Ordnanceman are aircraft armament (weapons) specialists in charge of storing, servicing, inspecting and handling of all types of weapons and ammunition carried on Navy aircraft.”

Specifically, what an AO in the Navy does is:

AOs work ashore in hangars, on flight lines at air stations, in shops under various environmental conditions, or at sea on flight decks.

The work is often physical in nature and requires little supervision.

Aviation Ordnanceman 2nd Class (AO2) Adoni Hughes serves aboard the aircraft carrier USS George Washington (CVN 73) along with over 5,000 shipmates (3,200 in ship’s crew and 2,500 in the air wing).

AO2 Hughes loves and thrives at his job.

He was recently meritoriously promoted to petty officer second class.

“It was a stepping stone for my career.  I didn’t expect it and it came out of nowhere. It shows that people saw my hard work.”

“Serving in the Navy gives me more value,” adds AO2 Hughes. “I am doing something more with my time.”

“Serving in the Navy means I am giving back in some sort of way to my community and anyone else out there that may need help.

I am doing something to better the country.”

AO2 LeGrande on shore duty with Strike Fighter Squadron (VFA) 106, operating out of Naval Air Station (NAS) Oceana, Virginia, is thriving in his career with the Navy.

“I’m responsible for the safety of the evolution. You need to be a petty officer second class or above.

I also have three Navy and Marine Corps Achievement Medals.

One was for an inspection that we scored really well. It all means something.”

Sailors in specific jobs (or rates as the Navy refers to them) must adhere to a Sea/Shore rotation based on their rate.

The AO rate is a sea-intensive rate.

During a twenty-year career in the Navy, an AO will spend about 60 percent of their career at sea, and 40 percent assigned to shore stations.

Specifically, the Sea/Shore rotation for an AO is:

Note that some overseas assignments count as sea tours.

Shipboard life and life on shore duty are drastically different.

The Navy expects AOs, as they do all their sailors, to adapt and meet the challenges presented by these different environments.

Here are a few reviews we happened across on indeed.com from ex- and current Navy AOs:

AOs enjoy the same benefits as do all Navy personnel, such as the opportunity to travel the world, unlimited opportunities for learning and advancement, and control over their career.

Unfortunately, there are not many civilian career opportunities available for AOs doing the specific jobs that they did for the Navy.

Also, bear in mind that any sailor who has succeeded in the US military has great potential in the civilian sector.  The self-discipline, character, and confidence gained while serving your nation will carry you far in your civilian career, regardless of what you choose.

This is especially true if the sailor takes full advantage of on-the-job (OJT), training opportunities, and educational opportunities offered and afforded them during their naval service.

According to cool.navy.mil, these apprenticeships include:

If you are considering the US Navy, not averse to hard work or long sea deployments, enjoy being physically fit and competent with tools, equipment, and machinery, and are seeking adventure, Aviation Ordnanceman might just be the rate for you. 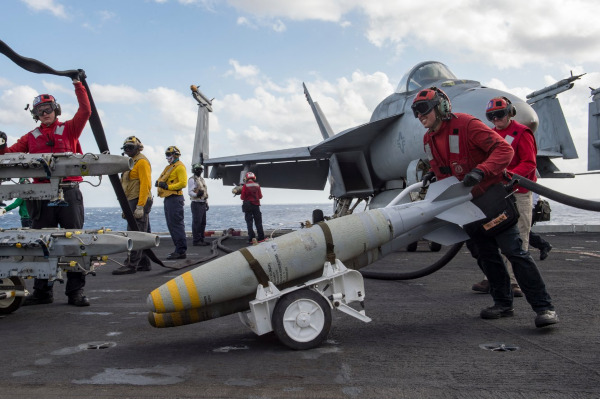 Learn more about what an aviation ordnanceman, or AO, in the US Navy does. Also includes details on the requirements, training, pay, and more.