Nevada is a wide open landscape with a lot of property utilized by the federal government for testing grounds.

As a result, there are a few military bases in Nevada you may find yourself stationed at during your time in service.

Las Vegas is the obvious choice for service members stationed at the following Nevada military bases:

Vegas is a reasonable drive for military families that prefer housing in the largest market the state has to offer.

“The Entertainment Capital of the World” offers plenty of amenities and attractions.

Meanwhile, the nearby suburb of Henderson, NV is an attractive family-friendly destination for military families.

The second largest city in Nevada is also the nearest in proximity to remote Indian Springs, NV, the site of Creech Air Force Base.

Creech AFB is one of two U.S. Air Force military bases in Nevada along with Nellis AFB.

Nellis AFB is associated with the nearby Nevada Test and Training Range (NTTR).

Nevada BAH is distributed monthly and determined by 3 key factors:

As a result, Nevada BAH rates for Las Vegas (including Nellis AFB) are as follows:

Reno and Carson City provide a backdrop for military families seeking housing in the northwest portion of Nevada.

The region is not far from Lake Tahoe for a relaxing getaway when time allows for service members.

Reno (“The Biggest Litty City in the World”) offers reasonable housing for active-duty troops and veterans.

Meanwhile, nearby Carson City is another quality option for affordable housing in Nevada.

The U.S. military depot is the largest in the world and is designed strictly for ammunition storage.

The purpose of the storage is to have backup ammunition in the event of a serious, major conflict.

For this reason, Hawthorne Army Depot is only partially staffed during peacetime.

The depot is run by an independent contractor under an agreement with the government.

Nevada BAH rates for Reno grant service members with a monthly allowance designed to cover the costs of rent or a mortgage.

NAS Fallon is considered one of the finest air-to-air and air-to-ground training facilities in the U.S. Navy.

It’s an impressive reputation considering that the military branch leads the rest of the world in terms of naval combat.

The remote landscape utilizes hundreds of thousands of acres for bombing and electronic warfare firing ranges.

For this reason, some consider Reno as an alternative despite the commute.

Nevada BAH rates for Fallon, NV is intended to cover the costs of housing for active-duty troops:

Calculate Nevada BAH (Basic Allowance Housing) for other locations in the state. 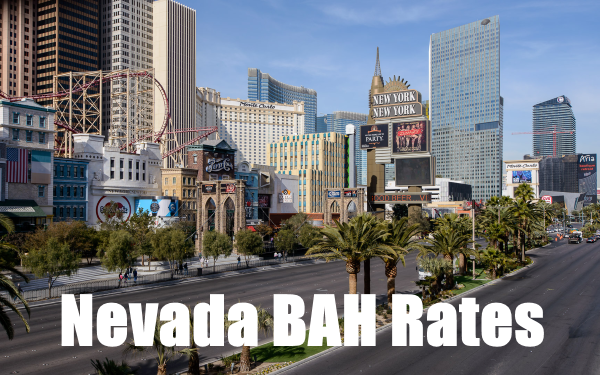