The monthly stipend is determined based on location, military rank, and dependents (if applicable).

Are you looking for affordable housing in Chicago, St. Clair, or Rock Island, IL?

Review Illinois BAH rates for military-friendly destinations in the state.

Chicago is the third largest city in the country.

As a result, the city (along with the surrounding metropolitan area) features a plethora of housing options.

However, finding something affordable is often another struggle in Chicago, IL.

Regardless, the city is a wonderful place to reside if you can find the right fit for your needs.

Additionally, the Chicago metropolis is your top destination for troops stationed at Naval Station Great Lakes (more information, below).

Moreover, it’s the largest training facility operated by the U.S. Navy in the country.

The massive complex consists of thousands of builders situated across 1,628 acres of space.

Accordingly, “The Quarterdeck of the Navy” functions as its own city with police, fire, and public works departments.

There are housing opportunities both on and off the military installation.

For those considering housing directly on base at Naval Station Great Lakes, here are the 2022 Illinois BAH rates:

BAH For Scott Air Force Base

Scott AFB is an iconic military base in Illinois with origins that date back to World War I.

Scott Air Force Base is the headquarters of Air Mobility Command (AMC) and U.S. Transportation Command.

Scott Air Force Base is sizeable as it employs over 13,000 active-duty troops and civilians.

For this reason, both military and commercial flights and operations take place on the military establishment.

The historic land borders the Mississippi River and is not far from St. Louis – Missouri/Illinois metroplex.

Illinois BAH stipends for Scott AFB and St. Clair County residents are for 2022:

The U.S. Army utilizes the secluded island for the site of its Rock Island Arsenal.

The facility (which dates back to the 1880s) manufacturers military equipment and ordnance for the government.

Those stationed at Arsenal Island or employed by the government rely on nearby Rock Island, IL.

The small community is very military-friendly with a population of less than 40,000.

On the other hand, service members may discover housing in neighboring Moline and East Moline.

Meanwhile, cities in Iowa (like Davenport and Bettendorf) are within a very reasonable drive from the military base in Illinois.

The Illinois BAH for Rock Island, IL is as follows:

Illinois Prep Military Schools are abundant in the state. Check out our review, here. 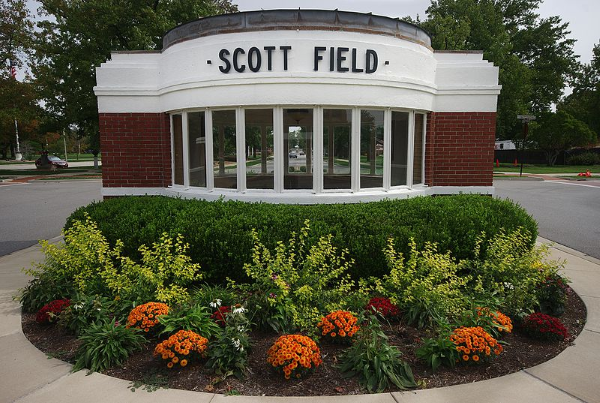 The military provides Illinois BAH to service members stationed in the state. The allowance assists with rising housing costs.