The monthly stipend is appreciated by service members and military dependents that are faced with rising competition and costs.

Are you looking to relocate to South Carolina due to a new assignment?

The community is noteworthy for several reasons including its proximity to Charleston Harbor.

For this reason, Charleston is very military-friendly due to several military bases being in the area:

The military installation is operated by the U.S. Navy and exists on the Cooper River.

Goose Creek and Hanahan are other housing options for military personnel seeking a quieter way of life.

Meanwhile, housing is available directly on base at NAS Charleston.

Joint Base Charleston supports operations for both the U.S. Air Force and U.S. Navy.

Furthermore, the United States Coast Guard manages a military complex in the region.

The South Carolina BAH rates for Charleston are determined based on rank and dependents (if applicable):

Learn more about the military bases in South Carolina.

Here are the South Carolina BAH rates for Beaufort and Parris Island:

Columbia – the capital of South Carolina – also provides a lot of housing opportunities for military families.

Military dependents value access to top-notch education including the University of South Carolina.

There is no question that Columbia, SC has benefited from the military including two prominent installations in the area:

Fort Jackson is a legendary U.S. Army post that dates back to the start of WWI.

It’s the largest military base in the country to conduct Basic Combat Training (BCT).

As a result, the U.S. Army reports that Fort Jackson processes 35,000 recruits each year.

The U.S. Army 165th and 193rd Infantry Brigades supervise training at the complex.

BAH For Shaw Air Force Base

The Air Force base is one of the largest in the country and supports the 20th Fighter Wing.

Shaw AFB is under the jurisdiction of the U.S. Air Force Air Combat Command (ACC).

Therefore, here are the most recent Illinois BAH rates for Sumter, SC: 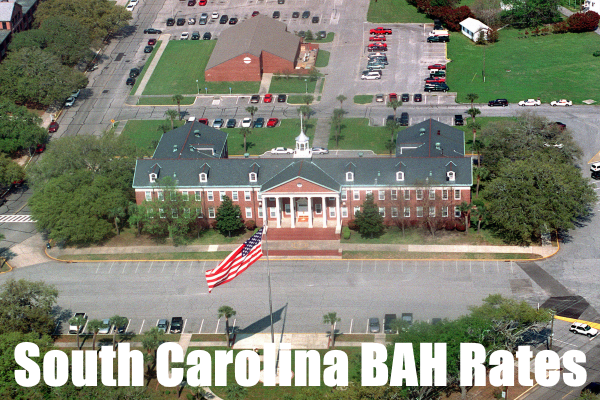