There are few choices in life as significant and monumental as your decision to join the military.

While most service members prefer to enlist after high school or college, there are many that join later in life.

There are many advantages to enlisting early in the military, especially when it comes to meeting physical fitness and weight requirements.

However, joining the military at 30 also provides several benefits as you’ll be far more mature, disciplined, and mentally prepared.

Are you considering joining the military at 30?

Here’s how to do it…

Which Branches of the Military Can I Join at 30?

It is natural to think of most new recruits as young faces that are fresh out of high school or college.

However, some service members prefer to wait until later in life to serve their country.

Whether pursuing the military is a newly founded goal or something you have considered for years, there are pros and cons to joining in your 30s.

Members of the military that begin serving later in life are generally more mature and prepared for service.

In fact, you can join the military as late as the age of 42 though some branches have different requirements.

Here are the age limits for active-duty service members:

As you can see, the U.S. Coast Guard and Marine Corps have the strictest enlistment standards in relation to age.

Meanwhile, the U.S. Army and National Guard accommodate the oldest members with a cutoff at the age of 42.

The Air Force will surprisingly admit new recruits into their late 30s.

On the other hand, the reserves offer more leeway in terms of age:

If you fail to qualify for a particular branch or special forces because of age, you may request a waiver.

Those that apply for a waiver in a non-combat position (medical, legal, dental, etc.) are more likely to receive approval compared to combat roles.

Related Article – Military Age Limits: Do You Meet The Cutoff?

Benefits of Joining The Military At 30

The military is more appropriate for younger people as most recruits enlist after graduating from high school or in their early 20s.

Nonetheless, some recruits arrive at boot camp in their 30s or early 40s.

What are the benefits of joining the military at 30?

In general, older recruits pursue the military for the same benefits as someone half their age.

The U.S. Armed Forces is a terrific organization to consider joining if you want a steady paycheck, dependable benefits, as well as the opportunity to meet new people and see the world.

Moreover, the military is exceptional at building character and teaching discipline which can help you in any avenue you pursue.

Service members train for a variety of professions and additional financial aid is available to those that want to pursue a college degree before or after serving their country.

These benefits are often more appreciated by service members in their 30s since they’ve already had real-world experience.

Consequently, joining the military at 30 may help you expand on job skills and training you already have, or introduce you to a brand new profession.

While pay rates are average compared to the private sector, military benefits are comprehensive and worthwhile.

The military can assist you and your family with healthcare, housing, food, and education.

Fathers and mothers often join the military in their 30s to help support their families.

The Military Spouse Preference Program is an outstanding offering for your significant other, while military child care and scholarship opportunities help cover critical expenses.

Lastly, joining the military at 30 is an enticing opportunity for middle-aged females that may have not had the same opportunity fresh out of high school.

Females are now eligible to join every branch of the military as long as they meet requirements.

As a result, the U.S. Armed Forces is starting to see more older women join the military even if it comes with additional challenges for the female.

Downsides of Joining the Military at 30

Life is a drag which is why more and more adults look to radically change their life after being out in the real-world for a considerable amount of time.

The idea of joining the military at 30 may sound tempting, but before you do anything rash make sure you also consider the disadvantages.

The first and most obvious concern for older adults that join the military is physical fitness.

It’s not impossible to meet military physical fitness standards in your 30s, just make sure you are prepared to put in a little extra effort.

Additionally, older adults need to consider what they are leaving behind if they enlist.

Many adults in their 30s are already parents or have an established family.

Leaving Behind Family – The Ultimate Sacrifice

While serving the military will entitle you to outstanding benefits that provide housing, food, and healthcare to your family – it also means that you’ll see them way less.

It can especially be hard on young parents who are going to miss out on several key life events because of service obligations.

Females encounter additional downsides as it might force a partner to put pregnancy on hold or avoid having children altogether.

Since most of the drawbacks are related to family, you need to make sure you have a supportive partner to help make the process easier.

Lastly, you’ll likely earn less working for the government compared to the private sector which means many adults joining the military at 30 take a substantial pay cut.

Joining the Military with a College Degree

It benefits you to join the military with a college degree.

Recruits that already have a college degree have several advantages over recruits with just a high school diploma or GED.

First, you’ll likely begin your military career at a higher rank compared to recruits that lack a college degree.

A higher rank not only grants you more power and prestige but also guarantees a higher wage and benefits.

Additionally, recruits with a college degree are far more likely to advance in military rank quicker.

In fact, it is possible to begin your military career with the ranking of an officer with a college degree.

Joining the military with a college degree also gives you more control over your destiny.

For example, you generally qualify for more military occupations and can further your education through the GI Bill.

Joining the military at 30 is an exciting way to become a doctor or lawyer while having most or all of your education expenses covered by Uncle Sam.

Thus, you don’t have to stop with just a bachelor’s degree as many enter service later in life to pursue a master’s degree or Ph.D.

The only real downside to joining the military with a college degree is you’ll likely earn less compared to people doing the same job in the civilian world.

How to join the military at 30 years old?

There are two ways to join the military at 30, with or without a college degree.

First, you need to make sure that you qualify for the military branch you seek to join based on age.

The age cutoff is far younger for active-duty members of the U.S. Coast Guard and Marine Corps compared to the Army and Air Force.

Secondly, make sure that you meet all other eligibility criteria for the military branch.

Thirdly, you should consider meeting with a military recruiter before you get too deep in the process.

The military recruiter can help answer any questions or concerns, but make sure you aren’t pressured into making a decision at that appointment.

Considering enlisting in the U.S. Armed Forces takes time and feedback from family and friends, especially for older adults.

Steps to Joining the Military at 30

There are two ways for joining the military at 30.

You may enlist in a qualifying branch A) with or without a degree as an enlisted soldier or B) as an officer.

Recruits that already have a bachelor’s degree yet still prefer to join as enlisted automatically start with the ranking of E-4.

The starting salary for most E-4 military jobs is approximately $2,200 per month.

However, you can earn a higher salary by considering joining the military at 30 as an officer.

The opportunity is only available to college graduates.

Additionally, you’ll need to make it through boot camp just like every other enlisted recruit.

Joining the military at 30 as an officer provides one significant advantage – pay.

Enlisting in the Military

Here are the steps you need to complete to join the military at 30:

You are making a mistake if you think it’s too late to enlist in the military.

Most military branches allow citizens to join into their 30s and early 40s.

Therefore, it’s not too late to make a major lifestyle change if you want to join the military at 30.

There are advantages and disadvantages to joining the military at 30, especially if you already have a spouse or family.

Nonetheless, serving the country is one of the most rewarding honors you can seek, and doing so later in life has additional significance. 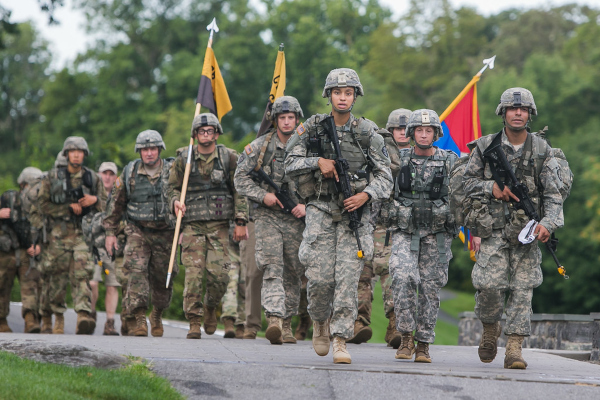 Can you join the military at 30 years old? Absolutely! Find out which branches you can join at age 30 and above, as well as the age limits for each.