There are a total of 18 US military bases in Iraq.

There are 6 US Army bases and 6 US Air Force bases, along with five joint bases.

The US Marines, Navy, and Coast Guard do not have bases in Iraq, learn more about each base below.

US Army Bases In Iraq

Overall Mission: FOB Abu Ghraib was used as a detention facility during the Iraq War from 2003 to 2006.

Military police were stationed at the base at the time of its opening.

It has since been handed over to the Iraqi government and had re-opened as the Baghdad Central Prison in 2009.

Overall Mission: Camp Fallujah was a major Army installation that had also housed US Marine Units.

This base played a huge role in some of the major missions during the US military’s presence in Iraq.

Units taking part in Operation Phantom Fury and Operation Vigilant Resolve were based at Camp Fallujah at the time.

Overall Mission: FOB Grizzly was the base for a number of Army Police Battalions during the years of its operation.

The MP units were responsible for security forces and handling prisoners of war.

This also was located near Camp Ashraf.

Overall Mission: Camp Justice served as a detention facility for prisoners of war.

The base is famous for the execution of Saddam Hussein and other key figures within his regime.

The base had also supported other American interests during Operation Enduring Freedom.

Overall Mission: FOB Sykes was opened as a strategic base for aircraft operations during the Iraq War.

The base was located in an area of Iraq where there were a high number of insurgents battling against US and Allied forces.

Overall Mission:  The base served as a major hub for US forces.

It has also served as the site for many USO shows during the Iraq War and the occupation of US troops that were being deployed.

Overall Mission:  After the closure of the Abu Ghraib prison facility, Camp Bucca was used to house prisoners of war and detained terror suspects.

The facility was known for holding various militant members of Al Qaeda and the late Abu Bakr al-Baghdadi, who would eventually become the leader of the Islamic State and Levant (aka ISIS).

Overall Mission: COP Shocker was a strategic base located near the Iranian border.

It was believed that the base was formed as a deterrent to any potential involvement by Iran.

Despite no known involvement by the neighboring country, it has served as one of the many support bases for US forces in Iraq.

Overall Mission: Originally built by forces loyal to Saddam Hussein, US forces took over the base early on during their occupation of Iraq.

Soon after the takeover, multiple units were stationed in and out of the base.

Located in the Sunni Triangle of Iraq, it was considered one of the handfuls of strategic bases to ward off insurgents that were hostile to the United States and allied forces.

Overall Mission: Joint Base Balad was yet another strategic base that was built during the Saddam Hussein regime with the intent to keep foreign invaders out.

During the US occupation, Balad was a “must capture” base to ensure that the military had a strategic edge against enemy combatants.

The base was under US Army command until it integrated with the United States Air Force in 2008 to conduct both ground and air missions in Iraq.

Overall Mission:  The Victory Base complex consisted of ten bases located near the Baghdad International Airport.

The complex consisted of a number of FOBs, Air Bases, and Army Camps.

This was the nucleus of US operations during the occupation in Iraq.

US Air Force Bases In Iraq

Overall Mission: The United States took over the air base in 2001 as a strategic base in the war against the Taliban and Al Qaeda forces led by Osama bin Laden.

As of today, it still remains in United States control as it continues to provide air support for military missions for US and NATO forces.

The base also contains a medical facility along with a detention camp for prisoners of war and suspected terrorists.

Overall Mission: As part of Joint Base Balad, the air base provided aviation support for United States forces

It’s strategic placement is due to the high volume of mortar attacks that occur in and around the vicinity of Balad on a regular basis.

It also served as a logistical hub for US and later Iraqi forces.

Overall Mission: The base was formerly owned by the Royal Air Force.

It became a hub for military assets of both the United States and the New Iraqi Army as it conducted missions in and around Fallujah and Ramadi.

It had also served as a major US-ran training facility for Iraqi military forces.

Overall Mission: At the outset, the air base was secured by Australian forces and later handed over to the Americans in late 2003.

The base was used to house trucks that provided fuel and supplies to military forces.

Most of the major fuel routes were considered dangerous and under constant attack.

US forces had withdrawn in 2011 only to return three years later in their conflict with ISIS.

Overall Mission: The air base housed various units that provided air support along with local outreach, search and assistant, and safety patrols among other tasks.

Some of the units have also provided security for important archaeological dig sites to deter looters.

In the fight against ISIS, the United States Air Force used the base from 2016 to 2020 (the base had previously been under the former’s control until 2014).

Overall Mission: Harir Air Base was located in the Kurdistan province of Iraq.

This was located in close proximity of Incirlik Air Base in Turkey and was a likely replacement in the event of a potential closure by the Turkish government.

The base was frequently used in the battle against ISIS and other terror groups based in Iraq. 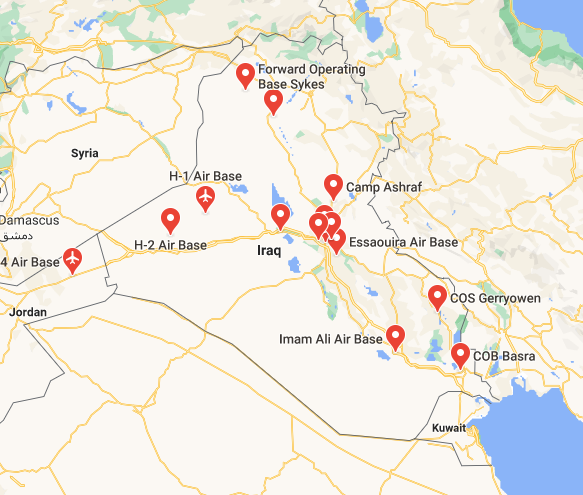 US Military Bases In Iraq

The US military has a total of 18 major bases in Iraq. Learn more about each base, which includes bases for the US Army and US Air Force.