The United States Marine Corps operates its own infantry unit with an outstanding reputation.

Marine Infantry (Field 03) is the backbone of the military branch with a primary goal of seizing and controlling terrain.

Regardless of the MOS, Marines serve the country attacking and defeating enemy forces.

Read the complete Marine Infantry Guide for more information on the job field and related specialties.

What is the Marine Infantry?

What is the Marine Infantry?

The infantry units serve as ground forces that are capable of locating, converging, and destroying enemy forces.

Marine Infantry may secure and defend terrain by repelling an enemy assault by fire, maneuver, and close combat.

The Infantry division trains amphibious warriors that have the ability to deliver versatile warfare in chaotic and uncertain conditions.

Marines employ a variety of weapons and systems to complete a mission.

Thanks to incredible training and support, Marines can fight in any climate or place, day or night.

Therefore, Marines utilize a full spectrum of combat with the ability to maneuver by foot or mounted trucks, assault vehicles, or vertical assault aircraft.

Marine Infantry warriors are part of one of the most highly trained and deadliest fighting forces on planet earth.

The infantry division is highly coveted by recruits from every military branch because of all the specialized training as well as prestige.

You’ll serve the country as a Combat Infantry Marine that uses hand-to-hand combat or acts as part of a fire team.

Marine Infantry provides combat roles designed to seize and occupy terrain which is needed to win battles, and therefore wars.

They receive highly specialized training to reach enemy terrain by way of the sea and assert their will on the battlefield.

As a result, Marine Infantry provides some of the best trained and elite combat personnel of any branch in the military.

Marines are traditionally the first on the scene and help pave the way for other support units.

There are several Marine Infantry jobs (Job Field 03) that you should consider pursuing:

Marine Rifleman MOS 0311 is one of the most common Marine Infantry positions in the Corps.

Marines typically start out as Rifleman before progressing to more advanced roles such as Scout or Recon.

Marine MOS 0311 represents the foundation of Infantry and the nucleus of the fire team.

Riverine Assault Craft is responsible for transporting Marines from ship to shore using a variety of small boat craft.

Therefore, Marine MOS 0312 either serves Infantry as a coxswain for the RRAC crewman or capable of handling onboard weapons systems.

The onboard weapons systems include powerful weapons such as the MK-19 Grenade Launcher and M2 Machine.

LAV Crewmen are responsible for the Ligh Armored Vehicle (LAV).

Marine MOS 0313 provides basic infantry skills as well as a variety of weaponry.

You may serve the team as vehicle operators or commanders of Ligh Armored Vehicles.

Marine Rigid Raiding Craft is a coxswain that is responsible for the safety and conduct of the boat team.

They provide safe operation, launch, recovery, and maintenance of the craft.

Marine Combat Rubber Reconnaissance Craft (CRRC) is responsible for the safety and conduct of a boat team.

The coxswain provides the safe operation, handling, launch, recovery, and maintenance of the CRRC craft.

It also deals with associated equipment, components, and SL-3 gear.

A Marine Scout Sniper is one of the more prestigious job titles within Occupation Field 03.

Scout Snipers are also capable of providing reconnaissance and surveillance operations for the infantry battalion.

They also need to have a minimum rank of Lance Corporal.

A Marine Reconnaissance Man is skilled in amphibious recon and ground recon.

They can scout, patrol, and produce long-range communications skills to assist with reconnaissance.

The Marine Corps presents advanced training as a static line and military freefall parachutists and jumpmasters under the job designation.

Marines may also train as combatant divers and diving supervisors.

Marine Recon with a parachute qualification fall under the Military Occupational Specialty MOS 0323.

Reconnaissance Man – Parachute Qualified is highly trained and skilled in amphibious as well as ground reconnaissance.

There is an extra emphasis on parachute jumping and landing in MOS 0323.

Reconnaissance Man – Combatant Diver Qualified is trained in the same amphibious and ground reconnaissance as MOS 0321 and MOS 0323.

Marine MOS 0324 specializes in diving as a means for executing specialized missions.

Marine MOS 0326 combines the best of both worlds with parachute and combatant diver qualifications.

They can utilize either parachuting or diving to execute recon missions for the Marine Corps.

They provide direct fire support for the infantry squad/platoon/company.

Marine MOS 0331 is a hard-working and challenging job specialty yet very rewarding.

Marine Mortarman (MOS 0341) is responsible for the tactical employment of the M224, 60mm Light Mortar and M252, and 81mm Medium Mortar.

Mortarmen offer indirect fire in support of the rifle and LAR squad/platoon/company.

A Marine Infantry Assaultman (MOS 0351) acts on the front line of any infantry assignment.

An Assaultman (MOS 0351) are considered “grunts” which is a term they honor and take very seriously.

However, Marines are more than just laborers as they use highly advanced weapons and are very well trained.

The Marine Corps continues to introduce some of the most sophisticated weapons systems in the world.

It takes special training and a team of experts to utilize anti-tank missiles on enemy targets.

Marine Anti-Tank Missilemen provide tactical employment of medium and heavy anti-armor fire in support of the infantry squad and platoon.

They carry out orders that get issued by the Platoon Commander.

Leaders are responsible for the welfare and discipline of the squad, equipment, and weapons to which they get assigned.

They execute missions in the elite levels of Special Ops and Counter-terrorism.

They are experts on reconnaissance and have earned a stellar reputation within Occ-Field 03 of the Marine Corps.

Marine Infantry has a series of requirements that recruits need to meet before qualifying for initial training.

The Marine Corps has basic requirements for admission, including physical fitness standards.

The series of tests determine what your strengths and weaknesses are through a written exam.

Marine Infantry candidates must score General Technical (GT): 80 or higher on the ASVAB.

Basic training (or boot camp) in the Marine Corps is 13 weeks and demanding.

You also need to attend and complete the School of Infantry (SOI).

Marine Corps School of Infantry is a physically and mentally demanding program.

You will complete the Marine Rifleman Course during your studies which include classroom learning and field training.

All in all, Marine SOI lasts nearly two months and challenges you while serving in an Infantry Training Battalion (ITB).

The goal is to complete Marine SOI by focusing on physical fitness and mental toughness.

Marine Infantry is not for everyone and requires a high degree of focus and commitment.

Your dedication and performance during recruit training can help you pave any career you wish to pursue in Marine Infantry.

The United States Marine Corps is organized within the Navy.

The U.S. Navy is led by the Secretary of the Navy (SECNAV).

A Commandant of the Marine Corps acts as the most senior commissioned officer in the military branch.

The Commandant of the Marine Corps is responsible for organizing, recruiting, training, and equipping the branch.

Secondly, the Marine Corps gets organized into four subdivisions:

The basic organization of Marine Infantry follows the “rule of threes”.

Consequently, it places three subordinates under a commander but that doesn’t count the support elements.

Here is the organization starting with the lowest member on the totem pole and working the way up the hierarchy:

Infantry battalions are the heart and soul of the Marine Corps ground combat element.

Marine infantry battalions are generally referred to as “grunts”.

The battalion is traditionally organized into three rifle companies, a weapons company, and a headquarters and service company.

Here is the complete list of active Marine infantry units:

Marine Infantry operates on the same pay scale as other divisions of the military.

Enlisted Marines are paid based on military rank and years of service:

Marine Officers receive pay based on the same criteria yet from a different pay scale:

Here are some frequently asked questions about Marine Infantry:

Yes, Marine Infantry acts as the front line of combat.

They are often the first to raid a foreign territory and seize control of the land.

The Marines will teach you all the skills and training you need to survive.

Regardless, all the MOS under Occ-Field 03 is dangerous because you do see combat.

Are all Marines considered infantry?

The short answer is yes and no.

There are Military Occupational Specialties (MOS) that are non-combat or non-infantry.

Regardless, it is the philosophy of the Marine Corps to train every recruit into a Rifleman.

So, you will receive combat training yet might not see any action during your duty.

How dangerous is infantry in the Marines?

Marine Infantry is dangerous because you are trained to see combat and usually represent the first point of attack.

There is the added danger of vertical envelopment and amphibious warfare which makes Marine Infantry arguably more dangerous than other military branches.

However, everyone that enlists in the Armed Forces (regardless of the branch) understands that some danger is involved with combat specialties.

Can females join infantry in the Marines?

As of 2016, all Marine MOS’s (including infantry MOS’) are open and available to women. With that said, there are a very small number who have actually done so (less than 100).

Is it hard to get infantry in the Marines?

The standards to become Marine Infantry are not extremely difficult.

However, the Marine Corps is often considered a more elite branch of the military because of the amphibious warfare tactics and the first line of response.

The School of Infantry (SOI) is more demanding compared to basic training yet with hard work and dedication you can advance.

A local Marine Corps recruiter can help you prepare for the infantry division before you arrive at SOI.

What’s a typical day in the life of a Marine Infantryman?

A typical day in the barracks starts early in the morning.

Marines wake up, shower, eat morning chow, and prepare for the day.

The School of Infantry (SOI) introduces you to the life of an Infantryman.

You will train during long days until you are sent out on an assignment.

Marine Infantry is the backbone of the military branch.

They assist in protecting the nation by attacking and seizing control of land during chaotic and uncertain conditions of conflict and crisis. 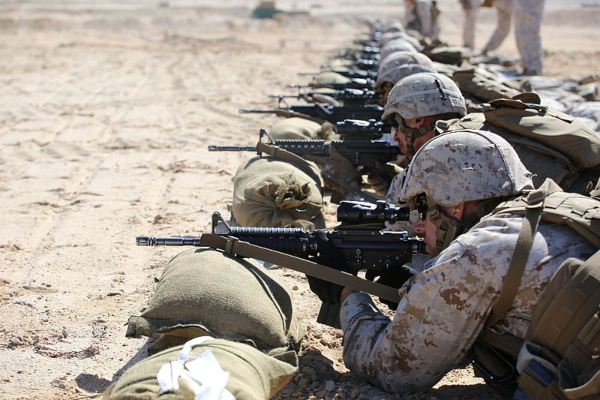 Learn more about Marine Infantry, including the various jobs in Infantry, the requirements to join, command structure, pay, and more.