Unfortunately, US Navy operations and missions do not always take place in ideal weather.

Those who fly Navy aircraft, navigate Navy ships, and direct Navy personnel on the ground always have to be aware of what’s happening weather-wise and with other pertinent atmospheric conditions.

Such things as adverse weather and high waves can impact the success of any Navy mission if those in charge are not prepared for it.

That’s what makes the job of being a Navy Aerographers Mate so important.

These part meteorologist and part oceanographer specialists help to keep commanders and other Navy personnel abreast of the current and forecasted weather and ocean conditions that they may face during operations or missions.

Here is what it takes to qualify to start training to become an enlisted Navy Aerographers Mate:

Training and Career Path to Become a Navy Aerographers Mate

Completion of these training steps is necessary in order for any Seaman to be able to properly perform the duties of a Navy Aerographers Mate.

The technical training Navy A School to become a Navy Aerographers Mate takes place at Keesler Air Force Base in Mississippi.

Training is done over a 19 week period.

During this training, a recruit will familiarize themselves with the equipment a Navy Aerographers Mate uses and learn how to read weather charts, interpret atmospheric data, and how to determine current ocean conditions.

Once Navy technical training is finished, the recruit will head to their first duty assignment for further on the job training in these same areas.

How Much Are US Navy Aerographers Mate Paid?

Most new US Navy Aerographers Mate will start out at the pay grade of Seaman Recruit (E-1).

Any recruit that has job applicable training or skills may start out as a Seaman Apprentice (E-2) or Seaman (E-3).

As with all military jobs, the pay is based on rank and time in service.

Here is the current paytable for Navy enlisted based on rank and time in service:

There are other forms of payment that may add to someone’s paycheck while they are serving their country in the Navy and some other nice benefits too.

This can best be described as a very important and comfortable Navy job.

Most do not consider this a high-stress position, although the information that Navy Aerographers Mates give to those it impacts must be as accurate as possible.

The recruit who fills this position will most likely be working from a very clean office-like setting.

A Navy Aerographers Mate work setting may be one where there is few other people work beside them or a much more busy work setting at a major command center.

The duties that a Navy Aerographers Mate is tasked with include:

There is some temporary duty travel associated with this type of Navy position and they do pull shipboard assignments too.

Those who are stationed stateside at bases will have plenty of time to spend with their families and doing extracurricular activities.

Here is a YouTube video that describes in more detail what a Navy Aerographers Mate does:

Here is what one current and one former Aerographer Mates had to say about their Navy job experience on the website Glassdoor.com: 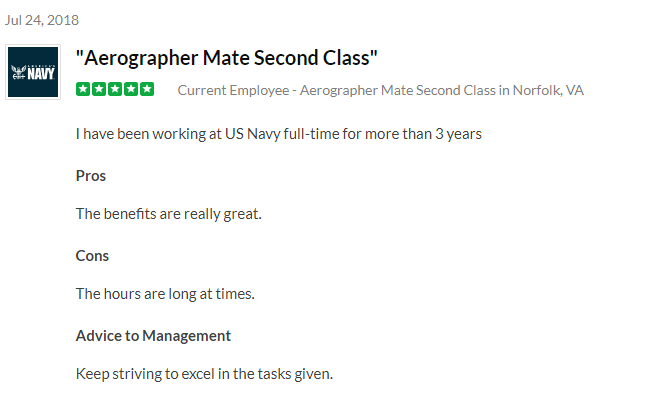 There is not a huge demand for former Navy Aerographers Mates in the civilian world.

Do not mistake that for meaning there are no jobs available for Ex-Navy Aerographers Mates who know their craft well.

There is always some need stateside for those that know how to forecast and interpret the weather.

For instance; a former Navy Aerographers Mate that has some public speaking experience can land a job as a TV or radio weather personality.

There are also positions that come open at the various weather centers across the country.

Most of these jobs will be in areas with larger populations.

There is also the possibility that an Ex-Navy Aerographers Mate can be employed based on the oceanography side of what they learned in the Navy.

There are even some government contracting jobs that will have former Navy Aerographers Mates performing similar jobs to what they did in the military.

Here are some examples of companies that have the need for the skills that former Navy Aerographers Mates possess:

The starting pay for many of these jobs is $50,000 + a year depending on experience.