The US military is one of the largest (if not the largest) employers in the United States.

Here at OMK, we’ve done the research and compiled a list of jobs for each branch of the military.

It isn’t practical for us to list every single one on this page, so what we did was break it down by branch.

Keep in mind that these military jobs are for enlisted personnel only, and are in no particular order.

List of all 24 Ratings in the US Coast Guard

Some Common Questions We Receive

How much do military jobs pay?

All jobs in the Army, Navy, Marine Corps, Air Force, and Coast Guard are paid the same, and are based on 2 factors:

2. Your length of service

See ranks are pay charts for each branch of the military below:

US Army Ranks and Pay

US Navy Ranks and Pay

US Air Force Ranks and Pay

US Marine Corps Ranks and Pay

US Coast Guard Ranks and Pay

What are the best jobs in the military?

There really is no ‘best’ job in the military.  The best job would be one that you both qualify for, and one that interests you.

Another consideration that should be taken includes what kind of job you’d like to have after your time in the military is up.

For some, this isn’t a very important consideration.

However, it’s actually one of the most important things you should be thinking about before joining the Army, Navy, Air Force, Marine Corps, or Coast Guard.

What military jobs are in high demand?

This depends drastically based on a number of factors, and changes pretty frequently.

Getting Started On Your Military Journey

If any of this sounds appealing to you, then the military might be right for you.

Check out some of our related articles below.

They’ll help you understand exactly what you’re getting yourself into, and hopefully answer any questions you might have along the way:

Which Branch Of The Military Should I Join?

20 Reasons To Join The Military (and 7 reasons not to)

How To Join The US Military As A Non-Citizen

Joining A Branch Of The Military

Army Recruiter Near You

Navy Recruiter Near You

Air Force Recruiter Near You

Marine Corps Recruiter Near You

Coast Guard Recruiter Near You 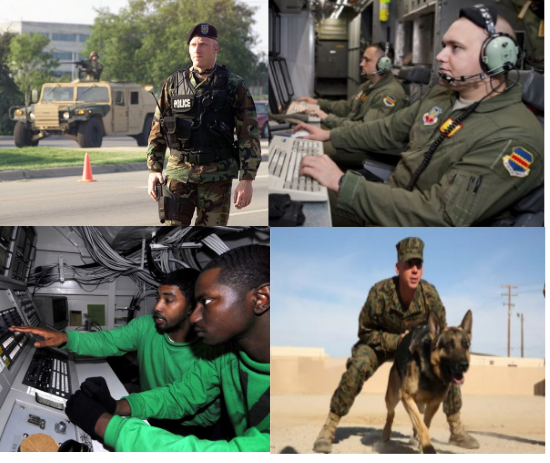 See a list of all 512 jobs in each branch of the military, including the US Army, Navy, Air Force, Marines, and Coast Guard.