There is both an operational and institutional side to the chain of Command.

Furthermore, the operational side covers the numbered armies, divisions, brigades, battalions, and corps.

Also, the institutional side of the Army supports the operational side.

The President of the United States (POTUS) is at the top of the Army Chain of Command.

Currently, President Joe Biden is the President of the United States.

The Secretary of Defense is a defense policymaker, and he oversees the Defense Department.

Lloyd J. Austin, a West Point graduate, is the current Secretary of Defense.

Secretary of the Army

The Secretary of the Army is a civilian with the Department of Defense responsible for everything related to the Army.

These responsibilities include personnel, weapon systems, the reserve units, and even financial management, to name only a few.

Currently, John E. Whitley is the acting Secretary of the Army.

The Chief of Staff of the Army is a position held by General James C. McConville.

This position is the highest-ranking offer in the Department of the Army, and the person in this position acts as an advisor to the Secretary of the Army.

Also, General James C. McConville is a member of the Joint Chiefs of Staff, making him an advisor to the National Security Council and the POTUS.

Sergeant Major of the Army

Currently, Michael A. Grinston is the Sergeant Major of the Army.

This position’s responsibilities include advocating for the needs of enlisted members of the Army.

Also, they serve as advisors to the Chief of Staff of the Army.

Under the umbrella of the Department of the Army are four Army Commands.

The Commanding General for FORCOM is General Michael X. Garrett.

FORCOM’s mission is to ensure soldiers are ready for combat and fully trained to meet expectations.

To ensure the mission, FORCOM prioritizes caring for soldiers, ensuring soldiers are ready for combat, and keeping the forces modern and up-to-date.

TRADOC is responsible for training and recruiting soldiers.

AMC has the unique responsibility of ensuring the supply chain is global and material is ready for the Army.

The AFC’s goal is to ensure the modernization of the United States Army.

There are also Army Service Component Commands under the Department of the Army.

Also, the mission of USARAF is to support and promote stability in the region.

The USARCENT handles the Middle East, Central Asia, and South Asia by providing oversight in the areas.

USARNORTH is responsible for both homeland defense and the support of civil authorities.

Also, USARSOUTH handles security and other activities and national Armies in Central and South America and the Caribbean.

USAREUR handles operations in the European and Africa Command.

Commanded by General Paul J. LaCamera, USARPAC prepares Army forces in the area and works to protect the region.

Also, there is a goal to work with allies in the region.

Furthermore, the USASOC works to sustain Special Operation Forces all over the world in all of its missions.

SDDC integrates global deployment and distribution for the Army and other branches of the military.

Also, this Command works with commercial transportation to ensure their mission.

The Army Space and Missile Defense’s mission is to develop and provide missile defense for the Army and allies.

Also, the USASMDC works with other military branches.

USARCYBER handles operations relating to cyberspace, electronic warfare, and anything related to information.

Also, each unit has a specific and unique mission.

ATEC is a Direct Reporting Unit that handles the testing, operating, evaluations, and experiments of all Army Equipment.

Furthermore, this DRU is in the continental U.S and Hawaii.

MDW is subordinate to the Northern Command, and it helps the Department of Defense support authorities.

Otherwise known as West Point, the USMA is a four-year academy for the Army.

Located in Pennsylvania, the United States War College is a graduate school for military officials.

The USAASC is a DRU to support executive offices with managing resources and the Army’s structure.

Also, the commander is Mr. Craig A. Spisak.

The Human Resources Command focuses on the career management of soldiers.

Furthermore,t eh career management starts with basic training and extends all through retirement.

The Department of the Army created the Civilian Human Resources Agency to handle the civilian workforce’s human resources.

There are Army civilians all over the world, and the CHRA handles everything from recruitment to retirement.

The Army Corps of Engineers has three areas of their mission.

They are an engineer regiment that also handles military construction. Also, the Army Corps of Engineers works with civilian organizations, as well.

Finally, the Commanding General is Lieutenant General Scott A. Spellmon.

The Army Intelligence and Security Command handle the information, intelligence, and security operations at a national level.

The MEDCOM is a direct reporting unit that provides health services and protection to the Army.

Moreover, this type of medical support is critical while caring for both troops and their families.

Arlington National Cemetery is a DRU. This cemetery is for military members and is located in Virginia across the Potomac River near Washington D.C.

Army Chain of Command: Within your Unit

When you are new to your unit, it is wise to memorize your chain of Command.

This list goes in order from the bottom up.

After this point, you go to your Commander in charge of whatever Army Command under which your unit falls.

For instance, your unit might fall under the U.S Army Materiel Command.

Also, it would help if you memorize your NCO chain of command.

The Army is one branch of the military under the Department of Defense.

There are two parts to the Army and that is the operational and institutional side.

The institutional side supports the operational side, but they both need each other for effectiveness.

The chain of command begins with the President of the United States.

Beyond the executive offices, the Army has four commands.

Next, there are component commands that oversee regions of the world.

Within those commands, there are Direct Reporting Units.

A soldier’s chain of command begins locally where they are stationed. 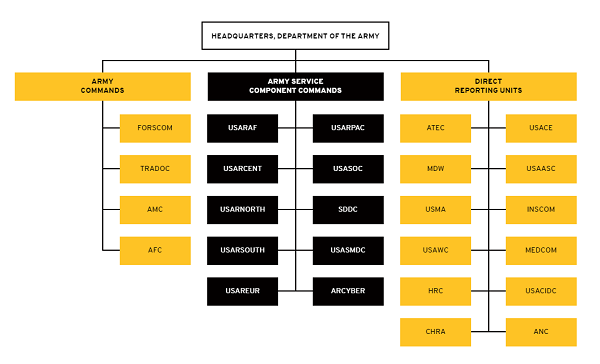