Combat Engineers (MOS 12B) are important to the daily operations of the U.S. Army.

An Army Combat Engineer serves, assists, or supervises a team while dealing with rough terrain and generally in combat situations.

MOS 12B Army Engineers are experts in mobility, counter-mobility, engineering, and survival.

It would be nearly impossible for the U.S. Army to function properly without the assistance of MOS 12B.

The purpose is to create an easier method for your fellow soldiers to engage the enemy while also becoming a destroyer of enemy defense positions and obstacles.

As a result, there are several important qualifications and training you need to become MOS 12B.

You are allowed to pick your military occupation specialty (MOS) in the Army.

Field 12 is the overarching category for Army engineers.

MOS 12B is a blend of combat fighter and engineer.

If you are interested in becoming MOS 12B, you need to get a score of 87 or higher on the Armed Services Vocational Aptitude Battery (ASVAB).

Though it is not mandatory, it is a good idea to already know how to use a variety of hand and power tools.

It helps to have a combination of an engineering-type of mind, as well as love for action and working outdoors.

Once you pass the ASVAB, it is time for basic training.

Combat Engineers must complete the standard 14 weeks of One Station Unit Training (OSUT) which is a combination of Basic Combat Training (BCT) and Advanced Individual Training (AIT).

Army Engineers have the choice between specializing in combat engineering (12B), general engineering, or geospatial engineer operations.

Training is a combination of classroom lessons and practical work out in the field.

MOS 12B receive their engineering training at Fort Leonard Wood in Missouri.

Those serving in the Army as an MOS 12B can expect to be potentially based at one of the following duty stations:

What does an Army Combat Engineer Do?

The Army Combat Engineer (MOS 12B) is part of a larger squad and is assigned specific duties.

Combat engineers are experts on certain functions of the U.S. Army.

They are more or less modern-day Army “MacGyvers.”

MOS 12B are first and foremost engineers.

Consequently, Army Combat Engineers are outstanding at constructing just about everything from places of military engagement, to building structures, to creating defense mechanisms.

MOS 12B are the very definition of an engineer which is “the branch of science and technology concerned with the design, building, and use of engines, machines, and structures.”

You can expect to design and build everything from infrastructure to explosives.

Combat Engineers (MOS 12B) are experts with explosives of all types.

They are able to not only successfully build them from scratch, but also have an understanding of where to tactically place them in the field.

As a result, MOS 12B are tasked in a larger squad with handling and supervising the placement of explosives.

Engineers are experts in a variety of combat situations and know the right defensive systems to install based on the location and demands of the mission.

One overlooked aspect of the job duties of Army Combat Engineers is the ability to deal with terrain.

Combat Engineers are experts with managing difficult obstacles and climates.

They are able to conduct operations that clear routes for the rest of the squad.

These include troubling places to cross like rivers where the ability to construct a quick bridge is mandatory to the success of an operation.

Sometimes obstacles must also be cleared in order to make way with the use of explosives or other machinery.

MOS 12B are heavy equipment operations that know how to handle a variety of machinery.

Another important thing to note about MOS 12B is there immense responsibility toward keeping the rest of the squad safe.

As a result, Combat Engineers are tasked with detecting mines – either visually or with a mine detectors.

It is the reason why MOS 12B are sometimes nicknamed for being individuals that “Clear the Way” in combat.

The important of Army Snappers, or MOS 12B, has only increased with the recent conflicts in Iraq and Afghanistan where bomb clearing is essential.

Though Army Combat Engineers (12B) are most well known for engineering they also have combat skills.

MOS 12B can support front-line infantry when necessary.

Combat Engineers are trained soldiers that have the ability to operate firearms though they primarily specialize in explosives.

A Soldier must be a Graduate of the Sapper Leader Course, a 28-day course designed to train leaders in small unit tactics, leadership skills, and skills required to perform as part of a combined arms team, to become a Sapper and wear the Sapper Tab.

What does an Army Combat Engineer make?

Army personnel are paid the same regardless of job.

The amount of pay depends on years of service as well as Army rank (see table, below).

Though pay is not outstanding, especially for E-1, there are several other benefits provided by the U.S. Army:

The general consensus is working MOS 12B is one of the more fulfilling careers in the Army.

Engineers are in high demand both in the U.S. Army and after military service with civilian jobs (see more, below).

MOS 12B combines the ability to use your brain to design and build infrastructure, as well as the thrill and adrenaline of live combat.

However, Combat Engineers can expect to get deployed to dangerous locations such as Afghanistan and the Middle East where bomb clearing is vital to the success of military operations.

Since MOS 12B are engineers they can attain civilian engineering jobs after leaving the U.S. Military.

The construction industry, along with inspection jobs are the two most relevant hires.

The role of the Army Combat Engineer (MOS 12B) is becoming increasingly important with the recent conflicts in Afghanistan and Iraq.

Combat Engineers are capable of a variety of tasks that helps a large squad survive out in combat.

Additionally, the civilian job outlook post-retirement from the U.S. Military is very bright. 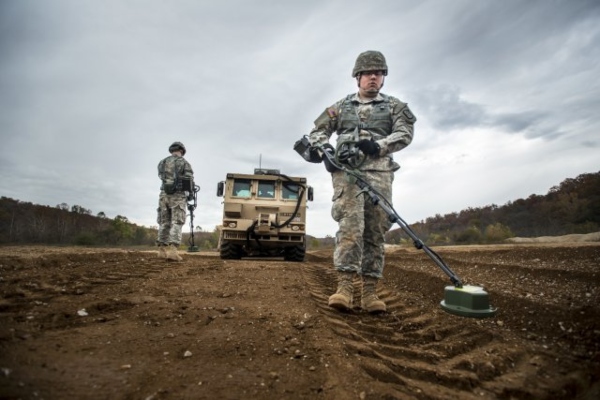 Learn more about what it takes to be an Army Combat Engineer, including what their responsibilities are, where they go to school, and more.