Officer Candidate School teaches you the fundamentals of serving the military branch as an officer.

Learn more about what you can expect at Officer Candidate School. 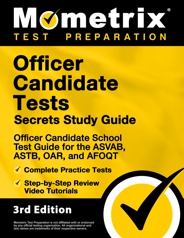 If so, you need to check out the Mometrix ‘Officer Candidate Tests Secrets Study Guide‘.

It’s packed with info on exclusive test taking techniques like:

Officer Candidate School (OCS) is the primary training academy for prospective officers of the U.S. Army.

Army Commissioned Officers serve as managers for the military branch, planning and influencing critical decisions, as well as acting as problem-solvers for a group of enlisted soldiers.

The training academy is open to qualified enlisted Noncommissioned Officers along with civilians with at least a four-year college degree.

The United States Army depends on highly qualified and competent officers to make important decisions out in the field.

Therefore, Army OCS presents recruits with the framework to prepare and handle the important role as a unit commander.

The Army focuses on teaching tactical training as well as handling emotions under intense stress.

In short, prospective officers learn how to become leaders throughout the training.

There are many reasons why enlisted personnel and civilian college graduates consider attending Army OCS.

It’s not only a prestigious title within the United States Army but also invaluable once you transition into civilian life.

How long is Army OCS?

The training academy is based out of Fort Benning in Georgia.

Army OCS trains, assesses, and evaluates prospective commissioned officers for not only the U.S. Army, but also the Army National Guard and Reserve.

Officer Candidate School adheres to the motto “Standards, No Compromise”.

It’s worth mentioning that the U.S. Army is the only uniformed branch where individuals must enlist before they attend Officer Candidate School.

Consequently, recruits need to attend Basic Combat Training (BCT) prior to Officer Candidate School, unlike other officer training programs of the Marine Corps and Navy.

How Are Future Officers Evaluated?

First, you need to enlist in the U.S. Army like any new recruit.

The Army has basic guidelines you need to meet like proving you’re a U.S. citizen and passing a medical exam.

The series of tests allows the military branch to assess your mental competence.

Prospective officers need to score General Technical (GT): 110 or higher on the ASVAB to stay considered for the prestigious Officer Candidate School.

Candidates in their senior year of college may enlist in the Delayed Entry Program (DEP).

The United States Army (like other military branches) separates officers from enlisted personnel.

While enlisted personnel represents an overwhelming majority of the Army (about 83%) the remaining percent serve as higher-ranking officers.

Officers are critical to the U.S. Army because they act as the commanding leaders of separate units.

Army Commissioned Officers need to manage personnel in their unit as well as make tough decisions.

A few general job duties of an Army Officer, regardless of the MOS, include:

During Army OCS, prospective officers have the opportunity to complete an OCS preference statement.

The statement lets you select what Army officer branches you prefer assignment, though the statement is no guarantee that you’ll receive your wishes.

Army OCS graduates usually receive assignment to one of the following branches:

Enlisting in the Army and joining the OCS training program after you qualify is one of the best ways you can serve and represent the United States Army.

How Do You Get To Army OCS?

The United States Army requires all recruits, regardless of designation, to attend Basic Combat Training (BCT).

Boot camp is your orientation to the United States Army with thorough training.

Officer Candidate School is open to civilians yet only with an applicable four-year college degree.

The basic requirements for Army OCS candidates that are already enlisted personnel:

From the beginning, candidates get organized into squads where they start to develop leadership skills in small-unit tactics.

The Army enforces strict physical fitness scores for Officer candidates with an expected score between 240-270.

However, Army OCS is different from boot camp in that instructors expect candidates to immediately act like leaders and take responsibilities.

Then, Army OCS graduates receive an assignment with the rank of Second Lieutenant (O-1).

How hard is Army OCS?

The purpose of Army OCS is to place the recruit under physical, mental, and emotional pressure to simulate the stress and exhaustion of combat.

It’s similar to the situational encounters you train for at Basic Combat Training (BCT), yet with more challenging exercises since the school is reserved for higher-ranking officers.

Officer recruits spend 12 weeks at Fort Benning in Georgia preparing for their commission.

The Army references the Field Manual 3-21.8 as guidelines for instruction and evaluation.

As a result, the Army currently trains recruits at OCS in over 70 different tasks.

Recruits are under constant observation and evaluation.

The course is physically demanding with a plethora of tactical road marches, timed runs of varying distances, and Army Combatives training.

Additionally, the Army considers the mental and emotional levels of each trainee.

Because both factor heavily into leadership and making the right decisions under pressure, the Army tests problem-solving and moral resolve in their evaluations.

Army OCS classes are limited to under 200 Officer Candidates making it not only difficult to make it to OCS but also complete the program.

Do you have more questions about Army OCS?

Here are some questions that we receive a lot from readers:

Recruits go through a few stages to receive their distinction as an Army Commissioned Officer.

First, you start out as a Basic Officer Candidate (BOC).

The basic training phase provides an orientation on the training program as well as tests to act as baselines.

The Army scores all your events using the Order of Merit (OMB) list used for branch selection.

Once you complete the basic phase you receive a branch selection and transition into an Intermediate Officer Candidate (IOC).

The stage of training introduces more academics while also focusing on field and tactical instruction.

There are final exams that candidates need to pass in academics and physical fitness.

Do you get paid during OCS?

Yes, every recruit begins to earn compensation from the U.S. Army once they reach boot camp.

The amount you receive in pay is based on your Army rank.

Therefore, your pay is at the E-5 level until you graduate and receive a formal commission.

OCS candidates that are administratively eliminated or medically disqualified from OCS will be reduced in grade as determined by the Commandant, OCS.

While both training courses push you to the limits in terms of physical fitness, there is more stress on leadership qualities at OCS.

Army OCS candidates are constantly evaluated for their leadership characteristics in addition to physical fitness and tactical skills.

The program is also slightly longer (12 weeks compared to 10 weeks).

It prepares high-ranking officers, those that will make difficult decisions out in the field later on down the road.

What happens if you fail OCS?

The U.S. Army has the final call when it comes to whether or not you pass Officer Candidate School.

If you fail Army OCS you have one of two choices:

While it’s certainly frustrating for candidates that don’t pass the officer academy you should not feel too dejected.

Enlisted personnel is the lifeblood of the Army and you can still serve your country in many facets under the designation.

What happens after OCS?

Once you complete the 12-week training course at OCS it’s time for the next step in the process.

Its purpose is to train new officers on the subject matter specific to their new job (since they only received general leadership and tactical training at OCS).

Army Officers are different from enlisted personnel in that they can make suggestions, yet their MOS and assignment is not guaranteed.

The U.S. Army uses the Order of Merit (OML) list to compare officer candidates to each other.

Those that perform near the top of the metrics generally get assigned to the branch of their choosing.

Meanwhile, lower-performing OCS students will likely get placed wherever there is a need in the Army – and likely not their first or second choice for placement.

Therefore, performing well at Army OCS is critical to getting an assignment that you’ll enjoy.

Candidates are sent through a variety of training exercises and constantly evaluated based on leadership performance.

The benefits of attending Army OCS and becoming a commissioned officer are plentiful.

Your experience as an Army Officer prepares you for an exciting career leading and ordering others in your unit.

It will make you into one of the best leaders the world has to offer with the pressure of overseeing and keeping other lives in your unit safe. 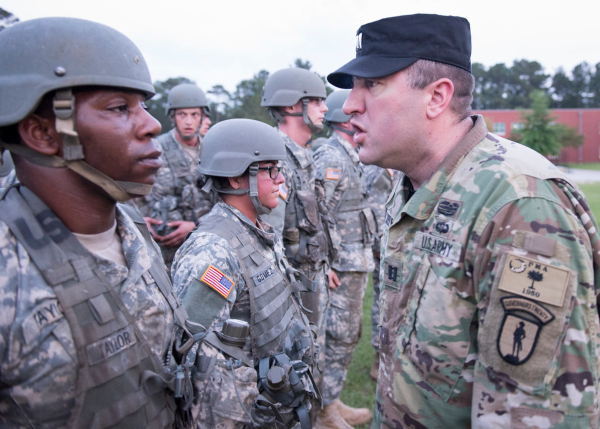 Learn more about Army Officer Candidate School (OCS), including what the requirements are, how to get in, and more.