In layman’s terms, a Navy Cryptologic Technician Interpretive (CTI) is simply a linguist for the Navy.

CTIs are normally trained in one of six languages:

The language a CTI is assigned is dependent on Navy requirements, aptitude, and school quotas.

Additional languages are available to those CTIs that qualify.

CTIs are charged with providing regional and cultural guidance in support of our nation’s needs by collecting, analyzing, and exploiting foreign language communications of interest.

What’s Life Like for a Cryptologic Technician Interpretive (CTI)?

To serve as a Cryptologic Technician Interpretive (CTI) in the United States Navy, you must meet these requirements:

Navy A School Phase I is anywhere from 27-64 weeks long depending on the language the CTI is assigned (Spanish is nine months long, Persian-Farsi, Russian, and Hebrew are twelve months long, and Arabic, Chinese Mandarin, and Korean are eighteen months long).

Training is conducted at the Defense Language Institute (DLI) in Monterey, California.

Phase I training teaches the CTI the comprehensive fundamentals of the language they have been assigned.

Credits are awarded that the sailor may apply towards earning their Associate’s Degree from the Defense Language Institute (DLI).

After graduation for “A” school, Cryptologic Technician Interpretive report for training at a Center of Excellence based on their assigned language in either Georgia, Hawaii, Maryland, or Texas. They are also automatically advanced to E-4

This is the CTIs Phase II Class “F” School. Again, school length varies depending on the language the CTI is assigned. Training can be anywhere from six to twelve weeks in length.

Here, the CTI learns the technical application of the language that they learned in “A” school.

After successful completion of their training, CTIs are often assigned to the Center of Excellence location where they attended “F” school.

What’s Life Like for a Navy Cryptologic Technician Interpretive (CTI)?

A Cryptologic Technician Interpretive specializes in the analysis of radiotelephone communications and adversary developments.

Additionally, CTIs prepare technical reports and statistical studies utilizing their knowledge of a foreign language for review and analysis at a command level.

On a day-to-day basis, the Cryptologic Technician Interpretive has a variety of duties, including:

Sea duty for the CTI is defined as the performance of their duties on a variety of subsurface, air, and surface platforms.

The data they glean is of utmost importance and interest at the command and decision-making level.

A 10-year CTI veteran answered him:

“I’ve been a CTI for about ten years now. I’ve deployed on subs which absolutely did mean spending 12 hours in a dark room either translating or listening to white noise. That’s also the job that got me to see Japan, Singapore, Philippines, etc.”

“I’ve also spent years as essentially a CTR composing reports, living a life barely different than a civilian. I’ve had a couple other jobs where language was useful but my primary duty was to be a subject matter expert on my region.”

“CTIs on the watch floor do spend a ton of time just translating, but there’s room to move up to more supervisory roles for those that want to.”

“I’ve also seen some go straight into being pseudo-CTNs, usually if they have a lot of network and coding experience.”

Cryptologic Technician Interpretive is one of the few rates in the US Navy that does not have a Sea/Shore Rotation. CTIs are normally assigned to a Center of Excellence in Texas, Hawaii, Maryland, or Georgia.

They are, however, frequently deployed for temporary duty with Navy Special Operations, or a variety of air, surface, and subsurface platforms.

How Much Are Cryptologic Technician Interpretive (CTI) Paid?

However, unlike other ratings, sailors in the Cryptologic Technician Interpretive rating receive a Foreign Langauge Proficiency Bonus for maintaining proficiency which can be upwards of $1,000 monthly depending on the number of languages they are proficient in, as well as their proficiency level.

In addition, CTIs are eligible for a $25,000 Enlistment Bonus after successful completion of Phase I and Phase II training.

Reviews from current and former CTIs on indeed.com vary, but the vast majority are positive: 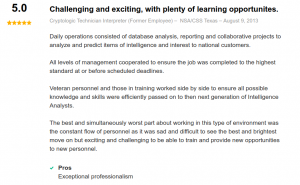 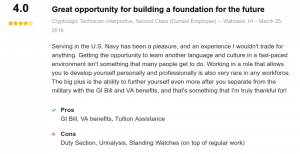 More than 2,100 sailors serve in the Cryptologic Technician Interpretive rating in today’s Navy.

Related Article: 10 Best Jobs In The Navy For Civilian Life

Civilian career opportunities for former CTIs are plentiful and include such jobs as:

In addition, CTIs should take advantage of their TS/SCI security clearance to use their skills in the National Defense/Intelligence community.

Sailors in the Cryptologic Technician Interpretive rating are encouraged to take full advantage of on-the-job training (OJT) opportunities, and educational opportunities offered and afforded to them during their naval service.

The Navy also strongly encourages CTIs to obtain a Defense Language Institute (DLI) Associate of Arts Degree in their target language while serving.

If you are considering the US Navy, possess the ability to learn a foreign language, have above average speaking and writing skills, a good memory, and an interest in technology, give some consideration to the Cryptologic Technician Interactive (CTI) rating.

What is a Cryptologic Technician Interpretive in the Navy?

A Navy Cryptologic Technician Interpretive (CTI) is the Navy’s position for linguists, trained in a second or third language in order to interpret intelligence information.

How much does a cryptologic technician make in the Navy?

Navy personnel are paid based on their rank and time in service. However, CTIs receive a Proficiency Bonus for each language they qualified for, up to $1,000 a month. They also receive generous reenlistment bonuses.

How long is Navy CTI A school?

Like all language training for the Armed Forces, Cryptologic Technician Interpretives attend the Defense Language Institute in Monterey, California. The length of training depends on the complexity of the language, from 9 to 18 months long.

How do I study for the DLAB?

The Defense Language Aptitude Battery tests your aptitude to learn a new language and recognize patterns in speech and writing. However, if you have an aptitude for English or another language, it will probably translate well.

What percentage of people pass the DLAB?

The DLAB measures aptitude and getting a low score will prevent you from qualifying for a military linguist job. Only potentially qualifying personnel take the taste, but even with pre-screening, about 50 percent fail to qualify.