You could work every day in administration or as a cook, but you still know how to handle yourself with a rifle and in combat.

After graduating from boot camp, Marines earn a day of travel and ten days of leave.

Those who are in an Infantry MOS attend the School of Infantry.

Those without an Infantry designation attend the Marine Combat training through the School of Infantry.

1. What is Marine Combat Training (MCT)?

Marine Combat Training is located at Camp Pendleton in California and Camp Geiger in North Carolina.

This training is a 29-day infantry training through the School of Infantry.

Not all Marines are Infantry, but the Marines consider every Marine a rifleman.

This means all Marines must have the ability to handle themselves during combat.

Some non-combat Marine MOS’s include an Air traffic Controller or an Intelligence Specialist.

You can tell the difference between infantry MOSs because the MOS code for infantry positions begin with 03.

You might attend Marine Combat Training at Camp Pendleton or Camp Geiger. In either case, your training is the same.

The first week consists of checking in and the issuing of your gear.

Later that week, you will do a five-mile hike, learn field care, and do a lot of hiking and running. Also, you begin weapons training.

During marksmanship, there are several weapons Marines learn.

During the fourth week, you prepare for a test, continue combat conditioning, hiking, and engage in a three-day field exercise.

The last couple of days include a run and turning in your supplies before graduation.

Related Article – What To Bring To Marine Boot Camp

Marine Combat Training is a challenging training program. While it lacks the intensity of the infantry training those with the infantry MOS enjoy, it is still tough.

However, Marines who participated in the Marine Combat Training report on Quora vastly different experiences when comparing boot camp and MCT.

“If you’re going to SOI under a non-infantry MOS (which is called Marine Combat Training – MCT), then it’s like freakin’ heaven compared to boot camp. The boot camp atmosphere is still there a little bit, but you have a lot of freedom in your free time. The kind of freedom that you can only dream about in boot camp.”

Other Marines found the experience less pleasant. This Marine commented on Reddit, “Honestly, it was the worst month of my entire four years in; I would have rather done a month more of boot camp.”

The degree of enjoyment seems to range from “More physical, less mental than boot camp” to “it was the worst month I’ve had in the Marine Corps.”

Despite the range of opinions and experiences, it is essential to note the difference between MCT and training at the Infantry Training Battalion (ITB).

ITB has a mission to train infantry Marines for 59 days. During the first 21 days of ITB, all Marines receive the same training before splitting into MOS-specific infantry training.

On the other hand, MCT is for those without an Infantry-related MOS.

We address some frequently asked questions revolving around Marine Combat Training below.

4. Where Is MCT for Marines Conducted?

Some Marines attend Marine Combat Training at Camp Pendleton in California while others attend Camp Geiger in North Carolina.

Typically, if you are from an area east of the Mississippi, you attend Camp Geiger.

On the other hand, if you are west of the Mississippi, you will go to Camp Pendleton.

5. How Long Is MCT Training?

The training is 29 days in length. This time frame includes administration procedures initially and consists of the day of graduation at the end.

6. What Happens After MCT?

After attending Marine Combat Training, it is time to attend schooling in their Military Occupational Specialty (MOS) before moving on to their permanent duty station.

Related Article – List of Marine Corps Bases in the US

The Marines expect every member to possess the ability to fight in combat.

This is why the Marines say all Marines are riflemen.

However, those without the infantry designation still need combat training.

There are two locations for this training. If you live east of the Mississippi river, you attend Camp Grieger.

If you live in the west, you attend training at Camp Pendleton in California.

The training program’s design gives Marines an overview of combat skills, including marksmanship over various weapons, navigation, and other warfare fundamental skills.

Some Marines found MCT to be a challenge, while others thought it was much easier than boot camp.

After this training, Marines move on to training specific to their MOS before transferring to their Permanent Duty Stations. 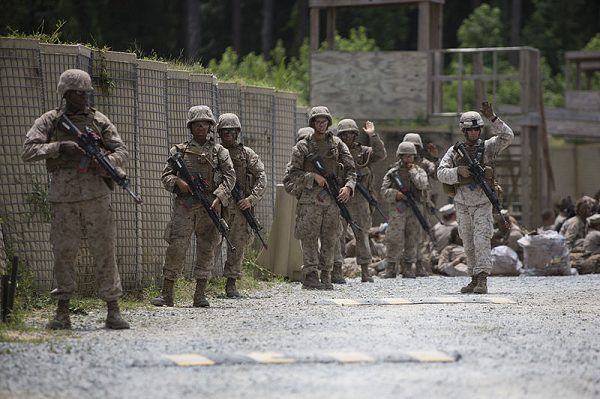 Marine Combat Training (MCT) is a school that Marines attend to learn how to become proficient with their weapons, and combat.