Annapolis is the capital city of Maryland, and is situated on the Chesapeake Bay and the mouth of the Severn River.

Annapolis, MD is home to the following military institutions:

The United States Naval Academy is adjacent to city limits.

It serves as the federal service academy for the U.S. Navy and Marine Corps with origins that date back to 1845.

The historic, gorgeous campus (“the Yard”) spans nearly 340 acres on the former grounds of Fort Severn.

Frederick, Maryland has been an important crossroads for centuries along the east coast.

It represents a major intersection between Baltimore, MD, and Washington, D.C., as well as the Appalachian mountains.

Today, the military-friendly community (along with nearby Thurmont, MD) offers affordable housing for military families and service members stationed:

Fort Detrick (Frederick, MD) is currently under the jurisdiction of the U.S. Army Futures Command.

In the past, the military base in Maryland was headquarters for the U.S. biological weapons program.

The U.S. Army Medical Research and Development Command runs its headquarters out of Fort Detrick.

Meanwhile, Thurmont, MD is not far from NSF Thurmont/Camp David – a notorious retreat for the president of the United States.

Maryland is directly southwest of the District of Columbia and Washington, D.C.

The state supports many military operations taking place in the nation’s capital directly to the southwest.

As a result, service members generally rely on Camp Springs, MD, and Bethesda, MD when stationed at the following military bases:

Joint Base Andrews (JBA) is under the supervision of the United States Air Force 316th Wing, Air Force District of Washington (AFDW).

The military base in Maryland is relatively new with construction being completed in 2009.

The medical center is adequately placed near the headquarters of the National Institutes of Health.

Consequently, troops and dependents are treated with some of the finest medical services in the country.

Fort George G. Meade is an important military facility for the U.S. Army.

Fort Meade is the headquarters of the United States Cyber Command and National Security Agency (NSA).

Military housing is available directly on the base at Fort Meade.

You can expect the following stipend for 2022 based on military rank and dependents (if applicable) at Fort Meade:

Aberdeen Proving Ground (APG) is another military facility operated by the U.S. Army in Maryland.

The remote facility supports more than 7,500 civilian and 5,000 military personnel.

Furthermore, the Adelphi Laboratory Center supports research and other operations of the U.S. Army Reserve.

Naval Air Station Patuxent River exists on the Chesapeake Bay near the mouth of the river.

Additionally, the military base is home to the U.S. Naval Test Pilot School and Atlantic Test Range.

For this reason, NAS Pax River represents the primary center for naval aviation tests and evaluations on the Atlantic Coast.

Lexington Park, MD is the best housing option for troops that are not considering living directly on the base.

Please find the Maryland BAH rates for personnel living directly on base at NAS Patuxent River:

The historic military installation in Maryland dates back to World War I.

The U.S. Department of Defense (DoD) relies on NSF Indian Head for research and development related to explosives and pyrotechnics.

The large facility employs a workforce of nearly 2,000 personnel.

Active-duty troops seeking housing have the option of living directly on the base or in the nearby, small community of Indian Head, Maryland.

Here are the Maryland BAH rates for 2022 regarding Indian Head, MD:

Baltimore is easily the largest city in Maryland and therefore features the most available housing for military families.

Warfield Air National Guard Base is the only military base directly inside Baltimore, MD.

Regardless, military families often rely on living arrangements in Baltimore (or the surrounding neighborhoods) for affordable housing.

Baltimore is not far from several Maryland military bases as well as Washington, D.C.

Here are the Maryland BAH rates for Baltimore, MD:

Learn more about the military bases in Maryland. 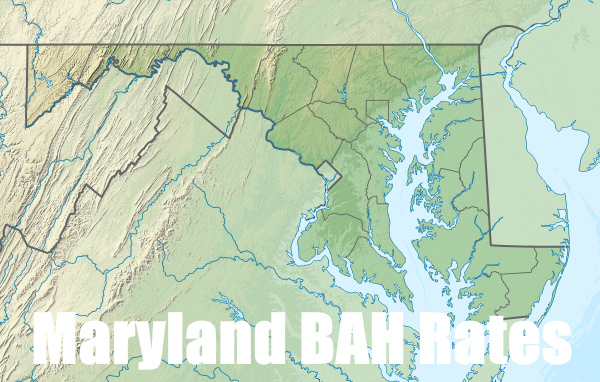 Maryland BAH (Basic Allowance Housing) assists with high housing costs in Baltimore-Washington D.C. and other areas of the state.