The U.S. Armed Forces prepares recruits for handling a pistol or rifle through different means.

While the U.S. Army and Marine Corps focuses on marksmanship utilizing rifles or automatic weapons, the Navy has a different process.

Consequently, the Navy rifle and pistol qualification is a different type of test that is part of your responsibilities at basic training.

Recruits that train for the Navy rifle and pistol qualification also compete for the Marksmanship Medal.

The award is the highest weapons qualification granted in both the U.S. Navy and Coast Guard.

Learn more about Navy rifle and pistol qualifications to prepare for boot camp.

As a result, the Navy ditches the typical M-16 rifle utilized during other types of training for the Mossberg 500 shotgun and M-9 pistol.

However, even before you start to handle a weapon directly, the Navy provides simulated training on a computer system.

Thus, recruits spend several hours of weapons training in a classroom and simulated environment prior to hands-on training.

The Navy rifle and pistol qualification is one of the better military training program as the classroom segment introduces recruits to safety practices.

Navy recruits learn how to draw and holster the weapon properly along with proper cleaning procedures.

For this reason, recruits are much better prepared and aware of safety procedures prior to the first time they step on a firing range.

They already possess the knowledge to safely load, handle, and unload the two weapons used during basic training.

Consequently, if you have limited experience handling or firing weapons prior to enlistment you shouldn’t fret too much.

The U.S. Navy gradually introduces its recruits to weapons in basic training so they can develop confidence and awareness.

Classroom studies also focus on the fundamentals of marksmanship, including the characteristics of various weapons used in the Navy and its various mechanisms.

Navy weapons orientation concludes with at least 3 hours of “dry firing” (using the weapon minus ammunition).

What is the Navy Rifle Qualification?

The United States Navy opts to replace the standard rifle qualification of most branches with a shotgun alternative.

The Navy shotgun qualification is composed of a course with 4 separate firing stations:

As you can see, the Navy rifle / shotgun qualification is distinguished by 4 individual firing stations each with their own firing position.

The first two stations require using the firearm behind a barrier either standing or kneeling (4 rounds).

Meanwhile, the final two stations do not include a barricade and test your accuracy from an upright position.

Additionally, it is important to remember to clear your weapon at the completion of the exercise to avoid getting deducted points because of safety concerns.

The Navy determines if you pass the rifle / shotgun qualification based on accuracy with the targets.

Recruits must have at least 30 shotgun pellets hit each target on the course (4 total).

The max score possible on the Navy rifle assessment is 162 points whereas a minimum of 90 points is needed to complete the test.

It may sound sophisticated, but considering that each shell consists of 9 pellets (and you get to fire 3-4 rounds per target) – accuracy is achievable with a little practice and knowledge.

Thus, paying attention during Navy weapon qualification orientation and during the simulated exercises gives you an advantage over other new recruits.

What is the Navy Pistol Qualification?

The U.S. Navy designates the M-9 pistol as its training weapon for the handgun portion of the qualification.

All in all, the 3 phases of pistol training culminate in 48 live rounds.

The Navy once again stipulates the amount of rounds you can fire from a specific distance along with stances allowed at each station.

Recruits are allowed to fire 12 rounds each from the 3-yard and 7-yard markers.

However, there are different expectations at each station.

For example, the first station tests your accuracy firing the M-9 pistol with both your dominant hand and weak hand.

Like the 7-yard marker, the first station is timed so specialists learn how to reload and fire the weapon under pressure to determine if accuracy changes as a result.

Then, at the final station (15 yard line), recruits have double the ammunition (24 rounds) to complete the exercise.

The final station once again assesses your accuracy from a further distance while also having to holster and reload the weapon.

Additionally, recruits switch between a standing and kneeling position while firing rounds at the 15-yard line.

Points are awarded depending on which area(s) of the human-shaped target you hit.

Consequently some vital areas (head, chest, etc.) are worth more points compared to other parts of the body (hands, legs, etc.).

The purpose of the exercise is to achieve a minimum score of 180 points.

We could get into the specific requirements of each shooting station yet you’ll learn all you need to know about the Navy rifle and pistol qualification during orientation.

The Navy rifle and pistol qualification requires new recruits to master the M-9 pistol and Mossberg 500 shotgun prior to official enlistment.

Recruits get the opportunity to learn about safely handling and loading weapons during orientation, which is unique to the military branch.

Then, new military personnel get the opportunity to qualify and compete throughout the marksmanship courses.

For this reason, the Marksmanship Medal is the highest award that one can receive for weapons qualification in the U.S. Navy and Coast Guard.

The prestigious military award is the equivalent of the Expert Marksmanship Badge that is awarded to comparative talent in the U.S. Army and Marine Corps.

Sailors may qualify for the Marksmanship Medal as an expert with the M-9 pistol, M-16 rifle, or M4 Carbine.

Keep in mind that you do not need to successfully complete the M-16 and M-4 training to become enlisted in the Navy.

Nonetheless, proving your worth with either semi-automatic weapon can earn you a Marksmanship Medal.

Those that qualify for weapons distinction within the military branch are authorized to wear one of the two decorations (separate for pistol and rifle qualifications).

It is also possible to obtain a medal for each designation (Navy rifle and pistol qualification) for simultaneous wear.

In order to qualify for Navy rifle or pistol Marksmanship Medal, you must achieve the following score on an approved weapons qualification course:

Meanwhile, sailors have the option of testing for the rifle qualification using either the M-16 rifle or M-4 carbine:

You’ll note that the U.S. Navy does not feature any marksmanship awards for the Mossberg 500.

Regardless, you must learn to master the weapon as meeting the basic requirements is mandatory along with the M-9 pistol qualification.

The Navy Marksmanship Medals are a noteworthy competition that has existed in the branch since 1969.

How Should I Prepare For The Test?

Since you do need to complete the M-9 pistol and Mossberg 500 shooting exercises as part of your duties at basic training, some recruits fret about the experience.

However, you should not worry about completing the Navy rifle and pistol qualifications for many reasons.

First, the U.S. Navy does an outstanding job (perhaps better than any other branch outside the Marine Corps) in preparing sailors to handle weapons.

It actually has classroom studies dedicated to handling weapons along with simulated training before your first day on the range.

Regardless, preparation is crucial to succeeding in any field, including marksmanship.

Thus, if you have a goal to achieve the Sharpshooter or Expert Marksmanship Medals in the U.S. Navy then you should start training as soon as possible.

Of course, your training opportunities may be limited due to the weapons that you are legally allowed to possess along with access to a safe and protected firing range.

There are many courses available that can gain you invaluable time and experience firing pistols, shotguns, or rifles prior to enlistment.

You should consult local gun ranges or safety classes for more information.

The Navy rifle and pistol qualifications exist to prepare every recruit for safe and accurate handling techniques.

The military branch brings along new recruits slowly as they engage in classroom studies and simulated activities before advancing to the gun range.

There is no requirement to complete a rifle qualification to serve in the U.S. Navy, unlike other military branches.

However, advanced shooters may want to consider competing for a Marksmanship Medal using a pistol or rifle.

The Navy does require that every new recruit learn how to handle a shotgun (Mossberg 500) though no awards exist for shotgun qualification.

Advanced marksmen can obtain a ribbon or medal based on the test score for the Navy rifle and pistol qualifications. 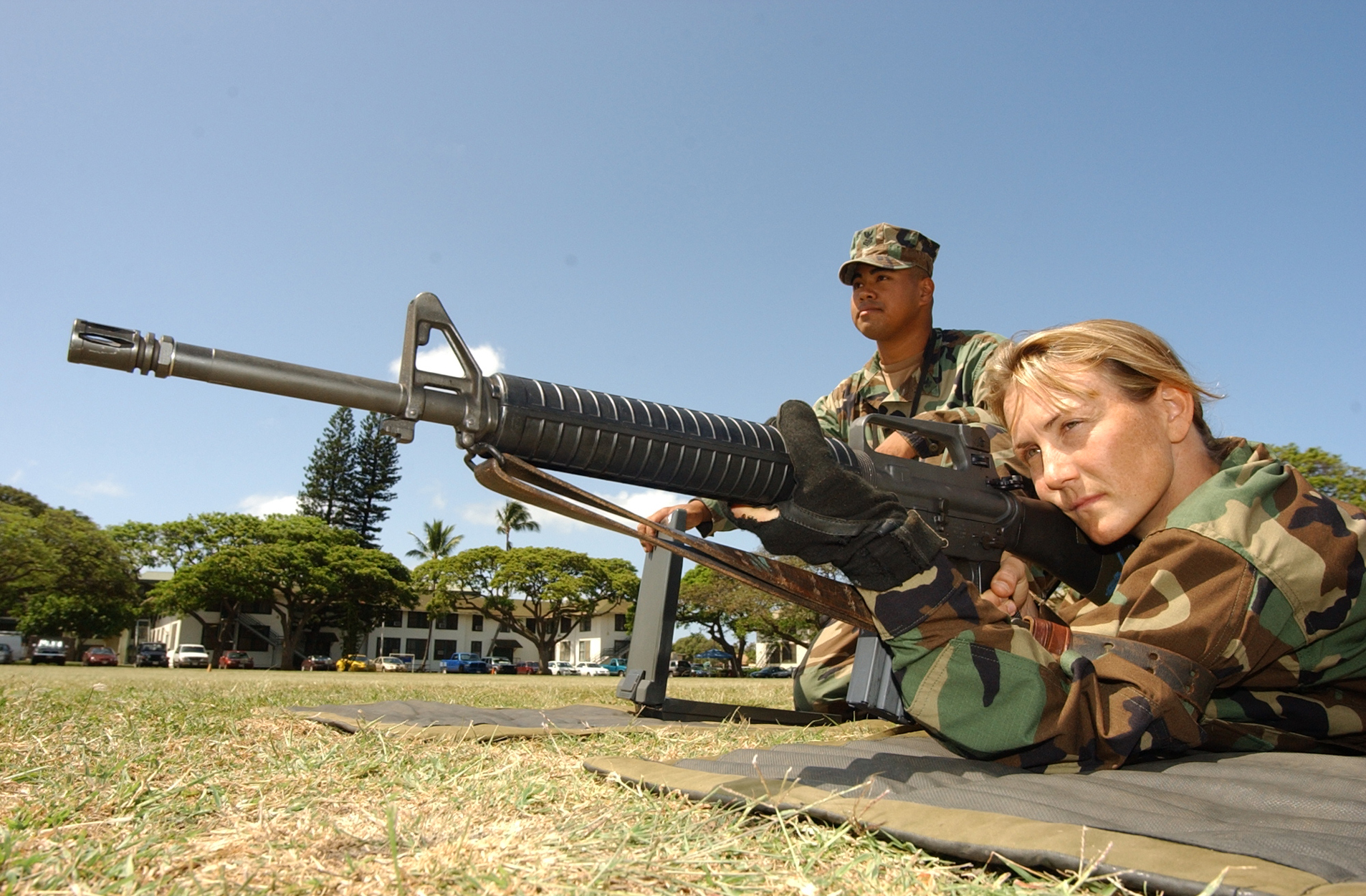 Learn more about the Navy rifle and pistol qualification, including how and where it's conducted, the points system, marksmanship awards, and more.