Army Intelligence Analysts (MOS 35F) play a vital role in providing the Army with information about the enemy.

These specialists are responsible for analyzing, processing and distributing intelligence to Army personnel.

This position requires secret security clearance because of the sensitive information that is learned and processed.

Generally, with secret security clearance, individuals must be a U.S. Citizen and cannot have any previous history of being in the Peace Corps.

This position is entry-level and does not require any previous Military experience.

To enter into MOS 35F, individuals will be required to achieve a score of at least a 101 on the Skilled Technical portion of the ASVAB tests.

After passing all entry, physical, and medical requirements, recruits will attend 10 weeks of Basic Military Training.

AIT will consist of classroom and field training on different technologies that will be used, as well as proper information gathering and communication techniques.

Skills that are helpful in this MOS:

Those serving in the Army as an MOS 35F can expect to be potentially based at one of the following duty stations:

What are the Job Duties of an Intelligence Analyst?

Intelligence Analysts in the Army handle strategic and tactical intelligence.

They provide information about enemy forces and potential battle areas.

Individuals in this MOS will be doing a lot of analytical thinking and problem-solving.

It is often said that individuals who like piecing together puzzles are perfect for this MOS because the work performed and thinking required is similar to putting the pieces of a puzzle together.

The goal is to collect, examine, and report the enemy’s intended plans, information and direction.

Soldiers in this MOS will be trained on computer systems and must be familiar with different forms of technology as well as networking.

There may be times when the Intelligence Analyst has to establish networking capabilities in a tactical area prior to gathering information.

When obtaining information, the specialist will access the significance and reliability of the information with current intelligence.

It is important for the analyst to learn what information may be pertinent or time-sensitive to current missions.

Intel Analyst cannot quickly disregard data, they will compare it with other information and estimate the relevance and value it brings.

The information gathered needs to be documented, easily accessible, and have the ability to be cross-referenced.

The Intel Analyst will establish and maintain systematic records, files, and databases.

These records must be error-free in order to avoid any mission mistakes or missed opportunities.

Establishing and maintaining these records and databases allow for the sharing of information between strategic agencies.

This MOS can involve a significant amount of reading and analyzing the reports you read.

It can also involve a significant amount of preparing reports and presentations for commanding officers.

Soldiers will work in a fixed intelligence unit or a field unit.

This position can have hours that vary.

Most days, the hours will be standard with physical work-out in the morning and then reporting for work duty.

Some days the mission will require you to work very long hours and other days they can be shorter.

Intel Analyst will use Military Symbology to quickly detail information and must be familiar with all symbology.

Military Symbology in the Intelligence Analyst position refers to the markings and symbols on a manual or digital map.

Information gathered can include weather, terrain and opposing forces positioning.

Classified reports are created by the Analyst using the maps as well as other data such as photographs.

After multiple information pieces have been gathered, the information will be consolidated onto a situational map.

The Intelligence Analyst is in charge of security.

This duty involves document security: ensuring the document is secure from outside sources when sharing the information electronically.

It is important the document information does not end up in the wrong hands-electronically and physically.

This job function includes the physical security of the document by locking doors to the storage area or placing the document/information into high-secure areas.

Providing soldier clearance is also a security job function of the Intelligence Analyst.

It is important for the Intelligence Analyst to identify and address any security vulnerabilities.

This could consist of managing the access soldiers have to physical documentation as well as identifying any access that outside entities could get to the information digitally.

Any vulnerabilities could leak to leaks of sensitive information.

Once data has been gathered the Intelligence Analyst will prepare all-source intelligence to support briefing the combat commander.

This can include battle damage assessments or any other information the commander may need.

You may be providing the commander with enemy location, their intended path or how a change in weather could be coming and its impact on the mission.

The important intelligence that the analyst provides to the commander will directly impact their decision making.

The intelligence information will be interpreted into courses of action that will support the mission goals.

What Does an Intelligence Analyst get Paid?

Even though this position requires a secret security clearance, it is an entry-level position.

With no prior Military experience, individuals can expect to be paid around $20,000 a year.

This number slightly varies for the first four months as training takes place and is completed.

The pay table below shows a representation of what base pay is like in the Army.

Base pay is not the only way soldiers earn income in the Army.

Soldiers have bonus opportunities, compensation, allowances and other benefits that add to their base pay income.

Some in-demand positions (which varies based on Army needs) offer bonuses.

There are also times when bonuses for meeting expedited recruiting timelines can offer bonuses.

All individuals in the Army will have housing and food paid for while living on-base plus an annual clothing allowance for Military clothing.

The work that is performed can be very engaging and requires you to think critically.

Reviews in this position discuss how competitive the job is and the team-work atmosphere that surrounds it.

Positive reviews discuss the skills that are learned in this position as well as the opportunity that is provided.

Negative reviews focused on the long hours and the constant relocating.

This review below shows a great example of how the hours in an average day are used.

Collecting and analyzing intelligence for the Army is not a job to be taken lightly.

The video below gives an inside look into MOS 35F job functions and importance.

Working as an Intelligence Analyst in the Army provides many skills that relate to civilian careers.

Skills learned in this MOS can provide experience for positions working for government agencies such as the Central Intelligence Agency.

It can also allow for experience working in areas such as research or business planning.

Job titles that relate to this position include:

While working in the Army you can receive advanced education and certificates that will advance your Army career and civilian career opportunities.

An example of a certificate in this position is the Certified Defense All-Source Analysis Level 1 (CDASA-1) from the Defense Intelligence Agency PMO (DIA).

This certificate assists with promotion and allows for civilian career opportunities in Intelligence Analyst.

The Army also offers the PAYS recruiting program which guarantees a job interview with Military friendly employers that can hopefully assist with a job in your career field.

Army Intelligence Analysts (MOS 35F) provide the Army with information about the enemy by analyzing, processing, and distributing intelligence information.

How much does an Intelligence Analyst make in the Army?

Like all US military positions, Army Intelligence Analysts are paid according to rank and time in service. However, as an in-demand career field, they are often eligible for bonuses.

How do I become a military intelligence analyst?

How long is intelligence school for the Army?

After Basic, you’ll need to complete 16 weeks of Advanced Individual Training (AIT) for the 25F MOS, conducted at Fort Huachuca in Arizona. You’ll study both in classrooms and in the field.

What ASVAB score do you need for Army intelligence?

To qualify as an Army Intelligence Analyst (MOS 35F), you’ll need to score at least 101 on the Skilled Technical portion of the ASVAB.

Army Intelligence Analyst (MOS 35F) are responsible for the collection, analysis, security and dispensing of critical and sensitive intelligence information.

Individuals in this position will be paid based on rank and pay in addition to being offered Army benefits and compensations.

Job reviews of this position are mostly positive and previous Intelligence Analyst in the Army recommend the position to others. 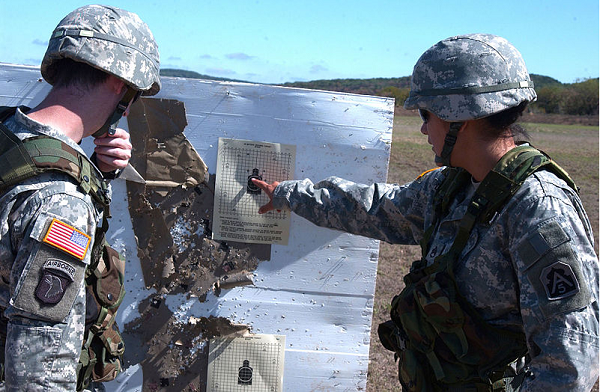 Learn more about MOS 35F, including the requirements, training, duties and responsibilities, and much more.