Military basic training – more commonly referred to by its negative connotations like “boot camp” – is a little intimidating.

It is especially true of young men and women that are entering the U.S. Armed Forces directly out of high school.

For this reason, the Military Buddy Program exists to help ease the transition into the Armed Forces.

The Military Buddy Program allows you (and up to five friends) to enlist and train in the Armed Forces together.

It is a worthwhile opportunity if you are nervous or anxious about surviving basic training.

Learn more about the Military Buddy Program and how to apply under each military branch.

It is officially regarded as the Buddy Team Enlistment Option.

The U.S. Army allows new recruits to recruit their friends to the military branch.

Thus, you and your friends not only enlist at the same time but go through Basic Combat Training (BCT) together.

Furthermore, if you both plan to enlist in the same Army Military Occupational Specialty (MOS), you get to train together at Advanced Individual Training (AIT) as well.

All in all, the Army Buddy Team Enlistment Option grants you this privilege for up to 5 friends.

Therefore, it has never been a better time to try and recruit your friends to enlist in the U.S. Army.

The Army stipulates that the Military Buddy Program is only applicable to first-time recruits.

While the buddy option presents the opportunity to train with a friend it is contingent on you both meeting the requirements for the MOS.

Soldiers that enlist in the Buddy Team Enlistment Option generally receive their first duty assignment orders while at AIT.

If you are interested in the Army Buddy Team Enlistment Option, contact a local recruiter for more details.

The U.S. Navy has a comparable Military Buddy Program for small groups of no more than 4 individuals.

The Navy refers to its version as the Navy Buddy Enlistment Program.

Males and females may both apply for the Military Buddy Program that wish to remain together during basic training.

However, mixed gender buddy groups (male and female) are not permitted at basic training.

The U.S. Navy established the buddy program to ease the drastic transition from high school and living with your parents to live in the barracks.

Thus, you’ll likely feel more comfortable so long as you have at least one familiar face at Navy Recruit Training.

The Navy has the shortest boot camp (7 weeks) before recruits progress to advanced training related to their rating (military job).

Recruits are generally assigned to the same company for basic training and initial duty station.

However, nothing guarantees this agreement so being flexible is important in the Armed Forces.

The length of the a mutual assignment with a friend is determined by the respective category in which each individual enlists.

Therefore, all the members of the buddy group must enlist on the same day and at the same Military Entrance Processing Station (MEPS).

The United States Air Force does not provide much information about its Military Buddy Program.

In general, it does not grant special privileges to friends that are seeking to go through basic training at the same place and time.

New recruits enter the Delayed Entry Program (DEP) in the Air Force where they await a departure date to boot camp.

The Air Force does not guarantee that a fellow applicant will receive the same departure date.

However, the USAF does mention in its guidelines that it offers a limited Military Buddy Program to new recruits.

The buddy program does not allow mixed groups of friends (male and female).

You can acquire more information about the limited Air Force Military Buddy Program by connecting with a local recruiter.

The United States Marine Corps is one of the more desirable branches to join in the Armed Forces.

Since it is more selective there is a little more competition at boot camp which is officially called Marine Corps Recruit Training.

For this reason, many new recruits seek to make it through boot camp by having the support of a friend.

Thus, the Marine Corps Buddy Deal does provide means to enlist and train together.

The USMC Buddy Deal is designed to allow new enlistees the opportunity to train together at Marine Corps Recruit Training.

Furthermore, the Marine Corps Buddy Deal may station you with a friend for the first assignment, depending on a few factors.

As is the case with the other military branches, you should inquire with a local USMC recruiter for more details.

In certain situations, the USMC Buddy Deal also provides friends with a grade-in-pay advance upon enlistment.

However, you can only receive these privileges by mentioning the Military Buddy Program to a recruiter, so don’t be afraid to ask!

The U.S. Coast Guard – like the Marine Corps – does not provide much information about a Military Buddy Program.

Nonetheless, it does exist if you make sure to bring it up while you are meeting with a recruiter to negotiate the terms of your service contract.

The Coast Guard Military Buddy Program allows new recruits and one (or more) friends to enlist at the same time.

Coast Guard buddies spend 8 weeks together at basic training which is underappreciated for its demanding nature.

In fact, the Coast Guard has the highest failure rate at boot camp compared to any other military branch (even the Marine Corps).

Consequently, new recruits may find it easier to survive by having an ally to rely on throughout training.

The Coast Guard Military Buddy Program only guarantees that you train together at boot camp.

There is no guarantee after basic training that you’ll receive the same assignment, so keep that in mind.

Nonetheless, the Coast Guard Military Buddy Program is an excellent way to have more support and encouragement during this difficult transition.

The Military Buddy Program is a fantastic opportunity for friends.

It allows you to endure basic training with at least one familiar face as well as potentially share the same first assignment.

The rules and stipulations vary by military branch.

Therefore, the best method for obtaining more information about a particular Military Buddy Program is to contact a local recruiter.

6 Ways To Get Out Of The Military Early 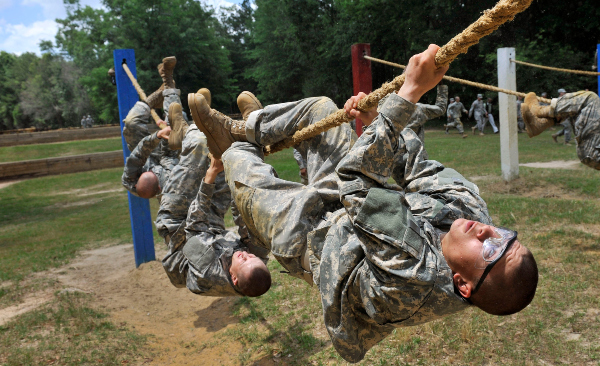 Learn more about the buddy programs for the Army, Navy, Air Force, Marines, and Coast Guard, and see how you can go to boot camp with a friend.