“We dive the world over”

This is the official motto of the United States Navy Diver community. The simple reason for the motto is because it is true.

A Navy Diver (ND) can be assigned anywhere in the world. Moreover, the environments in which they find themselves are ever-changing.

One day, an ND might be in warm, clear, tropical water, and the next in cold, muddy water where their underwater tasks can only be completed by feel.

Navy Divers have been a stalemate of the US Navy since the middle of the nineteenth century.

Navy Divers were used by Admiral Farragut to locate and disarm Confederate mines set at the entrance of Mobile Bay during the Civil War.

They were again employed to study the wreck of the USS Maine in Havana, Cuba prior to the start of the Spanish-American war.

Navy Divers were also utilized in both World War I, World War II, and all American military engagements since.

Surprisingly, however, despite their storied history, the Navy did not officially establish the Navy Diver, ND, rate until 2006.

Prior to this, Navy Divers were normally Gunners’ Mates (GM) whose diving duties were considered a collateral duty, although they did have to be qualified.

While the most well-known Navy Diver is Carl Brashear, the first African-American Navy Diver depicted by Cuba Gooding, Jr. in the film Men of Honor, we should also remember and acknowledge Thomas Eadie.

Eadie was a Navy Gunner’s Mate who trained as a diver.

While working on the sunken submarines USS S-51 and USS S-4, Eadie received the Navy Cross for each of those operations, as well as the Medal of Honor for rescuing a fellow Navy Diver on the USS S-4 on December 18, 1927.

Eadie, although retired by the start of World War II, returned to duty to serve during the conflict.

There are approximately 1,225 Navy Divers in the United States Navy today.

To become a Navy Diver, there are specific requirements and qualifications to meet:

Also, prior to acceptance into the Navy Diver program, recruits must take the C-SORT (Computerized-Special Operations Test).

The C-SORT is an online test that is used to assess a candidate’s ability in performance strategies, psychological resilience, and personality traits.

Recruits can only take the C-SORT once and there is no study guide.

It is graded on a scale of 1-4, with 4 indicative of a high resiliency level.

In addition to the C-SORT, Navy Diver candidates must also take a PST (Physical Screening Test).

The below chart indicates the minimum requirements as well as the automatic qualification scores:

Prior to becoming a Navy Diver, one must first become a Sailor.

Recruits accomplish this via successful completion of Navy Recruit Training, commonly referred to as Boot Camp.

RTC Great Lakes is commonly referred to as “The Quarterdeck of the Navy.”

During these eight weeks, the Navy will teach you the basic skills required of all US Sailors.

The training is 15 weeks long. At Second Class Dive A School, Navy Divers are trained in any or all of the following:

NDs are then assigned to the Fleet.

Here they are further trained to perform underwater ship construction, salvage, and repair using either a surface-supplied-air diving system or SCUBA Equipment prior to deploying to the fleet.

They should also pursue warfare qualifications depending on their duty station, such as ESWS (Enlisted Surface Warfare Specialist).

The Navy provides online training to qualified NDs through their Credentialing Opportunities On-Line website, referred to as Navy COOL.

Advanced training such as First Class Diver, Saturation Diver, and Master Diver occurs throughout a Navy Diver’s career and is held at NDSTC.

Although designated as Navy Divers after successful completion of Second Class Diver school, NDs are not authorized to wear the second class dive pin until qualified as a Diving and Salvage Warfare Specialist (DSWS) at their first duty station.

This normally occurs in one to two years.

How Much Are Navy Divers Paid?

In simple terms, Navy Divers utilize a variety of diving equipment to perform a number of duties such as:

Navy Divers work in a variety of different environments, some of them quite extreme. Trained to do so, as an ND you may work in deep seas or shallow waters.  You might find yourself in dark frigid arctic regions or in a clear-blue tropical ocean.

Navy Divers must have no aversion to confined, closed spaces.

NDs also should be extremely intelligent, possess manual dexterity and be resourceful. The ability to perform detailed mechanical tasks in adverse conditions under high stress is paramount.

A good memory is also a plus for the Navy Diver.

“It’s one thing to always want to travel to distant countries for meaningful memories. But to be able to do so while setting records of precedence in service to my country create unforgettable experiences and shared history with my peers that will last a lifetime.”

As LPO, Petty Officer Rodriguez was instrumental in helping his unit set a record in support of Operation Valiant Shield in 2018.

“My life has always revolved around the water, so diving was a natural fit.”

As Navy Diver Billy Sunday (portrayed by Robert DeNiro) in the movie Men of Honor bellows:

“The Navy Diver is not a fighting man, he is a salvage expert. If it is lost underwater, he finds it. If it’s sunk, he brings it up. If it’s in the way, he moves it. If he’s lucky, he will die young, 200 feet beneath the waves, for that is the closest he’ll ever get to being a hero.”

Sailors in specific jobs (or rates as the Navy refers to them) must adhere to a Sea/Shore rotation based on their rate.

Navy Divers enjoy one of the best sea-shore rotations of all the rates in the Navy.

During a twenty-year career in the Navy, an ND will spend about 50 percent of their career at sea, and 50 percent assigned to shore stations.

Specifically, the Sea/Shore rotation for an ND is:

Note that some overseas assignments count as sea tours.

Shipboard life and life on shore duty are drastically different.

The Navy expects NDs, as they do all their sailors, to adapt and meet the challenges presented by these different environments.

Here are a few reviews we happened across on indeed.com from ex- and current Navy Divers:

Also, advancement for an ND is excellent.

The Navy Diver Rating Information Card states that advancement opportunities are at an all-time high with future outlook looking good for growth.

Navy Divers enjoy the same benefits as do all Navy personnel, such as the opportunity to travel the world, unlimited opportunities for learning and advancement, and control over their career.

Related Article – How To Join The US Navy

Navy Divers, as are all sailors, are encouraged to take full advantage of on-the-job training (OJT), extra training opportunities, and educational opportunities offered and afforded them during their naval service.

According to cool.navy.mil, these apprenticeships include:

Navy Divers can seek national certifications in the following:

There are also several states which have licensing requirements that Navy Divers might meet.

If you are considering the US Navy, being a Navy Diver is not an easily traveled path, but based on reviews, quite a rewarding one.

If you are a road-less traveled type individual, in excellent physical condition, and comfortable in the water with above average swimming abilities, and have the wherewithal to endure the rigorous training, life as a Navy Diver might just be the adventure that awaits you.

ND1 Lehman Selected as Navy Diver of the Year 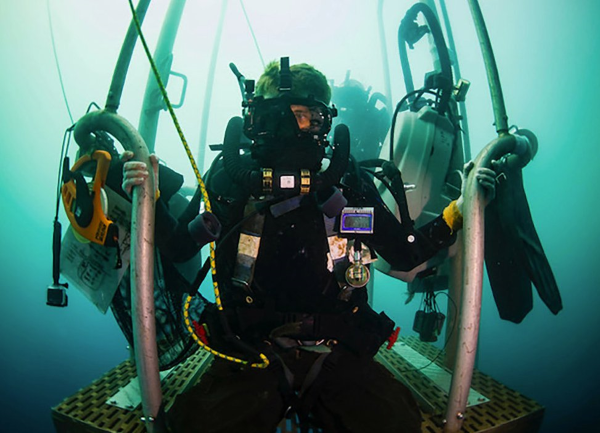 Learn more about what it takes to become a Navy Diver, including the requirements and qualifications, training and career path, overall pay, and the day to day life of a diver.