The Armed Services Vocational Battery (ASVAB) is a series of test used by the U.S. Armed Forces to help you find a Military Occupational Specialty (MOS) in the Army and Marine Corps, a rating in the Navy or Coast Guard, or an AFSC in the Air Force.

The MOS, Rating, or AFSC is your given military job/career, and each specialty has different ASVAB requirements.

Learn more about the ASVAB, what the testing requires, and the type of job you could qualify for in the Army, Navy, Air Force, Marine Corps, or Coast Guard

Minimum ASVAB Scores for Each Branch of the Military

The U.S. Armed Forces, regardless of the branch, requires you to meet a minimum Armed Forces Qualification Test (AFQT) score.

The Armed Forces Qualification Test (AFQT) is part of the ASVAB and basically sets a minimum overall score that every service member must meet.

Each military branch divides the minimum requirements based on if you have a high school diploma or GED.

You need one of the two in order to enlist in any military service.

Below are the minimum AFQT requirements you need to join the military branch you are the most interested in serving:

How ASVAB Scores are Graded

After you complete the Armed Services Vocational Aptitude Battery (ASVAB) you will receive a report with your scores.

The ASVAB is divided into several different sections:

As previously mentioned the Armed Forces Qualification Test is your overall performance score.

Meanwhile, the other nine sub-tests relate to the educational subject(s) most relevant to the MOS, AFSC, or Rating.

For example, someone interested in Electronics Repair would want to focus most on the subjects of Arithmetic Reasoning, Electronic Information, General Science, and Mathematics Knowledge.

Your score on each subtest, as well as the entire ASVAB, is determined as a percentile.

So, for example, if you score 70 on the Electronics Information subtest you performed as well, or better than 70% of others that have taken the ASVAB.

Performing Well on the ASVAB

Without a doubt, you want to take the ASVAB very seriously.

Perhaps you already have an MOS, Rating, or AFSC in mind.

Or maybe you just know that you wouldn’t like a mechanic job because you struggle with making repairs and don’t consider it one of your strengths.

The military tries to get you in a career track that you will enjoy, but the needs of the Army, Navy, Marine Corps, Air Force, or Coast Guard always come first.

With that said, if you perform well on the ASVAB, you open yourself up to more job opportunities, as well as potential incentives like cash bonuses.

Those that took the ASVAB once and feel like their performance on the testing does not match their education, training, or experience can speak with a military recruiter.

If the recruiter agrees with your appeal, he or she will grant you another opportunity to take the ASVAB.

There is basically a Military Occupation Specialty (MOS) for everyone considering the Army as it currently offers over 150 specialties.

The Army uses the aforementioned nine subtest categories to create line categories relevant to the type of MOS:

When you combine an Army line score with an Army MOS you can determine what the minimum qualification score is to work the MOS.

For example, an Infantryman (MOS 11B) would want to perform well in the subtests of Combat (CO), which are Arithmetic Reasoning, Auto & Shop Information, Coding Speed, and Mechanical Comprehension.

The Navy refers to their specialties as Navy Enlisted Classifications (NEC), or ratings.

There are currently over 60 opportunities to serve the Navy.

The Navy currently tests in the following subtests:

The complete list of available NECs and the necessary testing requirements on the ASVAB:

Review all of the AFSC currently available as well as minimum scores required:

The U.S. Marines have always been a military branch many new recruits have desired to join.

What would you do in the Marines?

Well there are a number of applicable Military Occupational Specialties (MOS) to select from.

The Marines are like some other branches of the military that combine several subtests into one category, or line.

Depending on your MOS preference you will want to focus on the following:

Below are the following Marine MOS jobs currently available to test for in the ASVAB:

The Coast Guard is just like every other military branch in that there are different military ratings and responsibilities of each service member.

Once again you have to meet the minimum ASVAB score posted in the table below in order to qualify for the rating:

The Armed Services Vocational Battery (ASVAB) is a very important series of tests used by the military.

It helps you find a career path that will match your skills as well as interest level in the specialty.

Every MOS has minimum requirements on the ASVAB to remain considered for the job.

It is important to be aware of these minimum expectations if you already have an MOS in mind.

Like any test it is important to study hard, take online practice tests, get plenty of rest the night before, and try to relax the day of testing. 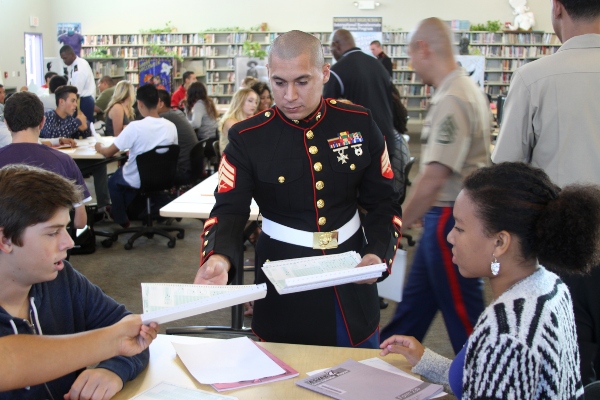 Find out what military jobs you can get with your ASVAB score. Includes the minimum ASVAB score needed for each branch of the US military.