There are several military branches in the United States, and there are some key similarities and differences between the Navy vs. Army.

While both the Navy and the Army are under the Department of Defense, they have different roles to play during combat and ensuring national security.

If you wish to join the military, it is helpful to understand the differences between these two service branches before making a multi-year commitment.

What is the US Navy?

The United States Navy is a maritime branch of service. Our Navy is the largest globally, and it is part of the Department of the Navy.

There are nine components in the Navy, and there are Navy bases all over the world.

The Navy has over 400,000 personnel between active duty and reserves.

Also, the Navy has over 290 ships ready for deployment, but there are many more in construction.

Furthermore, the Navy possesses over 3,700 aircraft.

What is the Navy’s Mission?

The Navy’s mission is the deliver combat-ready and equipped Naval forces anywhere necessary.

Since the Navy is a seaborne branch of the military, they are responsible for being prepared for war, maintaining naval aviation, and developing weapons and equipment for maritime combat.

How is the Navy structured?

The Navy works with the Marine Corps under the Department of the Navy.

Since the Navy is so large, there are two sections, including administrative and operations.

The Office of the Chief of Naval Operations is the executive branch of the Navy, and they issue orders to component commanders.

The component commanders work with fleet commanders, and it continues down the chain of command.

Also, the Operating Forces have nine components and provide force during wartime.

The Shore Establishment offers support to the Operating forces by handling the repair and maintenance of equipment.

Also, this section of the Navy runs the training of seamen and the medical and dental services.

What is the US Army?

The Army is a land-based branch of the military.

Also, the Army is the oldest of the components that make up the Armed Forces.

While the Army is land-based, it counts several aircraft and helicopters as part of its fleet, including the Black Hawk and Apache helicopters.

Also, the Army utilizes several weapons, including the M4 Carbine, the M24 Sniper Rifle, and the MK19 grenade launcher, to name a few.

What is the Army’s Mission?

The United States Army is a lethal ground force able to perform in a wide variety of combat missions.

Also, the Army’s goal is to win wars with swiftness and dominance.

There are units in the Army with highly specialized training for advanced combat. These groups include the Army Rangers and Special Forces.

Moreover, the Army gives continuous support to Combatant Commanders to defend the United States allies, handling ongoing peace missions, and working with the government to stop drugs from coming into the country.

How is the Army structured?

The Army is extensive, so it is necessary to break down the different groups and branches.

There are active duty and reserve soldiers in the Army. Also, those who serve are either enlisted soldiers or officers.

A soldier has a job, or MOS, in the Army, and this MOS determines the Army’s branch.

On the other hand, if your MOS is in Aviation, the Aviation branch has a home base in Fort Rucker.

When evaluating the Navy vs. Army, it is vital to consider critical differences.

One key difference between the Navy vs. Army is their responsibilities.

The Army is a significant ground force protecting both the United States and our allies and interests in other countries.

On the other hand, the Navy has a goal to keep peace at sea.

The Navy takes to the sea when the interests of the United States demands.

Also, the Navy works with the Marines to follow through with missions.

Furthermore, these two military branches use different equipment to carry out their responsibilities.

For instance, the Army is more likely to use artillery and tanks, whereas the Navy uses submarines, ships, and aircraft.

The Navy divides the command structure between administrative and operational.

The commands have combatant commands that handle the day-to-day operations of the Navy.

However, the Army has a different structure.

For instance, the Army has two distinct components, including the active component and the reserve component.

The reserve component is the Army Reserves and the Army National Guard.

The operational part of the Army includes the corps, divisions, brigades, and battalions.

On the other hand, the institutional Army handles the operational side by ensuring training and equipment are all addressed.

Both the institutional and operational sides of the Army go hand in hand.

If you wish to enlist in the Army as an enlisted soldier, you must meet some eligibility guidelines.

For instance, you must be a citizen of the United States or have a permanent resident card.

Furthermore, depending on your preferred job in the Army, you must meet the minimum requirements of the ASVAB test.

There are other requirements, as well. These include physical guidelines discussed during your physical as well as moral expectations.

If you wish to be an officer in the Army, you must have a college degree by the time of the commission. Also, you must be between ages 18 to 32.

Furthermore, you must be eligible for a security clearance.

The Navy has many similar expectations and the Army regarding the physical and moral standards and the citizenship expectations.

However, the Navy’s age requirements range from 17 to 39, which is a few more years than the Army.

First, the Navy goes by Time in Rate (TIR), which is determined by a sailor’s pay grade and job.

The Navy does not use the term rank like other branches of the military.

Instead, a sailor has a rate that depends on the job they do for the Navy.

Nine months later, a sailor passes an exam to become an E-3.

Next, size months as an E-3, a sailor takes additional training to become an E-4.

The time spent in each rate is called the Time in Rate (TIR) and coupled with advanced training, a sailor receives promotions.

The higher up in a seaman’s career, the promotions become more competitive.

For the Army, promotions work a little differently.

The Army, at first, uses Time in Service and Time in Grade to determine promotions.

Time in Service is the total amount of time served in the Army. Time in Grade is how long a soldier spends at any one rank.

The initial promotions are on a schedule and have a minimum time in grade to meet before becoming eligible for the promotion.

Also, the higher up in rank a soldier goes, the more promotions become competitive in the Army.

The Army limits the percentage of active-duty force commissioned officer tanks and enlisted ranks above an E-4.

The Army takes the number it has overall for each enlisted rank and divides it between the occupations.

For the most part, there are no differences in the benefits between the Navy vs. Army and any other branch of the military.

All service members who meet the expectations of their contract and the required time in service qualify for educational benefits, have housing benefits and receive medical coverage.

However, there may be some differences in benefits when it comes to enlistment or re-enlistment bonuses.

For instance, the Navy often has Enlistment Bonus for Shipping if a new recruit meets a deadline for leaving for basic training.

On the other hand, the Army has enlistment bonuses for some essential careers.

Potential members of the Armed Forces have many options for deciding which branch of the service is the best fit.

Also, understanding the difference between Navy vs. Army will further help narrow down the choices.

The Navy is the largest globally, and it has the mission to be combat-ready anywhere in the world.

Also, the Navy is mainly at sea and has close to half a million members between the reserves and active-duty forces.

Furthermore, the Navy has an operating force side and an administrative side, and the chain of command starts with the Office of the Chief of Naval Operations.

There are parts of the Navy that work at sea, and there are components on land that support the Navy with medical, training and maintaining weapons and sea vessels.

Furthermore, the Army is a land-based force highly trained for advanced combat.

The Army has active duty and reserve forces.

Also, the branches of the Army are broken down by MOS.

There are some critical differences between the two branches of service.

For instance, they have different responsibilities.

Also, the command structure is different.

The eligibility is very similar, as are the benefits available to those who serve.

However, the promotion process is different, as well, for instance. The Navy refers to the job and rank as ‘rate,’ while the Army considers Time in Service and Time in Grade.

Although, in both branches, promotions are more competitive with higher ranks. 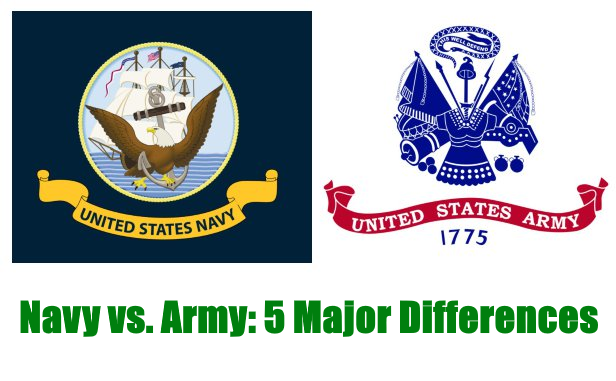 See the major differences between the Army and Navy, including their organizational structure, missions, responsibilities, eligibility, and more.