When considering joining the military, you might wonder which is the hardest military branch.

Typically, when contemplating this question, people think about boot camp. However, others might wonder which branch is the hardest military branch to get into.

Plus, training does not end with boot camp, and each branch has ongoing training depending on the MOS, or job.

Figuring out the hardest military branch depends on individual challenges because what is hard for one person might be easy for another.

However, recruits usually have their eye on the difficulties of boot camp, but we will cover tough training within each branch and required ASVAB scores.

Also, the 12 weeks of boot camp break down into three different phases.

The final phase includes your final drill, where you show off everything covered in boot camp and the 54-hour long crucible.

However, before you even get an opportunity to join the Marines, you must pass the Physical Fitness Test to ensure you have the physical stamina to make it through boot camp.

Also, the Marines require an ASVAB test score of 32, which is one of the lower acceptable scores for all military branches.

Furthermore, the Marine Corps is the toughest when it comes to age; you cannot be older than 28 to become a recruit.

Tough jobs within the Marines

If you can make it through Marine boot camp, you might find the challenge is not over. There are some tough Marine MOSs training to consider, as well, and we cover a couple.

Often, Combat engineers are on the front lines with those in the infantry.

Furthermore, Combat engineers go to all the advanced training and take what they learn to the battlefield.

Scout Snipers are another Marine MOS with excellent training in shooting.

To become a sniper, you must be a part of the infantry and hope you have an opportunity for a screening where the Marines weed out potential snipers to find the best.

Then, you might go to sniper school, where the passing rate is rather low.

The Army’s boot camp is 10 weeks long, and each week involves new challenges.

At the beginning of Army boot camp, recruits learn the Army’s regulations, rules, and values.

Next, introductions to the drill sergeant begin with working on both physical and mental endurance.

Soon, marksmanship becomes the focus as well as the marksman qualification training and course.

Later weeks include combat skills and a three-day Victory Forge that highlights all learned skills.

The Army has the lowest limit for the ASVAB score at 31, so those who do not test well may find luck with the Army.

Also, the Army has an upper age limit of 35 years old, which is one of the higher ages a recruit can be and still join.

Tough jobs in the Army

Many who join the military have aspirations of going into special forces.

However, the training before even making it to the official special forces training is, by design, going to weed out everyone but the best.

However, that does not mean those who do not make it are weak. The failure rate means the training is that hard.

Army Divers are another field with demanding training.

A Diver can conduct reconnaissance underwater as well as demolition and construction.

You learn about special warfare, explosives, hyperbaric, and a whole lot more.

After boot camp, there are 29 weeks of advanced training.

Plus, the ASVAB score for this field must be, at a minimum, 98 for General Maintenance and 107 for General Technical.

Boot camp for the Navy is eight weeks long.

Your first experience at boot camp for the Navy is your in-processing, where all the paperwork happens.

Then, you get into a routine.

At first, you learn about Navy life, take classes, and how to operate in the Navy.

Then, you work through your initial swim qualifications, learn about marching, and do whole lot of physical conditioning.

Eventually, you move on the marksmanship test, damage control on a ship, and make plans for your future Navy careers.

At the end of Navy boot camp, you have drill inspection and a lot of testing to ensure you learned what you need before advancing in the Navy.

The Navy allows recruits as old as 39 years, which is the same as the Air Force.

Related Article – How To Prepare Physically for Navy Boot Camp

Tough jobs in the Navy

Just like the other branches of the military, the Navy has its own set of challenging jobs (called ‘Ratings’ or ‘Rates’).

One of the more challenging jobs to get in the Navy is in the Nuclear Field.

This field of work includes several specifications, and both officers and enlisted members make up this field.

As an enlisted seaman, you might be an electronics technician, electrician’s mate, or a machinist’s mate.

To get into this field, you must score well on the science, electronics, and math sections of the ASVAB test.

Once through boot camp, the first round of advanced training, called ‘Nuke School.’

Then, depending on which area of Nuke you are in, you have more schools between three to six months in length.

Also, the second school is not the end of it because you still have a six-month training program where students learn, hands-on, how to operate a nuclear propulsion plant.

The community of seamen making up Special Warfare is close to 8,000 strong.

However, the Special Warfare Operators, or SEALs, make up a smaller percentage of the community (about 2,400 active-duty).

Just getting to the training (BUD/S) in Special Warfare is tough. However, making it through SEAL training is something else entirely.

Your time at Lakeland Air Force Base at Air Force boot camp begins with a physical fitness assessment to see where you initially stand.

Also, you will learn the basics of Air Force customs and other expectations.

Next, you begin some classroom training that covers Air Force history, weapons, drills, and you will also continue physical fitness.

Around week three, you have a physical fitness assessment where you face being recycled into a new group if you are not on track.

As your training continues, you pick up on combat skills.

Upon completion of Air Force basic training, you’ll move on to Advanced Individual Training (or AIT).

The Air Force has one of the stricter requirements for the ASVAB test. You need a minimum score of 36 to join.

However, if you are no more than 39 years old, you have the potential to join the Air Force.

Tough jobs in the Air Force

The Air Force has several MOS opportunities, and some jobs are rather intense.

For instance, a career in Cyberspace Defense Operations means you handle cyberspace capabilities for the Air Force.

Your skills include defending against cyber-attacks and handle command and control of cyberspace forces and operations.

Those in this field tend to have a lot of STEM experience, and some have some college coursework in technology.

Technical training is 66 days to become an apprentice.

The field itself has ongoing and continuous training throughout your career.

Another tough career option in the Air Force is the Survival, Evasion, Resistance, and Escape (SERE) Specialist.

A SERE Specialist’s goal is to train others to survive in all situations.

In this field, you are an expert in hostile territory and have the know-how to complete a mission when things do not go as planned.

However, there is a minimum score of 55 in the General Knowledge section of the ASVAB.

Plus, there is a stamina and physical abilities test before you are up for consideration for this field.

If you make it, you have a SERE Specialist training orientation course.

Afterward, you have a nearly six-month apprentice course in Washington, where you will become an expert in your MOS.

While the Coast Guard might be considered the easiest military branch in terms of physical fitness, it is by far the hardest to join.

Because this branch is the smallest, their recruiting requirements allow them to be a bit more picky about who they let in (and who they don’t).

The Coast Guard has eight weeks designated for boot camp, which is conducted in Cape May, NJ.

Many recruits count the first week at Coast Guard training the most challenging.

There is a stringent test for the required knowledge, which is as important as the physical fitness tests.

The last three or so weeks of Coast Guard boot camp include learning your duty station and training in first aid, CPR, and getting ready to move on after graduation.

The Coast guard is one of the stricter military branches regarding age; you cannot be older than 31 years to join.

Also, the Coast Guard has the highest expectation for the scores on the ASVAB test.

You must score at least a 40 for consideration.

Tough jobs in the Coast Guard

While there are several tough jobs in the Coast Guard, a couple stands out.

Therefore, they must remain in top physical shape, and they have monthly tests to prove they are able.

The monthly test includes the usual push-up and sit-ups. However, rescue swimmers must demonstrate they can do a 500-yard swim within 12 minutes, an underwater swim for 25 yards, and a 200-yard swim while towing a buddy.

If you can make it through the initial course, you continue with your training.

Every military branch offers a challenge.

Also, every potential recruit has their own set of skills and abilities.

Therefore, what is deemed ‘tough’ for one person may not be a challenge for another.

When looking at the difficult challenge of military training and life, one must consider the physical demands of boot camp and the basic requirements that might hold someone up from acceptance into a military branch.

For instance, age can be a factor.

Also, the ASVAB test has its own set of challenges.

Lastly, once you get through boot camp, the added challenge of training within a military job can redefine how you look at the hardest military branch. 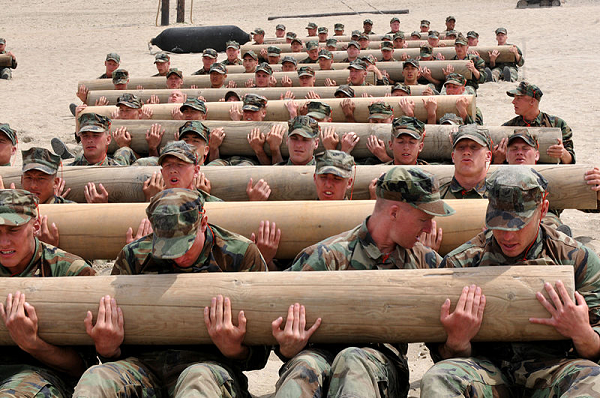 Find out what the hardest military branch in the US is, including why it's the toughest. We ranked all 5 military branches in terms of how difficult their training is, specific jobs, and more.